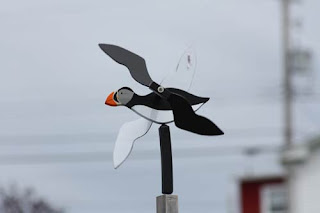 People go to Newfoundland for many reasons.  Three popular reasons are puffins, whales and icebergs.  If your timing is right you can arrive in Newfoundland right when all three seasons cross.  Iceberg season usually peaks in May.  The birds returning from the sea reach their peak in July and the whale population peaks just after that.   Between June and July if you are lucky you can catch the triple play. 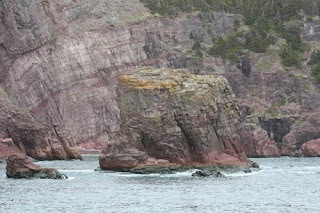 We took a boat tour with Gatherall's based out of Bay Bulls, Newfoundland.  Bay Bulls is the closest port to Witless Bay.  We had hoped to see the triple play while in Newfoundland and we hit a home run on our first outing.  The first thing you will see along the coast is the huge cliffs and rocks revealing their layers of history as they jut out into the sea.

We spent a great deal of time admiring the cliffs, but what we came for was the wildlife. 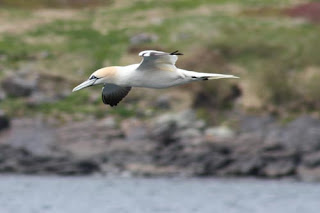 Before our boat tour had even begun we were treated to northern gannets flying by.  These birds have a long sleek body that changes from white to yellow near their head.  They have bright blue eyes. 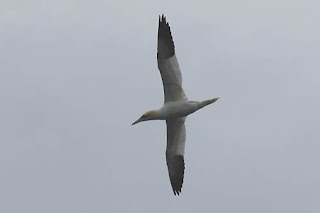 Gannets will fly high over the water and when they spot a fish they will dive bomb straight down and capture their prey.  In order to do this they have special adaptations so that they do not get a concussion when entering the water.  Their nostrils are located inside their beak instead of on the exterior and more importantly, they have special air pockets in their heads and chest which reduce the impact as they hit the surface of the water. 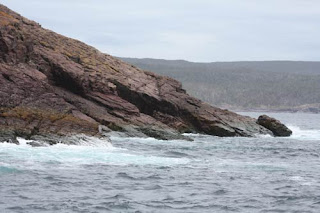 As the boat moved further along the coast, we were treated to a bald eagle soaring overhead.  Our guide also pointed out some black guillemot and we managed to catch a glimpse as they hurried past.  Black guillemot are black birds with red legs and a white patch on their wings. 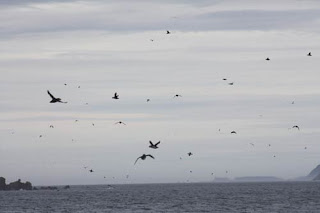 The Witless Bay Ecological Reserve is made up of four islands.  They are Gull, Great, Green and Pee Pee.  During breeding season there could be well over a million birds in the area. We were headed to Gull Island and as we drew closer the birds made their presence known.  Soon the sky was filled with little black dots as if a swarm of bugs surrounded us.  Everywhere you looked birds were landing in the water or flying back and forth from the island they call home. 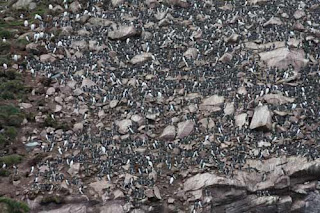 On Gull Island the birds crowd in for space.  The common murre (above) were packed very tight for space and breeding season had not yet reached its peak.  As one may expect from so many birds in such a tight space there is a lot of waste and yes we could smell it.  They don't waste space but waste in their space.  The murre lay eggs which are very pointy as this allows the bulkier end of the egg to stay up and out the build-up on the cliff face. 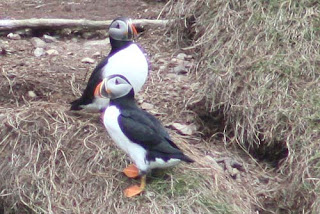 There are over 260,000 puffins that spend almost their entire year at sea and only return here for overcrowded breeding. 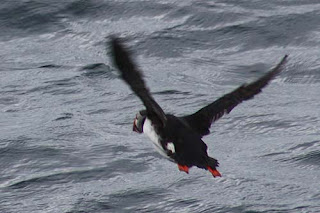 Immature puffins will not return for several years after birth until they are able to breed themselves.  The puffin has a distinctive colourful beak and puffy cheeks which make it the favourite bird on the tour. 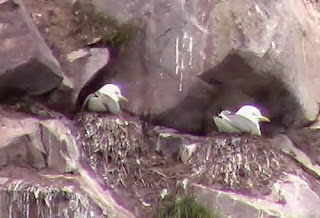 Other birds included the black-legged kittiwake which looks very similar to a regular seagull.  Seagulls normally have pink or yellow legs so if you see a seagull with black ones, it is probably a kittiwake. 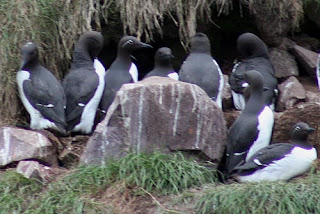 Common murre are also know as common guillemot.  The breeding plumage around their eyes makes it look as if they are wearing glasses.  One would image that with thousands of almost identical birds on the cliffs, the process of finding your mate when you return would require all of your senses. 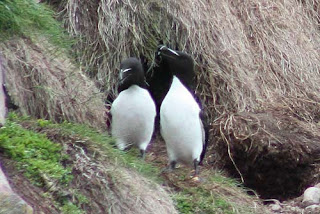 Razorbills are also black and white, but have a white line along their beak. The razorbills seemed to be far out numbered by the puffins and murres of Gull Island. 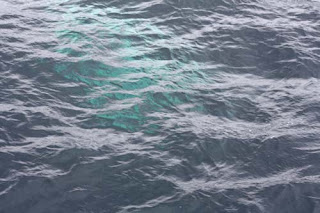 As we spent our time watching little birds fly over our heads, the whales did not want to be forgotten.  A white shadow beneath the surface passed under the boat. 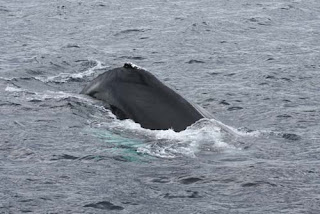 A humpback whale took a breath and then dove back down below the surface. 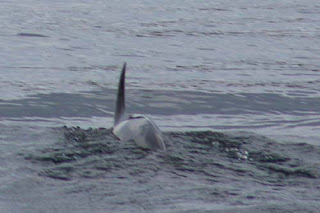 As the boat headed into the bay a smaller minke whale also made a brief appearance. 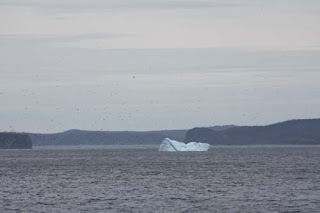 While ducking the little birds of Gull Island we saw something floating in the distance.

This was an iceberg that had likely travelled from Greenland to wind its way around Newfoundland.   It has been slowly melting the whole time as it made its journey. 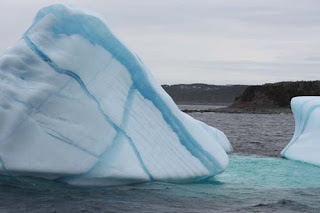 The blue veins would be filled with pure glacial water and made a beautiful pattern across the berg.  Now we had seen it all.  After enjoying the natural beauty, the only thing left to do was be screeched in.  A soggy foot, a wet puffin doll in the face and a mouth full of rum later and we were now true Newfoundlanders.

The Freshman At Woodbine Centre 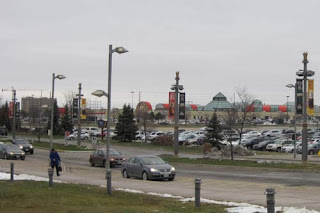 In the movie The Freshman, Matthew Broderick plays Clark Kellog (like the cereal) a college student who ends up working for a local mobster.  Marlon Brando plays almost the exact same role he played in The Godfather, but this time for comedic effect.  The first job for Clark is to pick up a package from the airport.  He brings his roommate (Frank Whaley) to help him out. 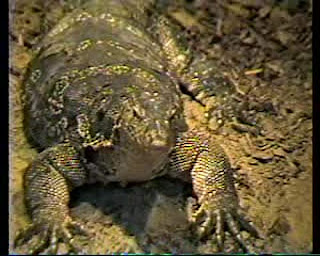 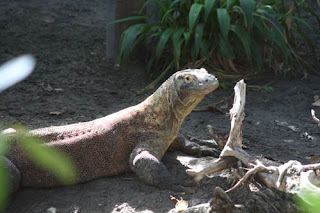 It turns out that the package is actually an endangered komodo dragon.  The komodo dragon is the largest lizard in the world and is known for its strength and saliva.  The dragon in the picture (bottom above) is from the Toronto Zoo.  The other lizard above is a Malayan water monitor also from the Toronto Zoo.  As everything in Hollywood is not as it seems, this is the lizard type that played the role of the komodo dragon.  It is smaller and safer for actors and crew to handle, but according to interviews it was still a handful.  Actually it took several monitors to play the role. 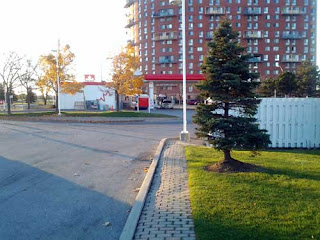 After securing the lizard in the car, it throws up and the smell is so bad that they decide to stop at a gas station to clean up.  The filming location is a gas station at the corner of the Woodbine Centre parking lot in Toronto. 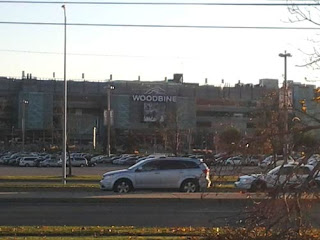 The mall is located across the street from Woodbine race track which is a popular location for its casino and horse races. 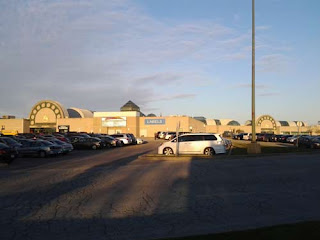 The lizard gets out of the car and runs from the gas station and into the parking lot.  Clark and his roommate are in hot pursuit as they look for the lizard under the parked cars. 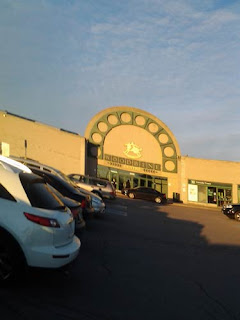 The lizard makes its way into the mall and causes a panic.  The mall entrance is easily identifiable by its curved design with circles that still remains today. 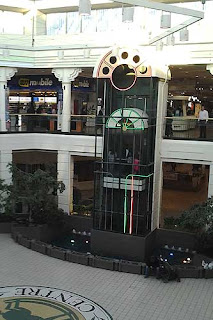 The reptile gets itself into the elevator and goes up to the second level.  By this point crowds are running around in a panic. 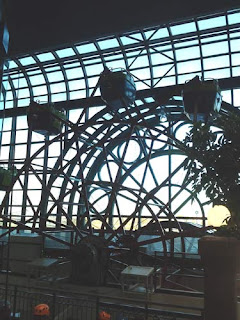 Clark and his roommate see the panicked people fleeing the mall and realize where their komodo has gone.  Woodbine Centre has an amusement park inside it called Fantasy Fair.  They enter the mall near the ferris wheel. 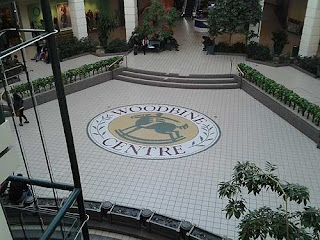 They also run right over the Woodbine Centre logo making it fairly obvious where these scenes were filmed. 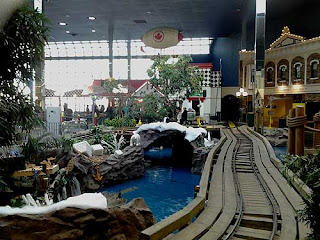 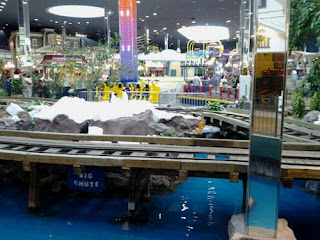 The lizard meanwhile has taken a swim near the bumper boats as terrified parents grab their children.  Clark and his roommate finally recapture the lizard right next to the "Big Chute" sign hanging from the train tracks.  They manage to sneak it back out of the mall and continue with their delivery.
You can visit Woodbine Centre and Fantasy Fair and have a fun afternoon.  While you are there remember that once upon a time Ferris Bueller ran around the mall with a monitor lizard pretending it was a komodo dragon.