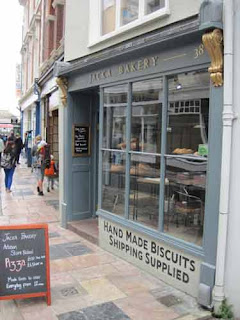 Jacka Bakery in Plymouth, England claims to be the oldest commercially working bakery in all of Great Britain.  It dates back to 1597 and has been baking since at least 1610.  That is over 400 years of history. 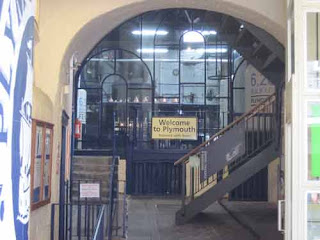 Up the street from the bakery is the Plymouth Gin Distillery.  It is only half as old as the bakery and has operated since 1793.  It was formerly Black Friars Distillery. 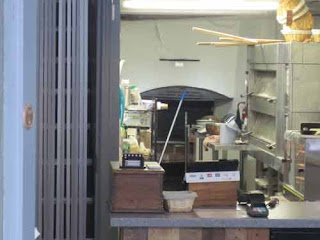 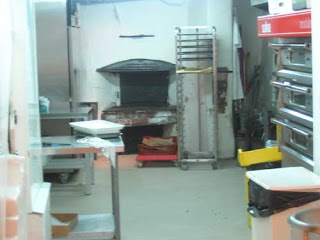 The bakery has seen many owner changes through the centuries.  It used to be the Fone's Bakery for many years.  One thing that has not changed is the brick oven at the back of the bakery.  Above are two photos of the oven.  The top one is from 2015 and the bottom one from 2007.  The oven is cast with this description. 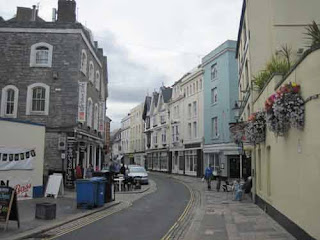 Next door to Jacka Bakery is Harbourside Fish & Chips where we also enjoyed a meal while visiting Plymouth.  At Jacka's we ate traditional Cornish pasties.   These baked pastries were filled with beef, potatoes, turnip and onions.  These days there are several variations available. 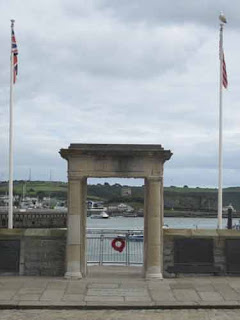 We also took home some biscuits to enjoy later.  It is rumoured that Jacka Bakery baked biscuits for the Pilgrim's voyage on the Mayflower in 1620.   The Mayflower set sail from Plymouth harbour just a short walk away from the bakery.   It took the Mayflower almost two months to complete her journey.  We hope Jacka's baked them a lot of biscuits.
Map of Our World 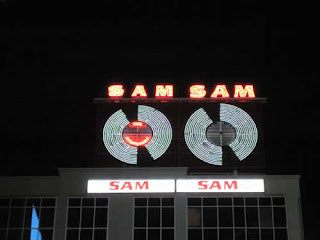 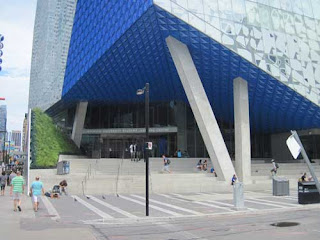 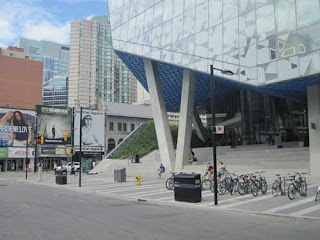 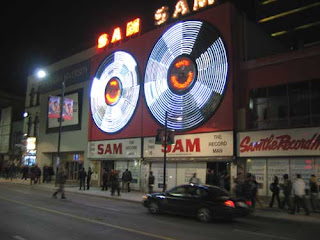 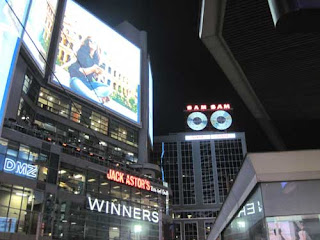 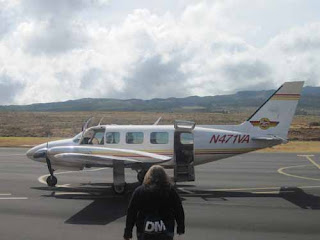 The Hawaiian islands were formed by volcanoes.  The island of Hawaii is usually referred to as the Big Island and is home to the most active volcano.  It has been erupting for close to 30 years.  We chose to book a small plane tour and fly over this volcano.  Why not?  The volcano is called Kilauea and has been erupting for decades.  It is currently wreaking havoc on homes on the Big Island.   A 6.9 magnitude earthquake at the beginning of May 2018 took things to a new level.  When we visited it was during quieter (but still not silent) times. 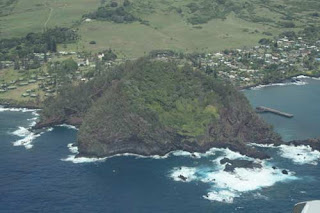 Our flight departed from Kapalua airport and it wasn't long until we were flying along the Maui coastline. 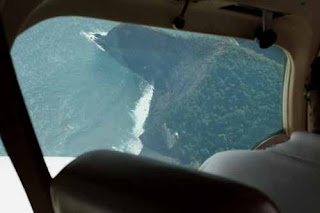 Our pilot was Captain Billy and he made sure to turn the little twin prop plane so that we could get a bird's eye view looking straight down at the coast.  To get from Maui to the Big Island we had to travel across the Alenuihaha Channel.  The channel is about 47 km wide and for a while there it was just Pacific Ocean as far as the eye could see in every direction.   We were glad when land came back into sight. 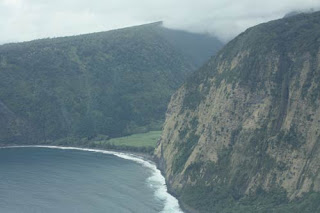 The Big Island has beautiful valleys. 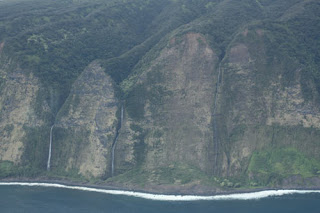 It also has the Kohala cliffs which have waterfalls streaming down the side. 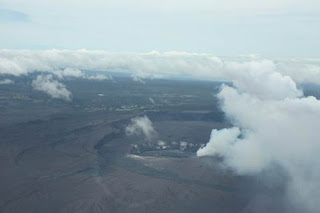 And of course it is home to the Kilauea volcano.  As we approached the crater we could see steam rising into the air. 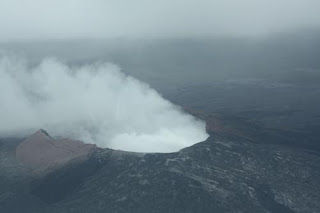 Captain Billy made sure we could get a good view.  We got closer to the mouth of the volcano. 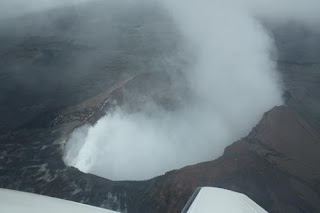 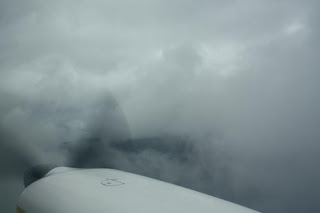 And then closer still.   We could smell and almost taste the sulphur. The small plane was completely engulphed in sulphuric gas.  Looking out the window we could just see the propellers working to guide us through the thick smoke. 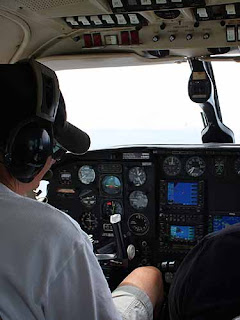 Traffic ! Traffic ! went the warning in our headphones.  A small buzzer sounded.   Lights flashed on the control panel.  As we emerged from the smoke we realized we were not alone.  Several other helicopters and planes were bringing tourists to take a look down the throat of Kilauea. 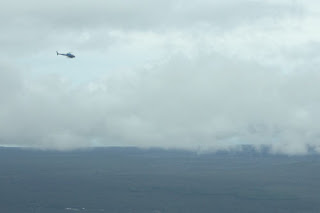 As our plane turned sharply to give us another view, the combination of gas and turning started to take its toll.  We started to sweat in our big noise cancelling headphones.   Traffic ! Traffic !  went another warning as we turned yet again.  We felt a bit queasy.  Many people including at least one of us are quite allergic to sulphur. 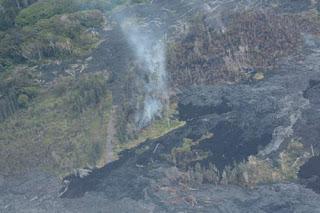 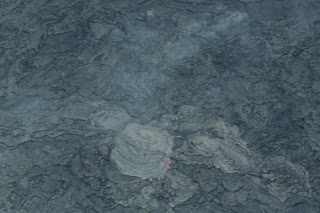 We moved away from the main plume coming out of the volcano and we started to feel a bit better.  On the edges of the volcano we could see flashes of bright orange lava along with the dark grey from lava that had cooled and formed a crust.   Some groups of trees were on fire as the volcano's lava flow took them in its grasp.  We were in awe of the destructive powers of the volcano. 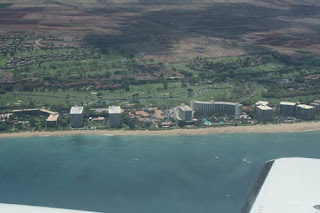 Eventually we left the Big Island behind and it wasn't long before we were headed past the hotel row near Lahaina.  One smooth landing later and we were back on Maui.  Captain Billy gave us the shaka sign as we said goodbye and left him beside his plane on the runway.   He would probably be re-fueling and then doing it all over again.  We can always re-live it all over again in our memories as we watch the sun set across the Pacific.