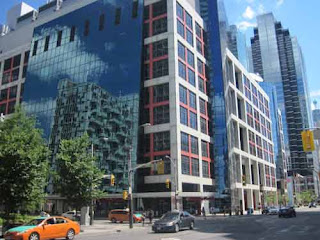 
Canadian television show Shitt's Creek won a total of nine Emmys at the 2020 Emmy Awards Show.   This set a record for any comedy series and the wins were especially shocking for a Canadian show.  The show stars Catherine O'Hara and Eugene Levy of SCTV fame and various movie and television roles. The main cast also includes Eugene's son Daniel and actress Annie Murphy. They all went home with awards hand delivered to them during the socially distanced broadcast.

Congratulations to you all!

Schitt's Creek is the story of a wealthy family that loses everything and is forced to live in a small town motel.  We were able to visit a part of that motel at CBC studios in Toronto. 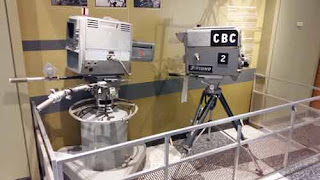 We were at the studios to watch the taping of a show that will never win an Emmy.  We were there to see Family Feud Canada.  In this version of Family Feud, Steve Harvey has been replaced by Canadian host Gerry Dee.  In order to qualify for an Emmy your show must be on an American network.  Schitt's Creek qualified since it was on Pop TV and Netflix. 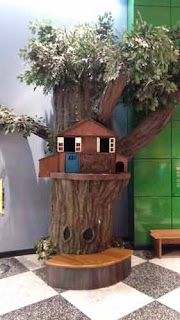 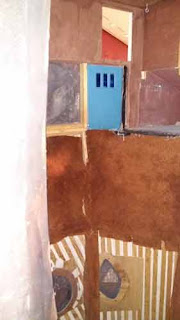 We waited in a huge lineup in order to enter the studio for our Family Feud Canada taping.  At the front of the line they were storing cellphones and other items before taking people up to the studio by elevator.  They take away your electronics in order to keep anyone from leaking any behind the scenes footage of the show.  While waiting in line we took turns exploring and we were able to take some behind the scenes footage of Casey's treehouse from Mr. Dressup.  Canadians of a certain age may fondly recall this show and enjoy a glimpse from behind the little blue door (above). 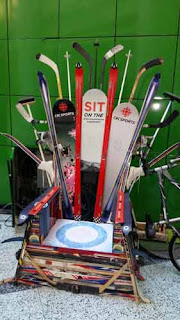 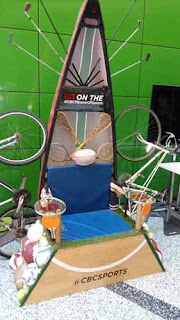 CBC is also known for their Canadian sports coverage.  We particulary enjoyed their Olympic coverage with sportscaster Brian Williams.  In the foyer there were a couple of chairs made out of a wide variety of sporting equipment. 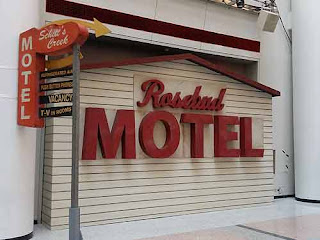 On the other side of the foyer was the Rosebud Motel from Schitt's Creek.  The final season had finished filming and the prop motel sign had been brought to the studio for fans to view.  The real motel used for filming is about one hour's drive north of the CBC Studios in Orangeville, Ontario. 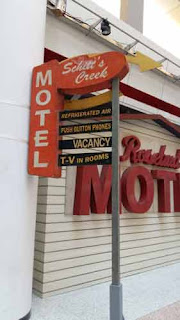 With the added exposure brought to the show by it's Emmy Award sweep, we are sure a new wave of Schitt's Creek  fans will want to connect with the down on their luck Rose family.  If the prop is still at the studio they can do just that.  Family Feud Canada is airing its second season in October 2020 if you want to connect with other Canadian families hoping to increase their fortune by $10,000 dollars.