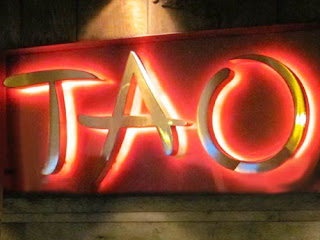 We arrived at TAO Downtown on a busy weekend evening.  TAO offers Asian cuisine like dim sum, sushi and more all in a mysterious setting.  We encountered a long corridor which was lit by candles.  We slowly moved down the dark corridor towards our dining destination. 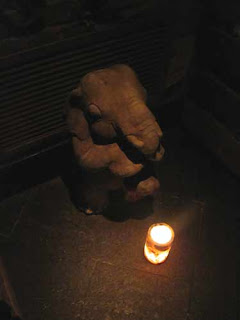 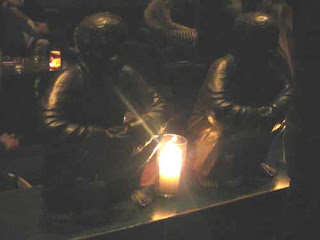 Tucked in behind the candles were different sculptures and artwork.  Sitting men and elephants watched us as we made our way deeper into the restaurant. 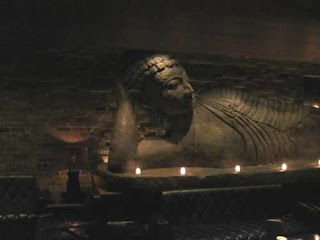 We turned a corner and there was a reclining Buddha.  According to TAO's website, the Buddha’s position signifies tranquility and serenity that comes with enlightenment and represents the final passage into Nirvana. 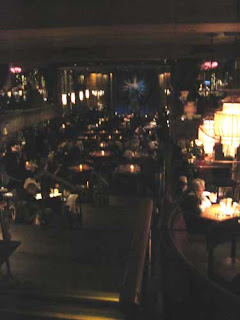 We turned around again and found ourselves at the top of a grand staircase looking out across the restaurant.  It felt like we were entering a large temple.  We were led down the staircase to the main dining area below. 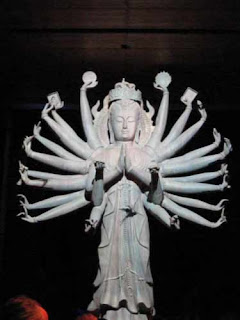 At the far end of the dining room stands Quan Yin.  Quan Yin is the goddess of compassion and has 24 hands. 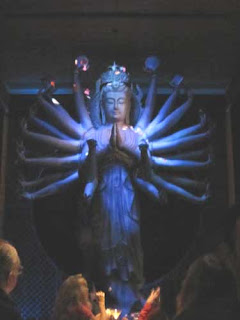 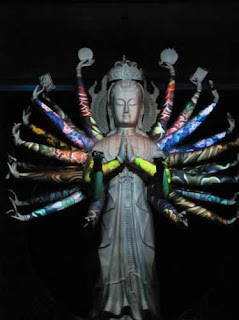 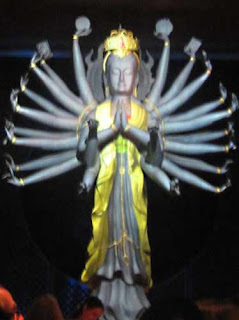 3D projection makes Quin Yin appear in different colours and outfits.  At some points it looked as if birds were flying past her or if a waterfall was flowing over her.  All of this and we haven't even ordered our food yet. 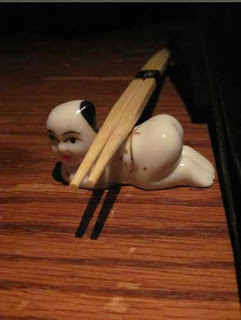 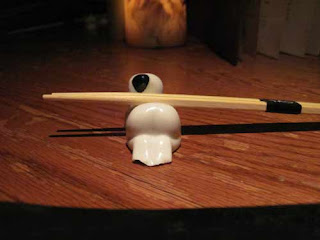 Our group ordered various items from the menu and everyone was pleased.  We also loved the cute little chopstick holder man even if he was a bit cheeky.  After our meal we climbed back out of TAO's temple and into the busy Manhattan streets having had a memorable dinner adventure. 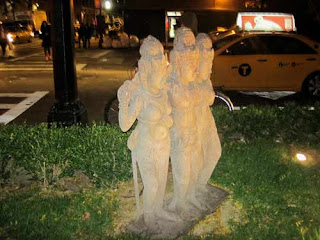 Super Dave King Of The Road 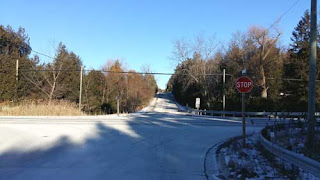 Since the passing of Bob Einstein we have been watching a lot of Super Dave clips online.  One of our favourites is when Super Dave plays piano on top of a bus to help get rid of profanity on the highway.   Knowing that the show filmed in Scarborough and Markham, Ontario we thought "We could find that place.  It couldn't be that hard?"  So we put a couch on our car and gave it a try. 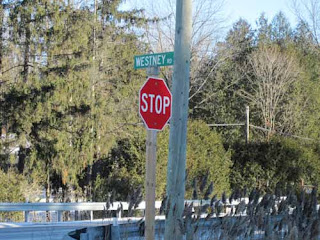 We noticed Westney Road on a sign behind Super Dave when he and Fuji arrive after being introduced by Mike Walden. 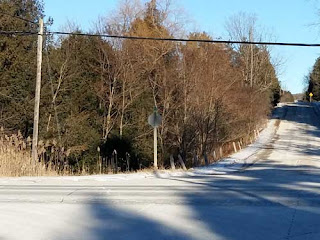 In this picture you can see the stop sign where Super Dave's tour bus was parked.  The tour bus is parked facing oncoming traffic and headed north. The idea is that Super Dave is going to go on a week long tour singing songs from the top of the bus.  He has everything he needs.  On the roof of the bus is some patio furniture, a barbeque an exercise bike and a piano. 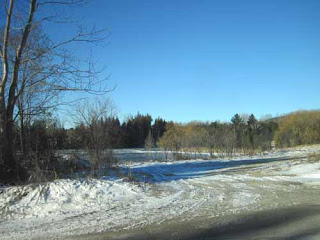 Super straps himself onto his piano bench and asks Fuji to put on his favourite song.  That song is Roger Miller's King Of The Road.  It isn't long before we see the bus drive past the pond in the photo above.

"Trailer For Sale Or Rent. Rooms To Let Fifty Cents." 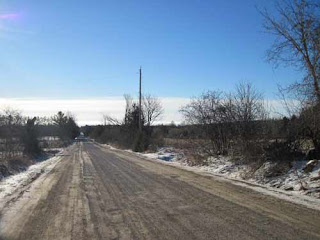 The bus heads up the road and Super Dave is really enjoying himself singing along.  He is having sensational fun. 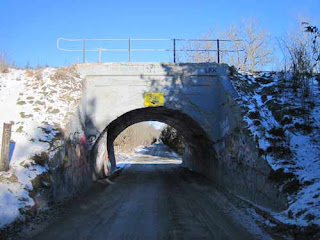 Now no matter how many times Super Dave gets hurt doing something, we still find it incredibly funny.  Westney Road goes under a train bridge.  Super Dave's bus is just tall enough to make it.  Unfortunately someone singing and playing piano on top of that bus won't fit through the tunnel.  A sign on the bridge states that it is 3.4 metres tall.  That is about 11 foot 2 inches.  A coach bus can be between 10 and 11 feet high or even more.  You do the math.. 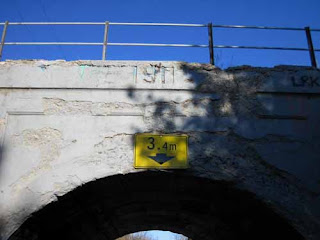 Super Dave, his patio furniture, his barbeque, exercise bike and piano all get crushed against the bridge and fall into the road.  We know this is the right bridge as it has the 1911 date on it like in the video.  It is also a safe bet that this is one of, if not the oldest bridge in the area. 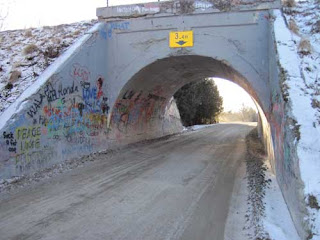 We also determined that Super Dave was travelling north when he hit the bridge as we checked both sides. The photo above is of the opposite side.  The deterioration of the bridge has continued but it is obvious to us that the south side is where the Super One collided.  There is also far too much graffiti inside the bridge and sadly none of it was even Super Dave related. 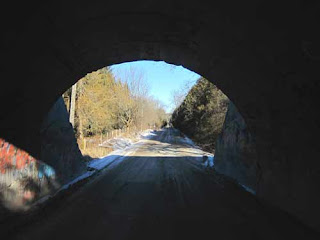 This last photo was taken while standing where Super Dave lay crushed in the road.  He clears a piano key out of his throat and changes his song to "On The Road Again".  Thanks for the ride Super, it was hilarious.
Map of Our World

King Of The Road
Post # 239
Posted by On Vacation at 12:30:00 am 4 comments:
Email ThisBlogThis!Share to TwitterShare to FacebookShare to Pinterest
Labels: Ajax, Canada, Filming Location, Ontario
Location: 5115 Westney Rd N, Goodwood, ON L0C 1A0, Canada 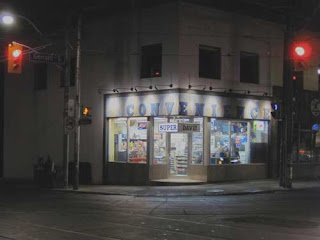 Super Dave Osborne was the greatest stuntman the world has ever known.  Actually he was far better at making us laugh than he was at successfully completing a stunt.  Super Dave was the creation of Bob Einstein and we have been laughing at the same joke for decades.  What will go wrong with Super Dave's stunt today?  Super Dave always starts out cheery and optimistic and then things go wrong and he ends up injured and censored.  Bob Einstein died January 2nd, 2019 and we thought we would highlight the Toronto connection with his beloved character. 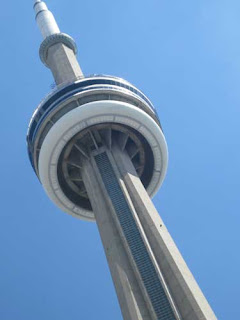 Super Dave was a regular on John Byner's comedy television program called Bizarre.  It was during Bizarre that Super Dave filmed his memorable CN Tower stunt.  Just one year after stuntman Dar Robertson jumped off the tower as Christopher Plummer's stunt double in the movie Highpoint, Super Dave prepared for his jump.  Super Dave is standing outside at the top of the tower with announcer Mike Walden.  Mike would be Super Dave's announcer throughout the Super One's career. 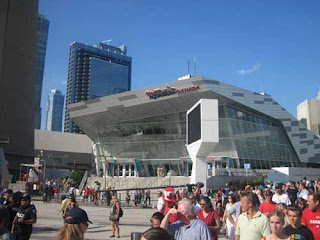 The stunt has to be called off due to high winds, but as Mike goes back inside the tower he hits Super Dave with the door.  We see Super Dave flail as he falls from the tower.  He lands in a parking lot that used to be just about where Ripley's Aquarium is today.  To add insult to injury, the ambulance runs Super Dave over and drags him underneath the vehicle. 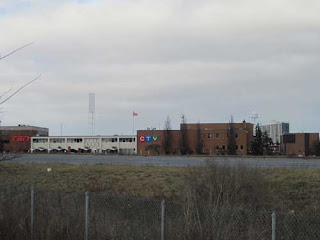 Bizarre was filmed at the Glen Warren Studios in Scarborough.  The buildings are still there today as CTV Studios.  The studios are located at number nine Channel Nine Court since 9 is the channel that the station broadcasts on.  One of us has been inside the studios to watch a taping of a television show called Circus which aired in the early 1980s.  In 1987 Super Dave was given his own show and it also filmed at CTV. 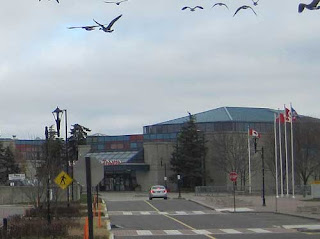 One of us was also lucky enough to see a taping of the Super Dave show when it moved to its new location at the Markham Theatre.  The show was filmed in Markham, Ontario up until it ended in 1991.  Each week there were specials guest performers along with a Super Dave stunt.  Super Dave would attempt his stunt strapped in with genuine Saskatchewan seal skin bindings but things never worked out as he planned.  We always knew something was going to happen when Super Dave attempted a stunt.  We would have a good laugh. 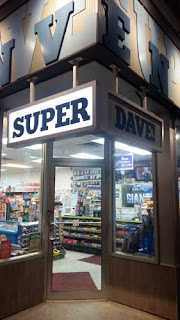 If you still need a little more of the Super One while you are in Toronto then you need to visit Super Dave! Convenience at the corner of Coxwell and Gerrard.  It has everything you expect from a convenience store.  Lotto tickets, candy bars, milk, magazines and more.  While you are there you can stand out front and give a big thumbs up with the words Super Dave up above your head.  Higher up still, in comedy heaven, you will find the legendary Super Dave.