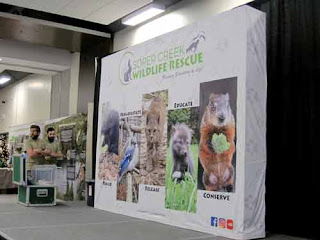 The Garnet B. Rickard Recreation Complex held a wildlife education event called Heroes for Wildlife. We attended and got to meet a few native Ontario creatures up close presented by different groups. We also were introduced to Soper Creek Wildlife Rescue and ended our day by making a donation which included a tour of their facilities at a later date. 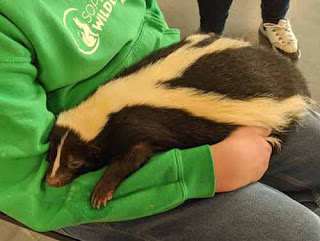 The skunk above is just one of the animals that we had a chance to meet at the event.  Soper Creek is lucky to also have a great team of volunteers. 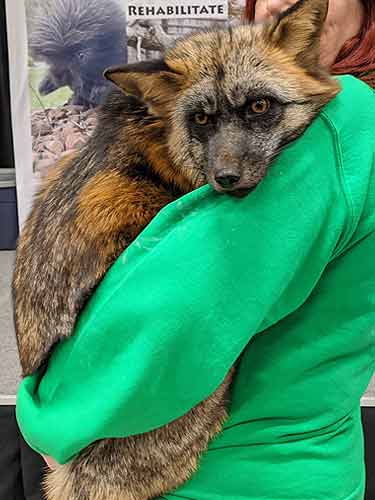 We also got to see a type of red fox known as a cross fox.  It has different colouring on its face and fur including a darker cross on its back.  All red foxes have white on the very tips of their tails.  We eventually had to say goodbye to everyone and  looked forward to our future tour. 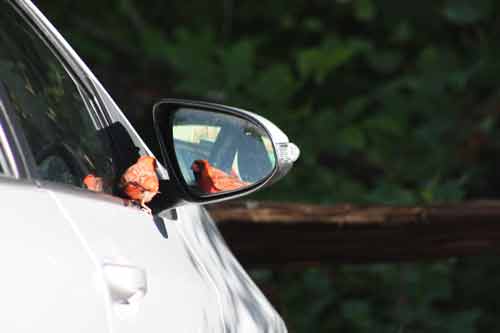 Finally, the day of our tour arrived.  We were a little bit early so we waited in the parking lot.  A cardinal kept flying back and forth and was checking himself out in the car mirrors.  He would take a good look and then fly towards the mirror and land on top of it.  He would take off again and then return and repeat the process.  We are not sure if he knew it was just himself in the mirror's reflection, or thought it was a rival male.  Perhaps it was time to check himself in to the Soper Creek rehab. 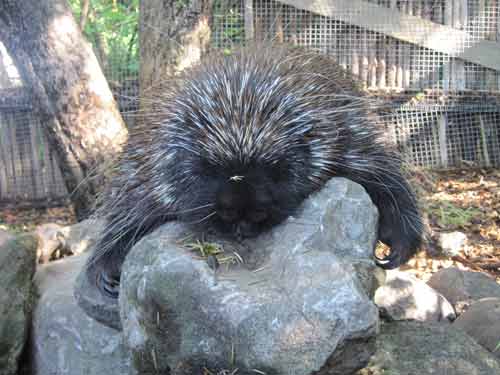 Our tour started and the first animal we visited was Minnie the porcupine.  She was on a special diet of no produce.  While we visited she slept sprawled out over a rock.  Minnie shared her enclosure with a sparrow recovering from an injury, several pigeons and a starling whose wing never quite formed properly.  There was also a group of sneaky chipmunks who would rush into the enclosure and tip over the bowls of bird feed as they tried to sneak off with a mouthful. 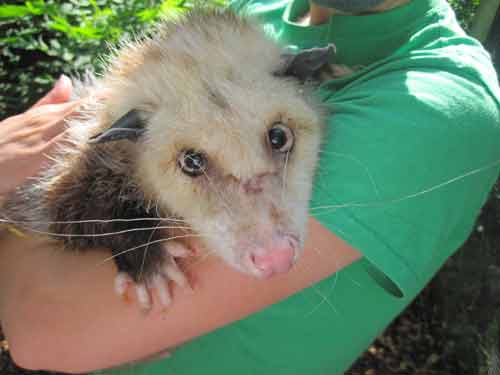 The next animal ambassador we met was Stella the opossum.  Opossums have been slowly moving further north and they are becoming more common in Ontario.  Just a couple of the reasons that opossums are unusual are that they are the only marsupial in North America as well as having the most teeth (50) of any land animal in North America. 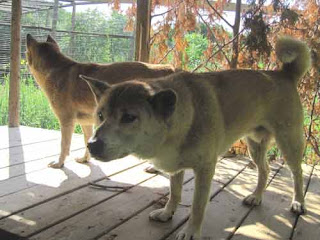 Most marsupials are found in Australia.   The next animals we encountered were from down under as well.  They are New Guinea Singing Dogs and are closely related to the dingo.  Their names were Mario and Luigi.  As we fed them a small snack they entertained us with a chorus or two. 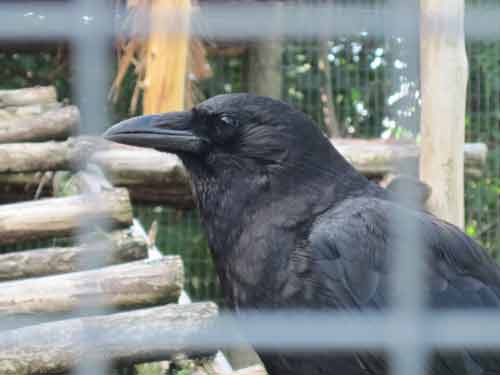 A couple of crows were in another enclosure.  One of them of was called Russell.  We think the Toronto Zoo also has a crow named Russell.  It is a very common crow name especially since the successful Gladiator movie. 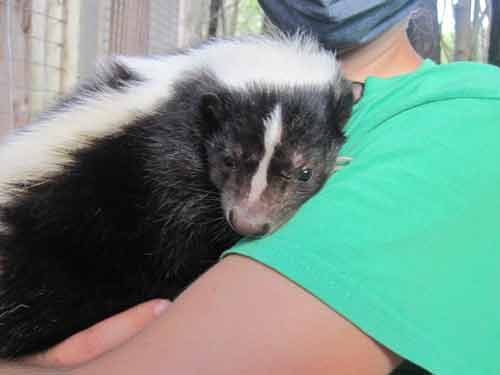 We had seen a skunk at the Heroes For Wildlife event. No two skunks have the same stripe pattern so it is easy to tell them apart.  Based on the stripes on this skunk we knew that we had met Persephone both times. 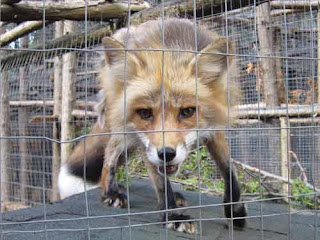 The next enclosures housed all kinds of foxes.  Actually only two kinds, but with different fur variations.  The photo above is of a red fox with traditional orange fur. 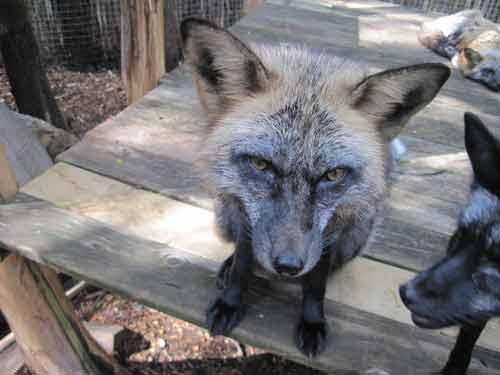 There were the cross red foxes which we had seen at the Heroes For Wildlife event.  One of the cross foxes only had three legs. 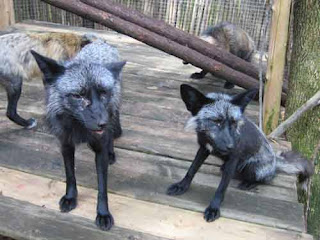 There were several silver foxes which are the melanistic form of the red fox. Again remember that all red foxes have white on the tip of their tail. 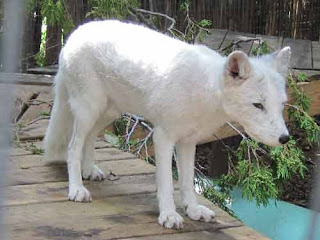 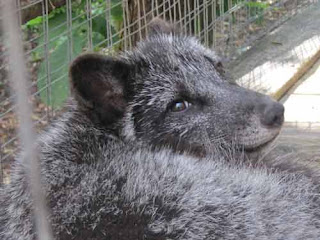 Soper Creek has red foxes and also arctic foxes.  The Arctic fox normally has a white coat of fur to hide in the winter snow and a darker coat for the summer.  These foxes were rescued from the fur trade so the white one had been bred to remain white all year round. 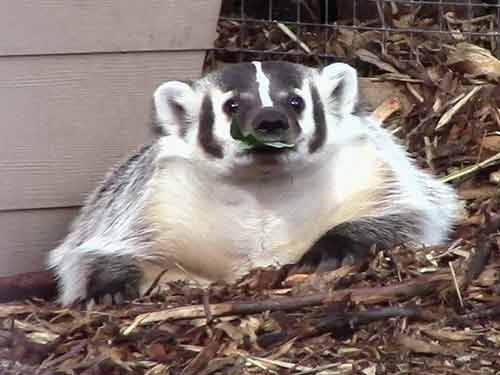 In one pen was a badger who wasn't quite so happy to see people. We took a quick look and the badger stomped around and got rather agressive.  It could have been some bugs or something else disturbing it, but it did throw us a serious look or two so we got the message and moved on. 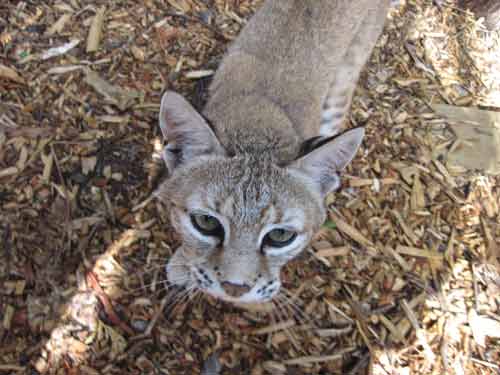 The last enclosure we went into was the bobcats. These two bobcats liked to spray and let us know this was their territory. Despite their relatively small size, bobcats can jump up to 10 feet high and take down a deer all by themselves. Just to prove this point one of them effortlessly jumped up onto one of our shoulders. A quick shoulder shrug brought it back down again. Thank you for the leaping demonstration and for skipping the taking down larger prey demonstration.  Thank you also to Soper Creek for helping so many wild animals in need and for giving us the chance to connect with some of these wonderful creatures.