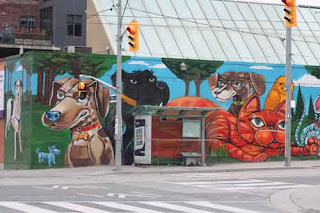 The Toronto Humane Society always has its doors open for stray animals.  During Doors Open Toronto it welcomed people to tour behind the scenes.  The Humane Society is always a place of great sadness when a lost or injured animal is brought into the shelter.  It can also be a place of great joy when these animals find a new home. 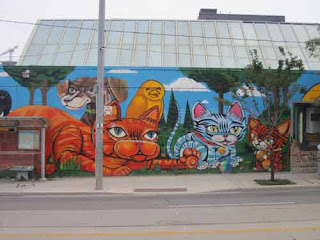 The Humane Society building is hard to miss thanks to a bright mural by artist Uber 5000.  The mural fills the entire wall of the building which is located where King Street East meets Queen Street East.  As always in any Uber 5000 artwork there are little yellow birds hiding in the background. 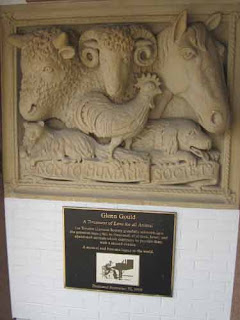 As we entered the building we noticed a dedication to thank Canadian pianist Glenn Gould for his contributions.  Glenn was alway known for his love of animals as well as his piano playing. 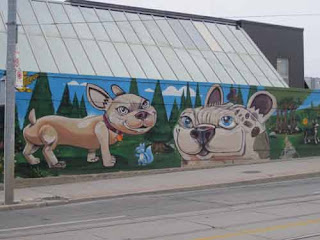 The first animals we visited were the dogs.  As our group gathered, a volunteer brought out a small black dog and worked his way through the crowd.  Behind him followed an older man who said "He's going to be my dog".  A huge smile stretched across his face.  This was not the only dog to be successfully adopted.  As the dogs yipped and barked for our attention we could see from the signage that most would be on their way to new homes soon. 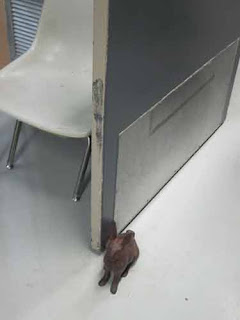 After the dogs we visited the special species section.  A bunny door stop held the door open for us. 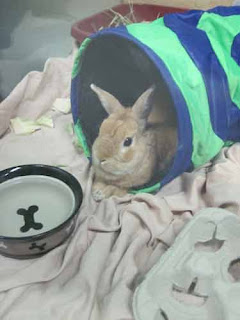 Just inside the doors was Carmel the bunny.  Carmel was doing her best to look cute and adoptable.  Getting a pet on impulse is a bad idea without understading the long term cost and comittment. 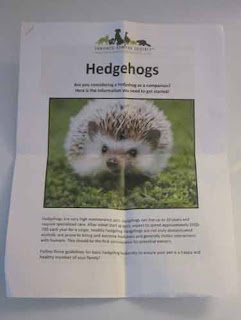 There were lots of information packages on caring for different animals.  We know a family who recently took in an African pygmy hedgehog so we picked up a booklet for them. 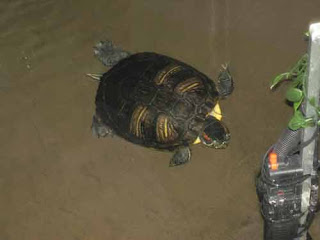 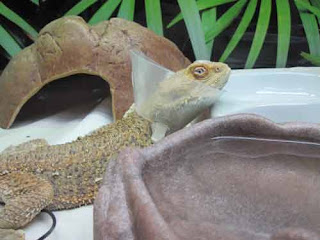 At the exit was a bearded dragon who was wearing a cone so he didn't touch or scratch where he shouldn't.  A note next to him stated that he was headed to a sanctuary. 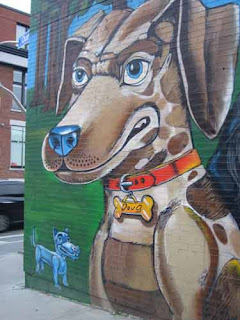 A lot of feral or street animals come into the shelter.  The only way to stop more and more of them from coming is to have them spayed or neutered.  This way they can no longer reproduce. 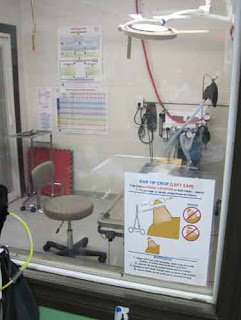 A sign in the operating area shows how they clip the ears of spayed or neutered cats so they can easily be recognized.  This prevents cats being rounded up for repeat surgery that they don't need. 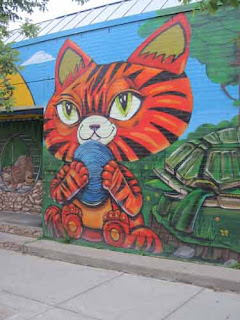 The shelter is also home to many cats.  Cats like yarn and thread which can be a problem. 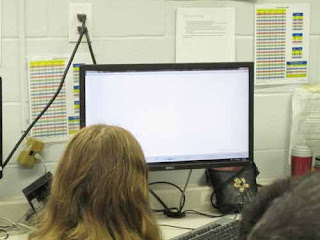 We were shown some animal x-rays that showed broken bones and some that showed needles stuck inside a cat.  Cats love the thread but dont realize a needle is tied to the end.  Any metal in an x-ray shows up bright white like bones do. 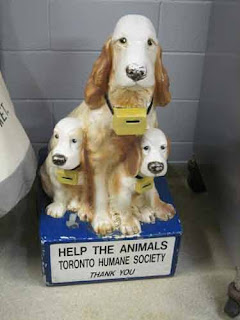 The Toronto Humane Society does a good job looking out for animals in our city.  They also do a good job for people who get the gift of a pet in their life.
Map of Our World 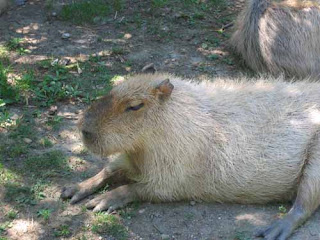 Some people may be surprised to learn that the world's biggest rodent is not a rat found in the New York subway system.  The title belongs to South America's capybara which weighs up to 65 kg, stands almost 2 feet tall and can grow up to 4 feet long.  We have come across capybara at several zoos, but had a real close encounter at the Toronto Zoo.


Diego the capybara lives at the Toronto Zoo.  The zoo just recently started some Wild Encounter programs.  We were able to learn more about him as well as feed him a treat of some fresh lettuce.  Capybara are herbivores and eat only plants.  In fact the name capybara translates roughly to "master of the grasses".  All rodents have teeth that constantly grow and must gnaw on things to wear the teeth down.  As we fed the lettuce we had to make sure not to get near those teeth. 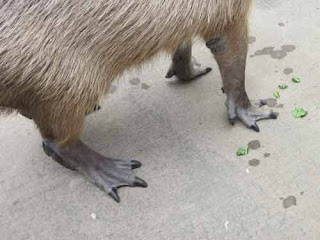 Capybara are semi-aquatic and spend most of their time in the water.  They have webbed feet which helps make them great swimmers.  Their nostrils and eyes are high on their face so they can breathe and see above the water, but if they have to, a capybara can stay under water for up to 5 minutes. 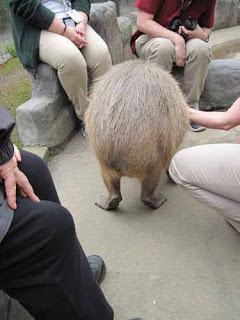 Capybara have a high rounded back.  Diego looks kind of like a coconut with legs in the photo above. 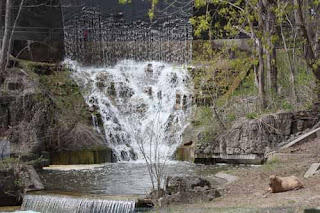 The other capybara at the Toronto Zoo can be found near the waterfall in the Americas section.  Diego prefers to keep by himself and lives in the Kid's Zoo not that far from his relative the guinea pig. 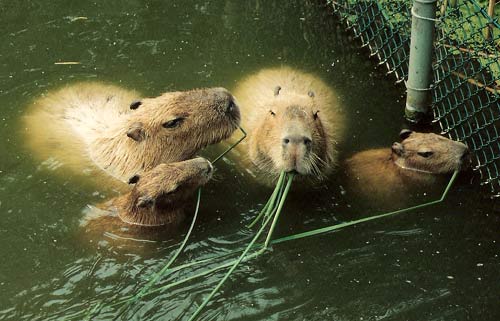 The keepers said that Diego was about 6 years old.   We think that the photo above may have been taken while Diego, his brother and parents enjoyed a family dinner together. 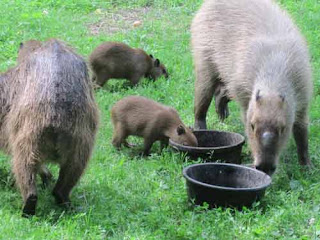 In Toronto there are also capybara at the High Park Zoo.  Two of the High Park capybara are famous for escaping.  One of them wasn't found for almost a month before being returned to the zoo.  In the photos and video above you can see the runaways with their babies.  Baby capybara are called pups. 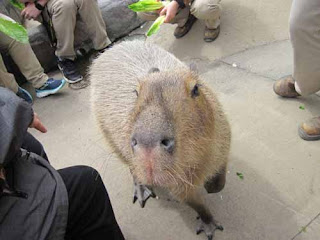 Feeding the capybara was fun and Diego was friends with whoever had a piece of lettuce.  Once all the lettuce was gone he went off to the other side of his enclosure to be by himself again.  It was great to see and learn about this amazing rodent up close.   Next time we are in New York City though, we would still like the rats to keep to themselves. 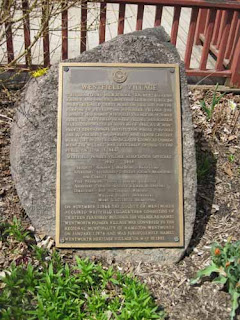 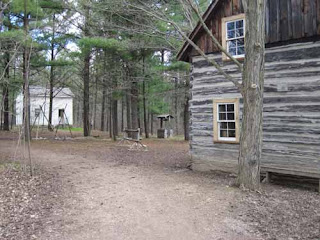 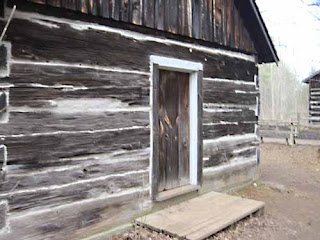 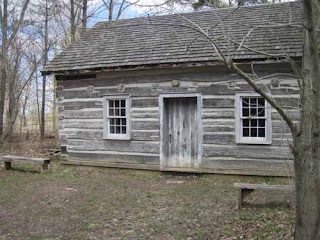 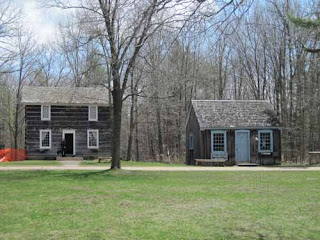 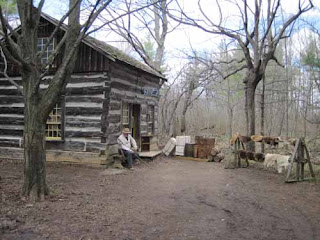 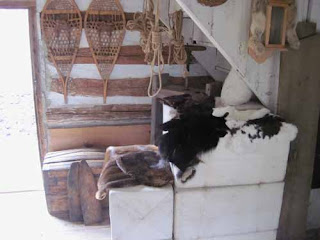 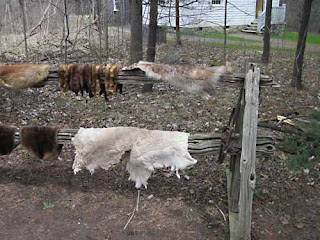