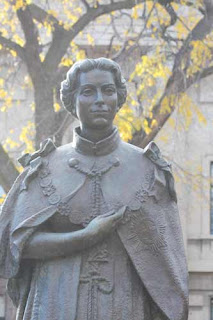 Queen Elizabeth II lived to be 96 years old and was Queen for just over 70 years.  She was not only the Queen of England but also other Commonwealth countries such as Canada.  Her reign was the longest of any British monarch.  Most of us have only been alive during her reign.  Sadly, she passed away on Sept 8 2022 and will now be succeeded by her son Charles.  In this post we look at a few of the places we have visited where the Queen was honoured. 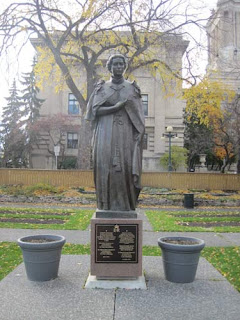 This statue of the Queen above can be found outside of the Manitoba Legislative Building in Winnpeg, Manitoba, Canada.  We wrote a short blog about it during the Queen's 90th birthday. 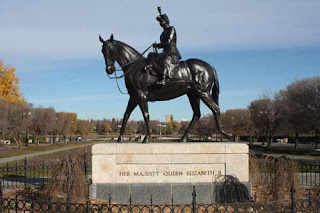 In the next province over we found yet another statue of the Queen.  This time she was riding a horse outside the Saskatchewan Legislative Building.  The name of the horse is Burmese.  Burmese was born in Fort Walsh, Saskatchewan. Burmese was given to Queen Elizabeth II as a gift from the Royal Canadian Mounted Police in 1969.  The Queen rode Burmese every year in the annual Trooping of Colour ceremony until 1987.  The Trooping of Colour happens each June and is also known as the Queen's Birthday Parade.  It involves over a thousand officers and hundreds of horses on parade during the ceremonies. 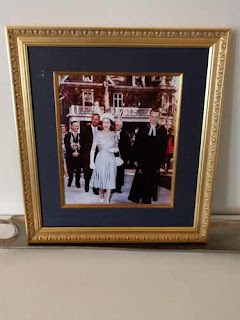 In Kingston, Ontario, Canada we once had afternoon tea in a place called the Secret Garden Inn.  After our tea, as we were leaving, we noticed a photograph in the front room.  The photo is of Queen Elizabeth II and was taken right in front of the inn. 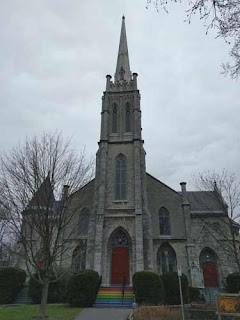 Had the Queen visited the Secret Garden Inn for tea?  Perhaps.  The photo was most likely taken as she visited the Sydenham Street United Church across the street.  This church is more commonly known as The Spire due to its long pointy top that can be seen all across Kingston. 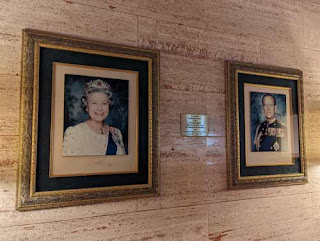 At the Royal York Hotel in Toronto, Ontario, Canada there is a special book that can be found in the lobby area along the far wall.  The Queen has stayed at the Royal York many times and stays on her own floor in the Royal Suite.  The photos above are of the Queen and her husband Prince Philip.  Philip, the Duke of Edinburgh, died one year before the Queen in April 2021. 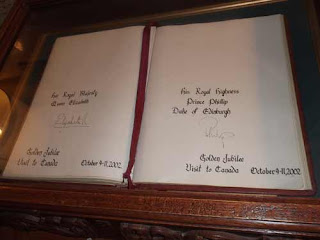 In a glass case sitting below the photographs is a book signed by Queen Elizabeth II and Prince Philip when they visited during the Golden Jubilee in October 2002.  They both signed using just their first names. 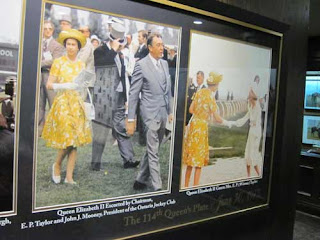 The Queen's Plate at Woodbine racetrack in Toronto was started with Queen Victoria's involvement in 1860.  Queen Elizabeth II has attended the event 4 times.  In 1973 she watched the horse races in a bright yellow dress.  The winning horse that year was named Royal Chocolate. 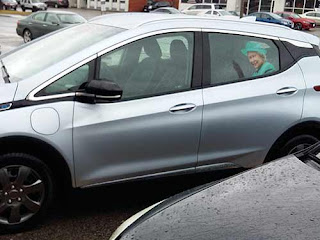 We once thought we spotted the Queen sitting in a car outside a Toronto store.  It turned out it was just a fun window decal. 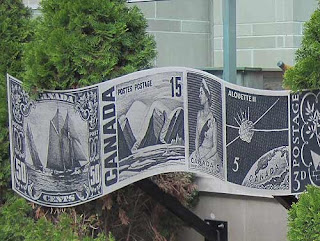 In Canada we are used to seeing the Queen's face everywhere we go.  She is on our money, our stamps and more.  The stamp pictured above is from a display on Adelaide Street East near Toronto's First Post Office. 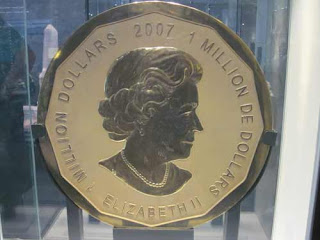 At the Royal Ontario Museum is a giant example of the Queen appearing on Canadian currency.  This million dollar gold coin weighs 100 kg and is made from 99.999% pure gold buillon.  The Royal Canadian Mint only ever made five of these in 2007.  At the time of release it held the Guiness world's record for largest gold coin.  Now that the Queen has passed we wonder what the coin's value is today.  Any new coins produced by the Royal Canadian Mint will now feature King Charles on them. 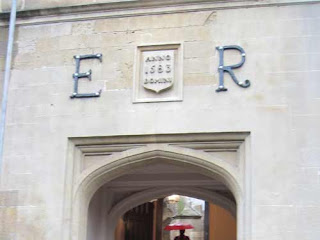 Aside from all the currency changes around the world there will also be changes to many structures throughout England and abroad.  This doorway at Windsor Castle has the Queen's Cypher hanging over it.  The letters stand for Elizabeth Regina. 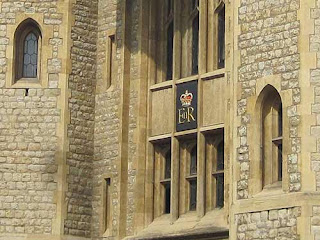 Normally the letters in the cypher are shown as E II R for Elizabeth the second.  This wall at the Tower of London is only one of the thousands of places which will now be changed to C III R for Charles the third. 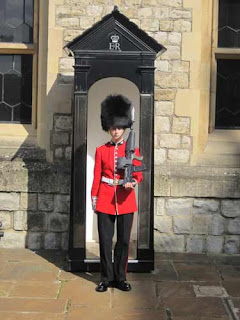 All of the guard stations will need to be repainted.  The Royal Guards are known to stand still and hold their post despite distractions or extreme heat.  Perhaps the painters will just set up a ladder and do their work around the stationed guard. 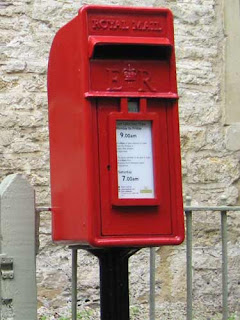 Post boxes across the country will need to be changed.  Some of these marked for Queen Elizabeth II may have been around for 70 years.  We are not sure how quickly or if these changes will even be made.  King Charles is already 73 years old so he will be very lucky if he can serve as Head of the Commonwealth for even a quarter of the time that his mother served. 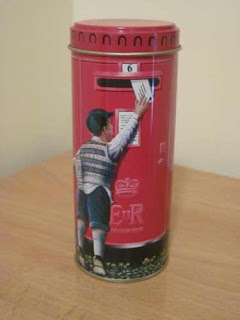 Even souvenirs such as this post box shaped candy tin will see changes.  You will be able to tell from the cypher if your souvenir represents the Queen or the new King.  We predict that anything with the Queen's cypher on it will become highly sought after. 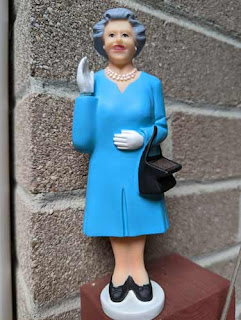 We also predict that souvenirs of the Queen will be around for many years to come just because she was so well loved.  Good news if you don't yet have your very own solar-powered, waving Queen figurine. 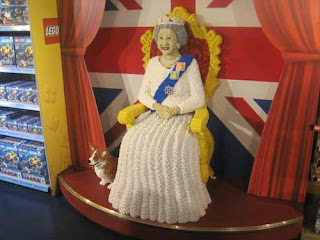 A Queen made completely out of Lego was once at Hamley's toy store in London, England.  It's too bad that this was not sold as a kit.  It might take a bit of time to build, but would be well worth it. 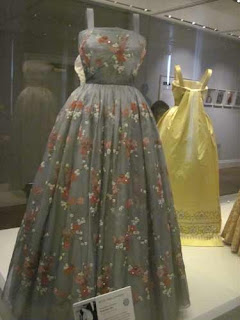 In Kensington Palace we saw some more personal items belonging to the Queen.  This flowered dinner gown was worn by the Queen during a visit to Nova Scotia, Canada in 1959.  The mayflower is the provincial flower of Nova Scotia. 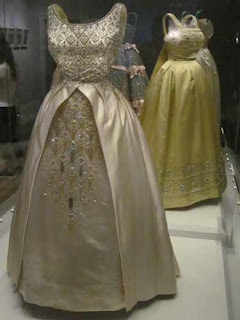 These two other dresses are a formal gown with beaded embroidery worn for the opening of the New Zealand parliament in 1963 and a yellow evening gown worn at the 1961 premiere of The Guns of Nazarene at the Odeon Leicester Square. 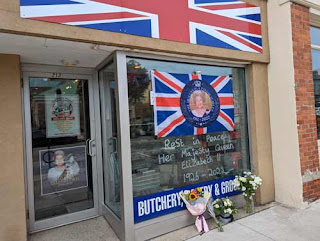 These are just a few of the things and places that remind us of the Queen.  Memorials like this one at a British Grocery store in Oakville, Ontario will be showing up everywhere.  She will long be remembered by many people around the world.