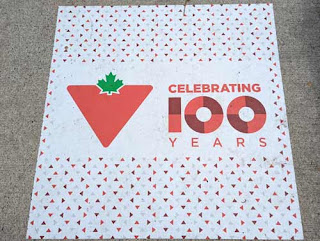 
This year Canadian Tire is celebrating their 100 year anniversary.  Canadian Tire stores sell more than just tires and have been providing automotive, hardware, houseware and sporting good needs to Canadians for a century.  As part of the celebrations, they worked with local residents in order to turn a Toronto street into a giant beach party for the Canada Day weekend.  Up and down Bastedo Avenue there were giant inflatable pool floats on every front lawn. 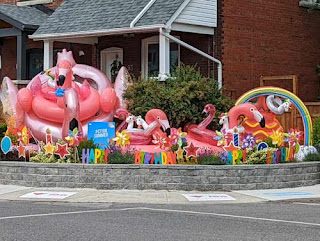 We are not sure how the theme for each yard was chosen.  Did the homeowners help set up the displays or did Canadian Tire send in a team?  There were lots of yards with flamingo filled displays. 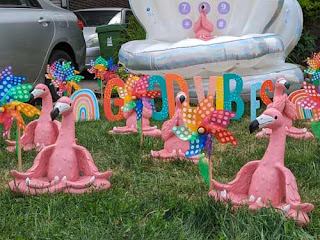 Some of the flamingoes were more chill than the others.  The flamingoes above were taking part in a yoga session. 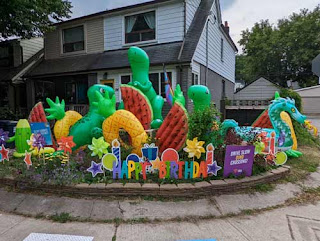 Another popular theme was dinosaurs.  In the corporate world some may say that Canadian Tire is a dinosuar.  Meaning that the company is old, not that it is no longer relevant. 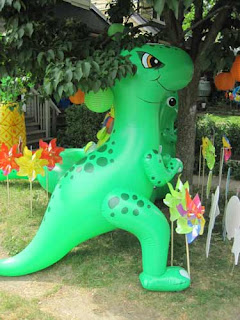 Canadian Tire is far from extinct.  Despite being one hundred years old, their website boasts over 500 stores and that 90 % of all Canadians are only 15 minutes away from a Canadian Tire store. 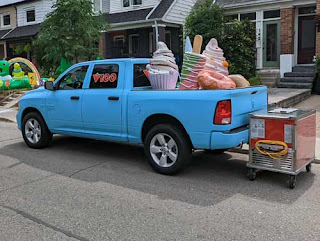 Parked up and down the street were some brightly painted pickup trucks.  This blue truck was full of ice cream. 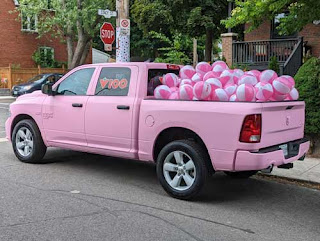 This pink truck was carrying a load of Canadian Tire beach balls. 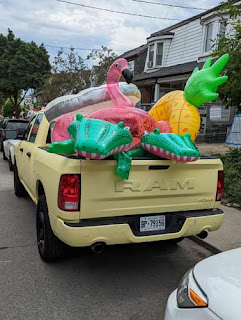 There was a yellow truck carrying a flamingo, a pineapple and a pair of crocodiles. 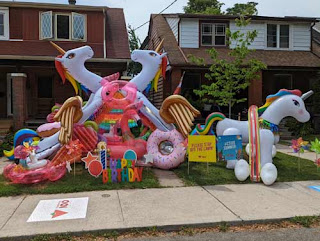 Seeing a unicorn was not an unsual thing on Bastedo Avenue that day.  The largest unicorn floaties were up to 16 feet long and could hold about 5 adults.  One of them would take up the whole pool and leave no room for little Johnnie to test out his water wings. 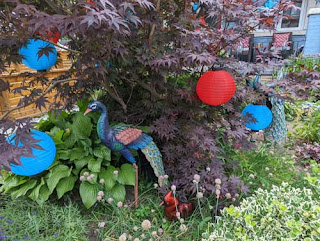 One of the yards had a nice display with a single peacock in front of their bushes. 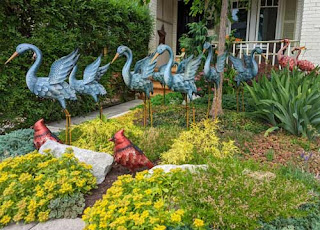 Other yards did not subscribe to the theory that less is more.  This yard had quite the flock and variety of birds.  If Canadian Tire is offering you free lawn ornaments why say no? 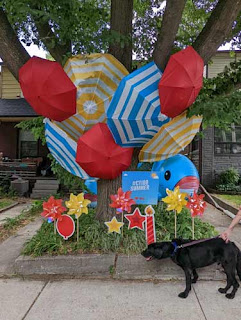 Another yard had a whale and a variety of umbrellas.  Luckily the weather was perfect all weekend or this display may have been picked clean by people needing to "borrow" an umbrella. 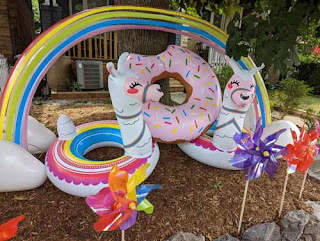 We started to get a bit hungry as we walked past donuts that were half eaten by grazing llamas. 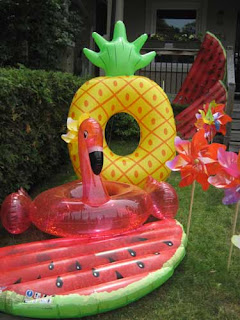 We started to feel like we needed some refreshment after looking at all these displays of watermelons, pineapples and pink lemonade coloured flamingoes. 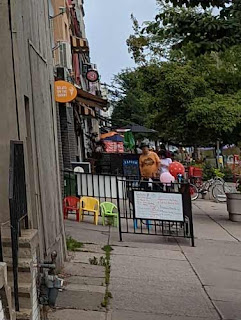 Thankfully at the top of Bastedo Avenue you can find Gelato On The Danny which can stop hunger and provide refreshment all in one shot.  With gelato cups in hand we headed back south through the beach party once more. 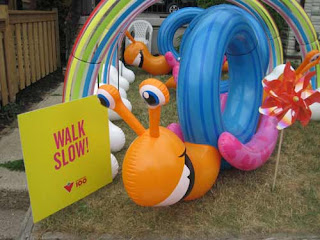 A sign beside a giant snail told us to walk slow.  Not a problem now as we worked on eating spoonfulls of our gelato.  We were wondering how these floaties stayed upright and if you just kind of hung through the snail shell.  Then we checked the Canadian Tire website and realized these are actually sprinkler snails.  You hook it up to your hose and jump through the hoop to beat the summer heat. 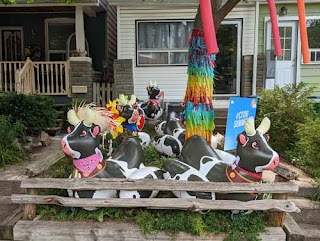 There was one yard where a group of inflatable cows had been properly fenced in.  Much safer than the flamingoes, unicorns and dinosaurs allowed to just roam free in other front yards. 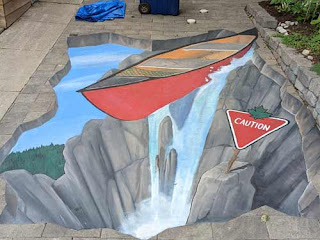 One driveway had a different approach.  Someone has drawn a 3D chalk drawing of a canoe headed over a tall waterfall.  These types of drawings mess with your perspective and trick your mind.  We are not sure if the chalk was donated by Canadian Tire. 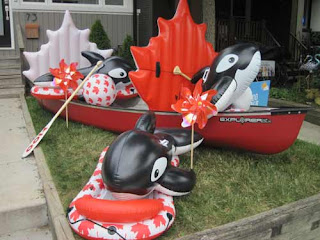 There was a yard which had killer whales inside canoes and on a floatation device.  We are not sure why these intelligent creatures would need this mode of transport when they are such excellent swimmers.  Most likely they had just recently displaced the human occupants. 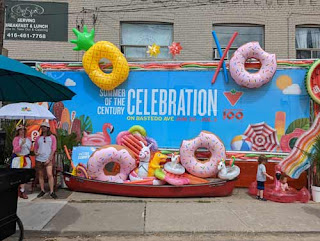 Canadian Tire has called this their Summer Of The Century Celebration.  We hope they have more events like this across Canada so everyone gets a chance to help them ring in their one hundreth year.
Map of Our World