A convenience store changed the outside signage in order to be used as part of a Canadian television show.  That show is Kim's Convenience and it first aired in 2016.  The show is now entering its fifth season and follows the lives of Mr. and Mrs. Kim as they try to run both the store and their family. 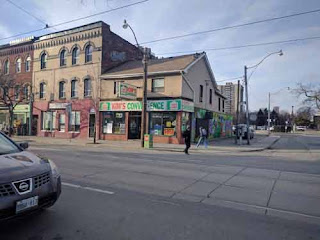 The real Kim's Convenience used to be known as Mimi Variety.  It is used for some external shots for the show even though most of the taping takes place in a replica store built inside a studio.  When we visited the real life location on Queen Street East,  it looked just like any other variety store in Toronto. 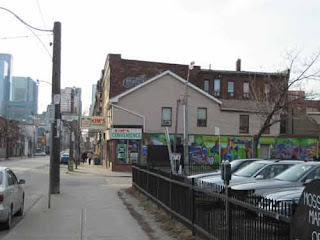 The Kim's have two children, Janet & Jung.  Jung worked at HandyCar Rental.  In one episode Mr. Kim has a life size cardboard cutout of his son advertising the car rental business.  He puts it outside the front door and two neighbourhood kids steal it.  Mr Kim chases them out onto Seaton Street (above) to rescue his son's likeness. 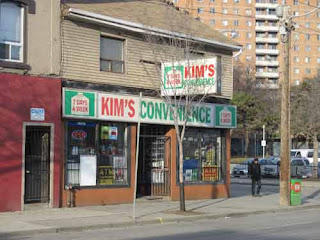 If you find yourself in downtown Toronto you can pay a visit to the store.  Just don't expect to find Umma and Appa inside.
Map of Our World