Courtship Display of the American Woodcock 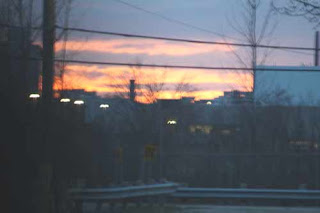 Spring is in the air.  As the sun is setting, the courtship dance of the American woodcock is about to begin.  We joined an enthusiastic group of birders on Toronto's Leslie Spit to see this strange little bird in action. 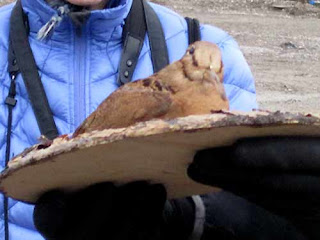 The American woodcock is a weird looking creature that has a round body, short legs, and a long bill.  Woodcocks also have their eyes up high on the sides of their head.  This lets them see 360 degrees.  They use their long bills to pull worms from the soil.  They can actually open and close just the tip of their beak to grab a worm underground as if using a small set of tweezers.  In Ontario, breeding woodcocks arrive in mid-April and courtships can last until the end of May. 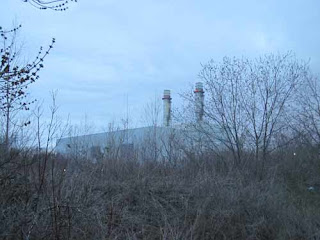 Our group had come to the Spit just before sunset specifically to view the courtship display.  After some discussion from our group leader explaining what we would be seeing, we drove to a bend in Unwin Avenue and pulled over to the edge of the road.  Woodcocks like to breed in pastures, small forest openings or along a roadside.  A male will mate with as many females as it can and has no involvement in the nesting or caring for the chicks.  It is however, up to the females to decide if they are impressed with a male woodcock's performance and agree to mate.

It wasn't long after we parked that the woodcocks began to perform.  There were about three males competing in the area surrounding us.  Tonight they would have to attract a female by making their presence known over the occasional traffic noise and a group of about 15 noisy humans.  You can hear the sounds the woodcocks make if you listen carefully to the video below.


First the woodcock makes what is called a "Peent" sound.  It will do this several times as it turns in place.  Next it will suddenly fly up into the air and do several large circular passes.  Its primary wing feathers create a twittering sound as the wings flap through the air.  After making the larger circles it heads back down to the ground much like a stunt plane at an air show.  It returns in small tight spirals to land almost exactly where it started from.  If no female approaches then it starts the whole process over again.  A male woodcock will do this courtship display every night during the breeding season. 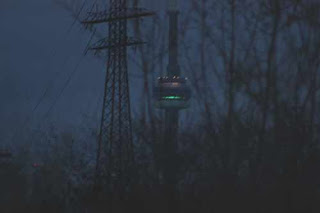 As darkness took over, the performances continued.  We decided that standing on a poorly lit street staring up at the sky while traffic came around a sharp bend in the road behind us was not where we wanted to be.  We wished the woodcocks the best of luck and headed home.  Once again, the beauty and complexity of nature had amazed us.
Map of Our World 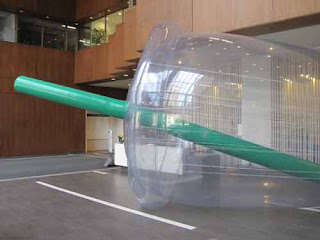 Toronto has a big plastic problem.  Actually, the whole world does.  Right now on St. Clair West there are larger than life plastic replicas of water bottles and disposable cups.  These almost 30 foot tall replicas have been touring the world to make people think before they use single-use plastics. 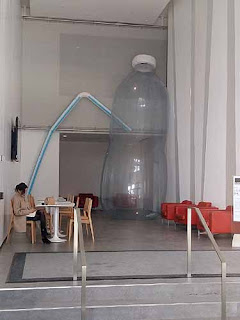 Natural Plasticity's Bottle Project has placed a giant water bottle and straw at 2 St Clair West and a giant cup with a green straw at 55 St. Clair West.  The green straw and cup look like they would hold a summer Starbuck's drink. 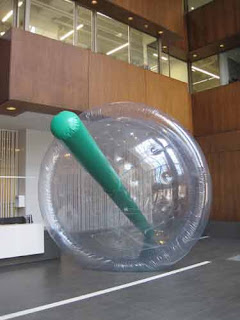 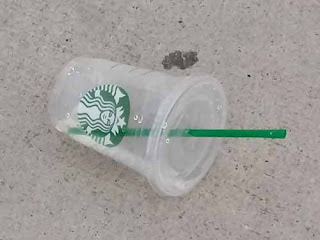 We were already aware of how much plastic pollution is created in our city every day.  You don't have to go far to find discarded garbage in the streets.  There is still hope.  A lot of places in the city are using paper straws which is great.  We also bring our own reusable cups for coffee and thermoses for water when we are out and about.  Brita filtered water for when we are at home. 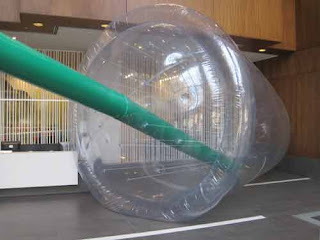 The Bottle Project will be on display until May 1st.  Take a look at the big inflatable plastic and then see how you can reduce the amount of waste that you create.  Think before you drink. 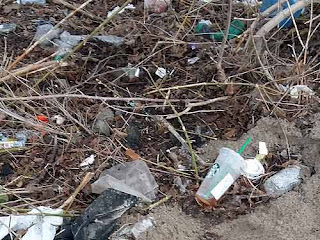 This location is near St. Clair subway. Visit other Toronto TTC stations. 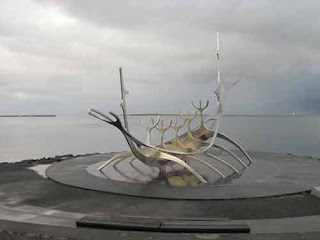 A curved steel boat points out to the water in Reykjavik's harbour.  It is a beautiful piece of art that reflects the light from the sun.  It is known as Solfar, or the Sun Voyager. 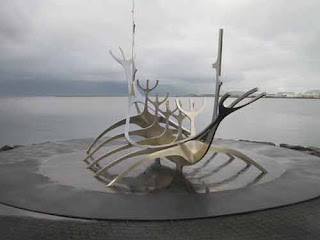 The Sun Voyager was the winning artwork in a competition to celebrate Rekjavik's 200th anniversary.  The sculpture was created by Icelander Jon Gunnar Arnason.  Sadly, Gunnar died of leukemia before the sculpture was placed at the water's edge. 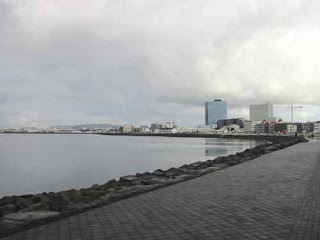 There is a walking path that follows the water around Reykjavik.  There is lots of room to add more sculptures in the future.  Sun Voyager was the main attraction when we visited. 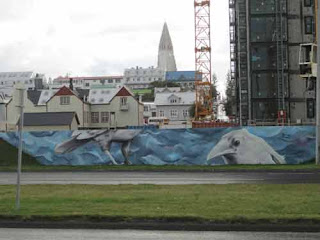 Behind Sun Voyager stood some temporary artwork of a raven.  Further in the distance beyond that stands Hallgrimskirkja.  Hallgrimskirkja is a church which took 41 years to build.  It was finally consecrated in 1986 which is the same year that Sun Voyager won the art competition. 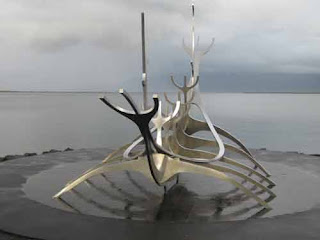 Sun Voyager looks out across the water at Mount Esja.  The steel looks like people rowing with their oars curved down into the water, striving forward towards new adventures.
Map of Our World