Snowy Day At The Leslie Spit 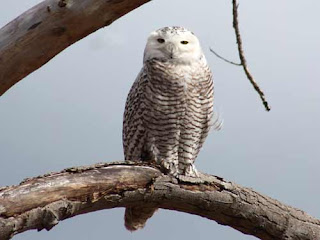 Snowy Owls are large white owls that spend most of their lives up in the Arctic.  They are usually found in Alaska and the territories of Canada.  We traveled to Churchill, Manitoba which is almost as far north as Nunavut and hoped that we might see one there.  We were not so lucky.  They breed even further north still, even as far as the top of Greenland.  In the winter they do come south and this is when you might see them in southern Ontario.  We had heard that some owls were out on the Leslie Spit in Tommy Thompson Park so we went to try and spot one. 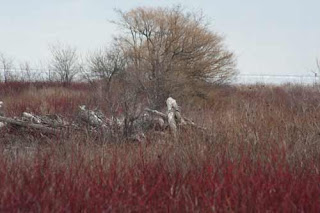 It gets very cold out on the spit which juts out into Lake Ontario so most people don't get too far in the winter.  Snowy owls like the terrain out there as it reminds them of the Arctic tundra they usually call home.  Since snowy owls are almost completely white it is very hard to spot them in the snow.  It is still a difficult task even when the snow has gone.  This photo could have contained an owl but it is just a tree stump. 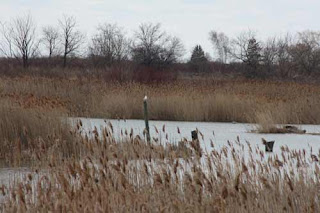 Owls do like to perch on something where they can survey their territory.  In the photo above a seagull is doing the exact same thing an owl might do.  Sorry seagulls, but we already see you everywhere we go by the lake. 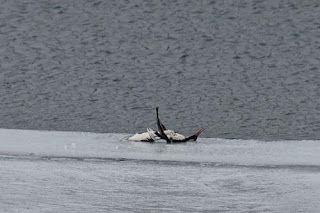 On our first very cold outing we didn't see any owls.  We did see a poor duck who had possibly fallen prey to an owl, or one of the other raptors like a hawk or falcon that frequent the spit. 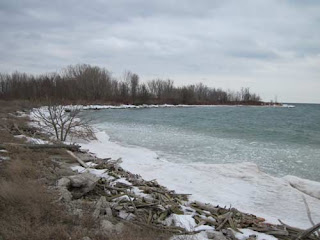 On our second attempt we came across a photographer who had seen an owl up near the end of the spit.  We decided it was worth braving the cold to catch a glimpse of these beautiful birds.  It takes up to an hour to walk to the end of the spit and then the same time to get back again.  We made it all the way to the end but we didn't see any owls.  We suspect that the owls saw us. 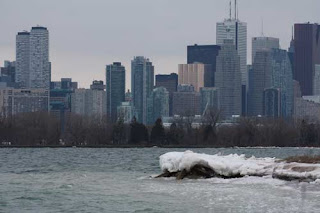 While we didn't get to see owls we did get a different view of Toronto.  At this point we were further into Lake Ontario than the Toronto Islands.   In this photo above you can see the Toronto skyline behind the Island trees. 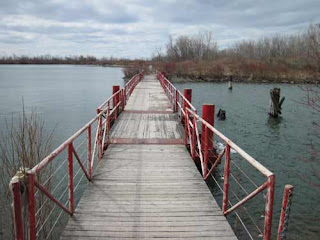 The third time is the charm.  Once again we saw a photographer with a large, zoom camera.  We asked if they had seen anything exciting.  "There was a snowy owl" they said.   They kindly told us that they had seen it just beyond the floating bridge.  The floating bridge is usually a good spot to see swans, geese and ducks. 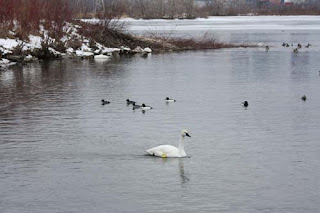 Sorry swans, geese and ducks but today it is all about the owls. 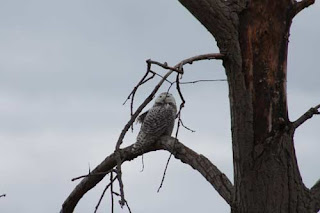 Luck was with us as not too far past the bridge on a long, curved branch sat a female snowy owl.  Adult females have the dark barred pattern, while the adult males are almost completely white. 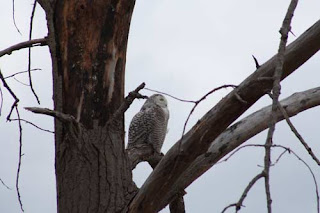 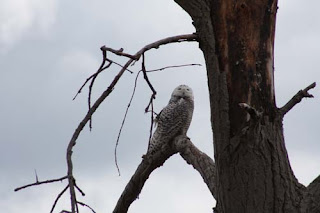 We spent a good deal of time watching the owl watching out across the spit.  Unfortunately, we are not designed to sit happily in the cold winds that blow across the lake and decided we must head back. 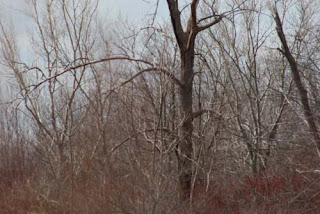 We took one more look back at the owl.  You might be able to spot it in the two curved branches on the left of the tree above. 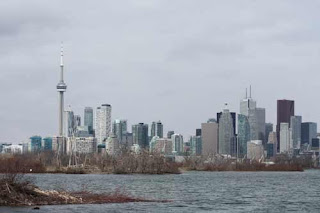 We were headed back to the warmth of the city.  Soon spring will be here and the owls will leave and head back to the cold of the Arctic.  Thanks for spending some time down here with us. 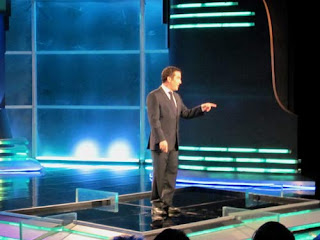 Rick Mercer first appeared on television in the satirical news show, This Hour Has 22 Minutes.  After leaving 22 Minutes he went on to star in Rick Mercer's Monday Report which eventually was renamed The Rick Mercer Report.  After about 15 years, Rick Mercer has decided to retire the show.   We were lucky enough to see a taping at CBC Studios in Toronto.  After Rick welcomes you to the "Mercer Report" the camera always does a quick awkward pan from one side of a pillar to the other.  We were sitting in the seats just below where the camera ends up after it pans.
As part of the show Rick travels somewhere in Canada to attend an event.  The show we watched took Rick behind the scenes on the set of Murdoch Mysteries and to the Royal Agricultural Winter Fair.  He didn't have to go very far as both of these events also take place in Toronto, Ontario.  We have also been lucky enough to visit the fair and the set of Murdoch Mysteries.  We can't quite compete with Rick who has also been to every province and territory in Canada to film his show.
Rick's show is also known for its commercial parodies and his rant.  Rick's rant is where he discusses a topic he feels strongly about usually while walking through a graffitti covered alley.  It is also known for sticking to a very rigid script between segments.  Rick basically says the same things each week such as "All that and so much more, but first please take a look at this", "And now it's time for The Front Page" or "I'm Rick Mercer, see you next Tuesday".
We will miss The Rick Mercer Report as it was as much a Canadian travel show as it was a comedy.  Thanks Rick! 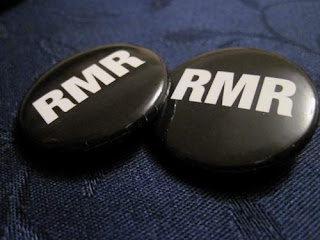 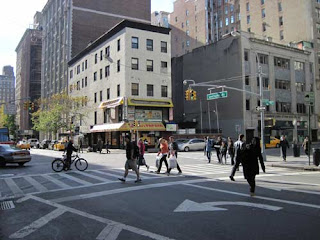 One of the most memorable scenes in Meet Joe Black is how Joe Black actually became Joe Black.  Susan (Claire Forlani) meets a young man (Brad Pitt) at a coffee shop and they are both smitten.  As they walk away each of them turns several times to say something but they never do. 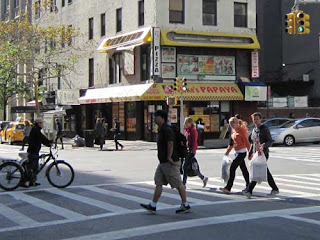 Brad stops once more in the middle of a busy intersection.  This is East 23rd Street in Manhattan.  He would be crossing in the far right crosswalk of the photo above. A car almost hits his bag and he steps back.  He bounces off a van and then again over a yellow New York City cab.   You will have to watch the whole movie to see if he survived. 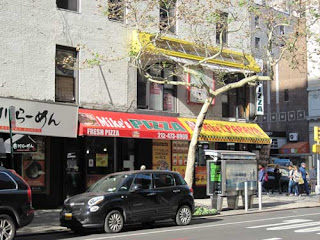 At the time of filming this scene, there was a pizza place we think was called the Gramercy Eatery.  For filming purposes it looks like they put up a brown banner to cover over the restaurant name. When we arrived to take our photos it was now Mike's PAPAYA and there was a slightly different green pizza sign mounted on the building.  This is now another lost filming location as the whole building has been torn down and replaced. 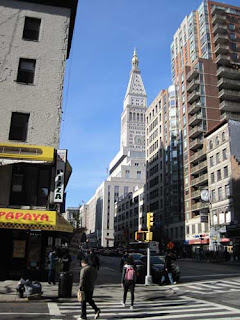 The middle of the road where all the action took place is still there.  This is where Brad Pitt, a dummy and some CGI all worked to bring this scene together.  The building you can see down the street is the Metropolitan Life Tower located beside Madison Park. While you are visiting New York be very careful and never stop in the middle of a busy street.  Even if you thought you saw Brad Pitt, wait until you are safely on the curb before looking back.