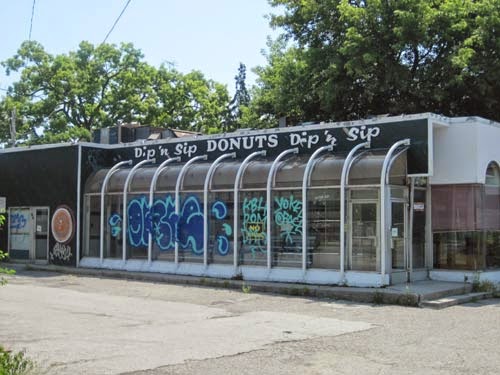 Kick-Ass is a movie based on a comic book.  It is a story about an average teenager (Aaron Taylor-Johnson) who decides to take matters into his own hands and becomes an unlikely superhero.  He dresses up in a green body suit and sets out to stop crime.  His first attempt does not go very well, but his second attempt takes place outside of Dip 'n Sip Donuts.  While trying to rescue a cat, he inadvertently gets caught up in someone else's fight.  He ends up defeating three thugs who were ganging up on one guy.  The whole thing is caught on video and soon becomes one of the most watched clips on the internet.  It rises to fame even faster than any of our Life Is Better on Vacation videos.  All this attention soon gets him involved with the likes of Big Daddy (Nicolas Cage), Hit Girl (Chloe Grace Moretz) and Red Mist.
A large part of the movie was filmed in both Toronto and Hamilton, Ontario.  When we finally got around to visiting this location it was already fenced up, covered in graffiti, and ready to be demolished to make room for condos.  By the time you are reading this post we expect it will already be gone.  You would think that there must be some group that would stand up and get this location designated a historical landmark.  "Hey man!  You can't build here. This was where Kick-Ass first kicked ass!" 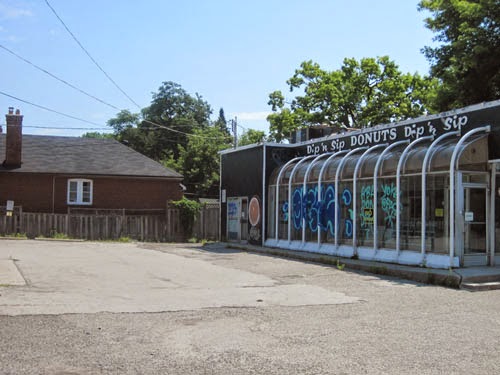