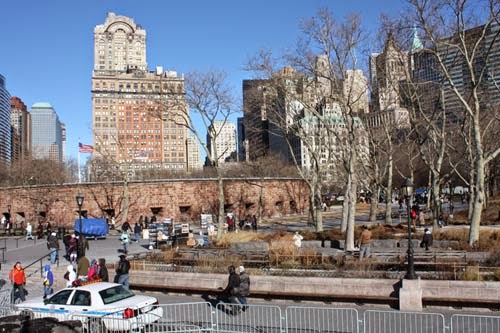 As we traveled on the subway towards South Ferry station there was an announcement that you needed to be in the first five cars if you wished to exit the train at that stop.  Being tourists, we were not sure how many cars make up a typical New York subway.  Is there ten cars? Is there more than that? How far back in the train were we anyway? At the next stop we ran forward from the car that we were in.  The train stayed at the station so we ran forward some more.  We were not alone as other passengers revealed themselves as tourists and joined the rush.  Eventually there was another announcement along the lines of  "You have moved forward far enough you only need to be in the first five cars".   We assumed this announcement may have been for us so we took a chance and stayed where we were.  South Ferry station is an older station with a platform that can only fit half of the train.  Luckily when the doors opened we had a platform to exit onto.
We arrived in Battery Park and the lines of people circled through the grounds.   There was one line to get your Statue of Liberty tickets and then you moved on to the next line, where you waited to board a boat that would finally take you to Liberty Island.  Neither of the lines looked very promising.  We waited for some time and then noticed that people were arriving and heading straight to another line to wait for the boats.  We inquired and were told that they had timed tickets which they purchased on the internet.  This seemed like the better idea as it was a rather cold December day and we still had lots of New York to see.  We took one last look out towards Lady Liberty and vowed to return next year. 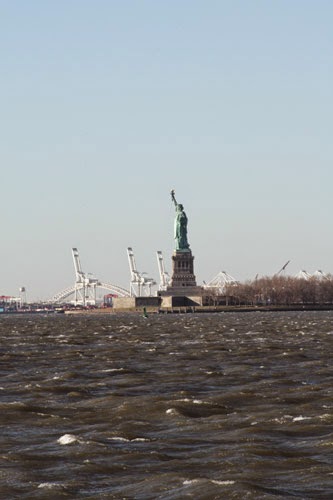 Later that night we went online and purchased our timed tickets for two days later.  On New Year's day we returned to try again.  We sat right up in the front car of the train, but this time we were on an R train going to Whitehall Station so it was not required.  Whitehall and South Ferry stations end up being right next to each other so either one will get you close to Battery Park.  New York might be the city that never sleeps, but on New Year's day we think they make an exception.  The lines were considerably shorter and the weather was also considerably colder.  Despite the poorer turnout, our timed tickets still saved us from standing in line in the cold. 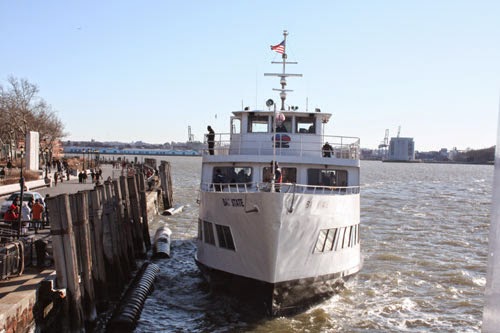 Soon we were on our way sailing towards Liberty Island which is part of the National Park Service.  The Statue of Liberty was a gift from France and it was shipped in pieces to the USA.  It's official title is "Liberty Enlightening the World" and was designed by Frederic Auguste Bartholdi.  It sits on an American pedestal created by Richard Morris Hunt and was dedicated back in 1886.  Once we were on the island we made our way from the dock and had a view of the back of the statue.  This view is limited only to those who visit the island, or someone in New Jersey. 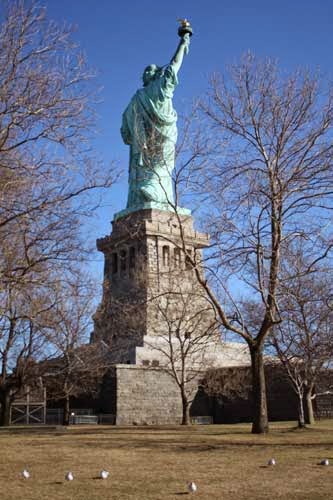 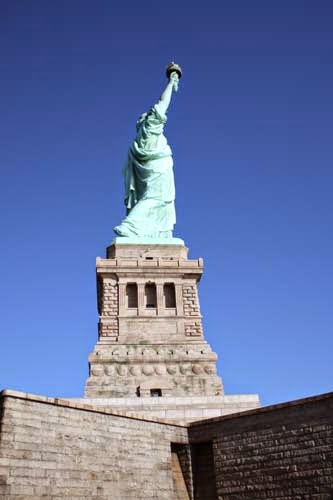 We made our way around the right side of the statue and we could tell that Lady Liberty is actually stepping forward.  You can see the heel of her right foot off the ground.  From the front or the left sides of the statue she always appears to be standing still.  Finally, we were able to stand beneath her and look up at her face from the front.  The statue itself stands just over 150 feet tall.  If you include the pedestal it is just over 300 feet.  She has seven rays on her crown to symbolize the seven seas and continents.  To go inside the crown or pedestal you must book online well in advance to get special tickets.  The tablet she holds reads July 4th 1776 in roman numerals.  This date is Independence Day when the United States of America declared it was independent from Britain. 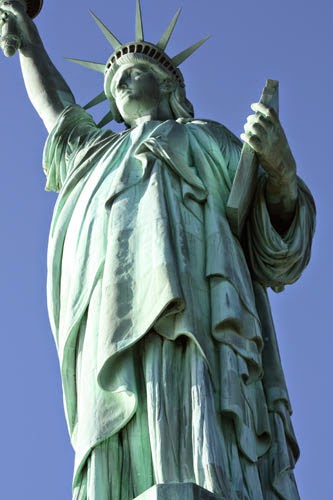 The Statue of Liberty shares Liberty Island with not much else besides some trees and The Crown Cafe.  It was from this cafe that we purchased a spring water bottle which contained many of the facts included in this blog.  Once you have visited Liberty Island you must then board another boat to take you either to Ellis Island or back to Battery Park in Manhattan.  Be sure to check the ferry times and line-ups to minimize your wait times.  Any trip to the Statue of Liberty includes the trip to Ellis Island so that is where we were headed next. 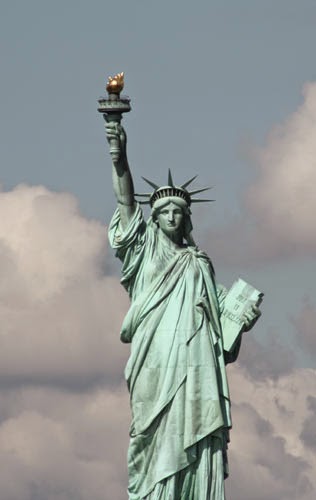