Statue of Liberty (In The Movies) 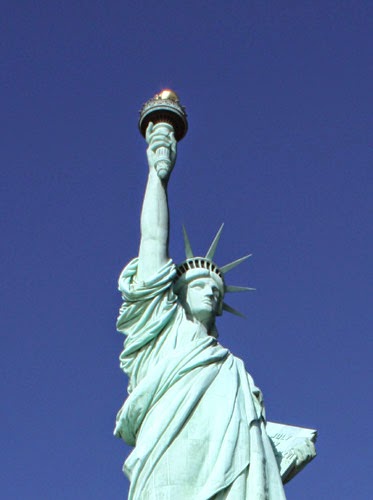 The Statue of Liberty has been seen in numerous movies.  Nothing does a better job of letting you know that you are on American soil than a few shots of Lady Liberty standing watch over New York.  Most movies don't actually make the trip to Liberty Island and instead use special effects.  Here are a few of the movies we have seen that feature the statue, courtesy of some movie magic.

National Lampoon's European Vacation
When we first started thinking about movies that featured the Statue of Liberty, we recalled a movie in which a plane crashes into her torch and causes it to swing in her hand.  We figured it out.  As the Griswold family returns from Europe, Clark (Chevy Chase) accidentally enters the cockpit instead of the washroom.  He then bumps into the pilot and causes the plane to dive.  Oops!

Planet of the Apes
George Taylor finally escapes those "damn, dirty apes".  He sees the Statue of Liberty sticking out of the sand on a beach.  It is then that he realizes he is still on planet earth.

Spaceballs
Mega Maid is a vacuuming spaceship that bears a striking resemblance to the Statue of Liberty.  This resemblance is further emphasized by a Planet of the Apes parody.  When she crashes into a beach the whole thing is witnessed by a couple of apes on horseback.  "There goes the planet." 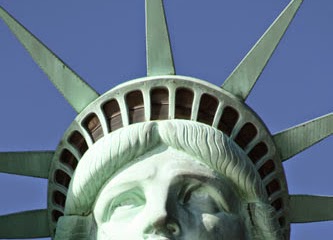 Ghostbusters II
If you visit the Statue of Liberty and wish to go inside the pedestal or up into the crown, you must book your tickets well in advance.  Ray, Egon, Peter and Winston manage to not only make a last minute trip up to the crown, but do so in the middle of the night.  Using some of their slime they bring the statue to life and she wades across the Hudson River and into the streets of Manhattan.

Superman IV
Superman IV isn't the best Superman movie (actually it's the fourth best), but it does feature the Statue of Liberty.  The villain, Nuclear Man, takes the statue and flies her through the streets of Manhattan and then hurls her towards the ground.  Superman swoops in and saves the day and she is safely returned to her pedestal.  For his efforts, Superman gets to leave Liberty Island courtesy of the business end of a boot.

Judge Dredd
I am the law!  Sylvester Stalone (Judge Dredd) spends a little time hanging from a hole in the side of the statue's head.  In this futuristic tale the Statue of Liberty has been moved to the middle of a Mega City and hides a secret laboratory.

X-Men
The X-Men have a battle that starts in the pedestal of the Statue of Liberty.  Magneto is going to create radiation in the statue's torch which will mutate all the world leaders meeting on nearby Ellis Island.  Besides making a mess of the museum in the pedestal, the X-Men damage the statue's head and Wolverine's claws leave a few permanent scratches.