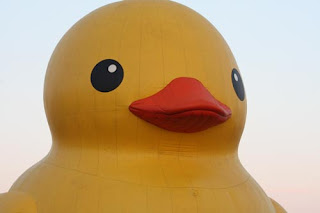 When we visited HTO Park down on the waterfront everyone was excited about the fireworks displays that were set to take place later that evening. As we approached the park we realized that a giant visitor was also in Toronto to help celebrate Canada's 150th birthday. A 6 storey tall, 30,000 pound visitor. 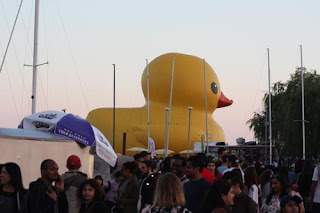 We worked our way through the crowds to get an up close view of the giant rubber duck that was floating in Lake Ontario. He was very cute. He was very yellow and chubby too. 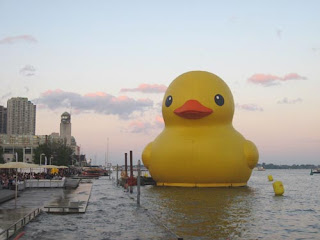 We took various photos of the duck. As we were walking around to see if we could get a picture from the next pier we spotted a line-up for a water taxi. We thought "Why Not?"  We still had a couple of hours before fireworks lit up the CN Tower. The taxi was taking people out for about a 20 minute ride around Toronto Islands.  The taxi could hold up to 12 people. The 10 people in line plus the 2 of us filled up the next boat. 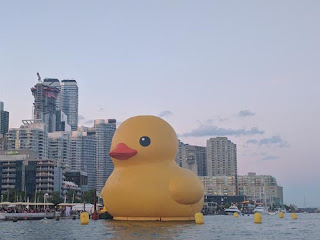 A new view of the duck awaited us as our taxi worked its way out of the harbour. It was a little busy out there with Canada celebrating its 150th and no less than 5 fireworks displays visible from the water. The duck was getting lots of attention too. 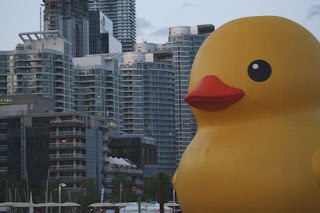 We circled through the islands which unfortunately were closed due to the recent flooding. We got caught behind some large boats that were heading out to get a good spot to see the fireworks.


As the sun was setting we headed back towards our giant, yellow friend. The familiar CN Tower and Rogers Centre were there as well. The duck had a light inside for nighttime viewing. 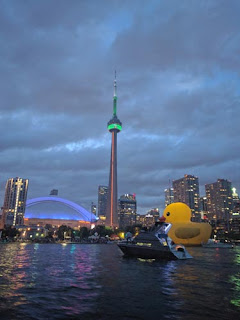 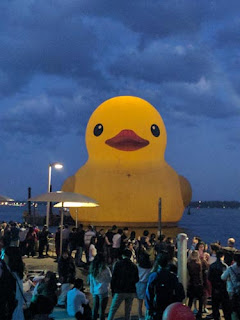 We took one last look at the duck as he smiled back at us. We had to head out and find a good spot for viewing the CN Tower fireworks display. The duck will also be visiting a few other Ontario cities in July such as Owen Sound and Midland. Maybe we will meet again.