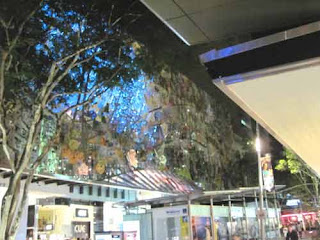 We found ourselves walking around Brisbane in the evening while we were in Australia.  The first night we were looking for somewhere good to eat.  We headed south and ended up at the Queen Street Mall.  It is a pedestrian only road with many stores and restaurants.  It also has a pixel light display above one portion of the street.  We were looking for somewhere nice to sit and relax and enjoy a meal after a long day. 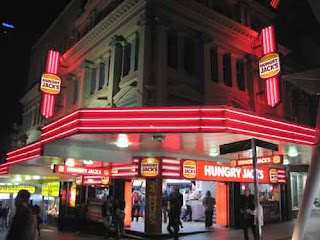 One restaurant caught our eye.  It had a familiar logo.  This is Hungry Jack's and is the Australian franchise of Burger King.  Another hamburger chain was already operating as Burger King when the American company decided to expand down under so a different name was chosen.  We didn't really feel like a Whopper so we continued our search. 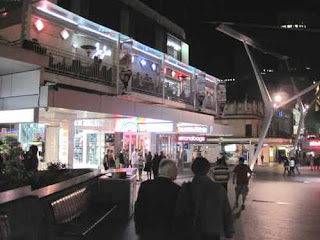 We turned around and there were people enjoying dinner on a balcony.  A little rainbow lead the way upstairs.  This is Jo-Jo's and we decided to check it out. 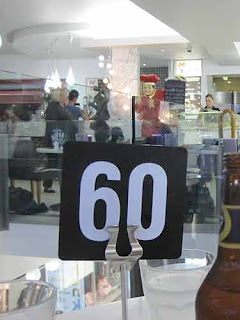 We were given a number card on a stand.  We were told to put it on our table and then we could go to the stations to choose what we wanted to eat.  You had to pay at the stations and then someone would bring your food to you back at your table.  This was the first time we encountered this service, but it was common in many places around Australia.  We enjoyed our dinner and then took a stroll around Brisbane. 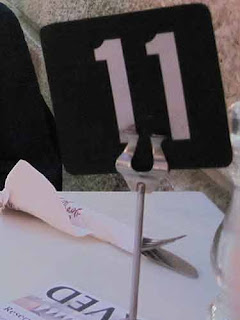 The next night we didn't try too hard to find a new place to eat.  It was back to Jo-Jo's.  This time we ended up on the balcony and held card number 11.  We now knew how the routine worked.  After dinner we went for a little walk again. 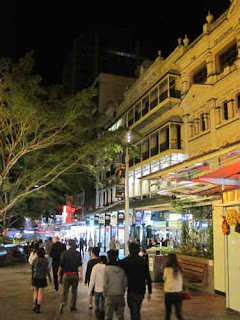 We walked out of the restaurant and noticed a lot of people headed south along Albert Street. We decided to head south as well.  We were curious where everyone was going.  As we walked we noticed more and more people.  Soon we reached the gates of the Brisbane City Botanic Gardens. 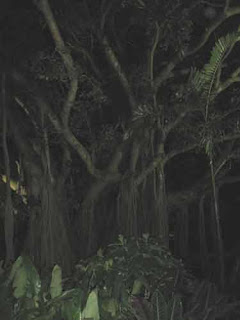 We decided to follow the crowds into the park and see where they would lead us.  It was very dark in the gardens and we could barely see the strange trees around us.  Maybe they were doing fireworks in the river? 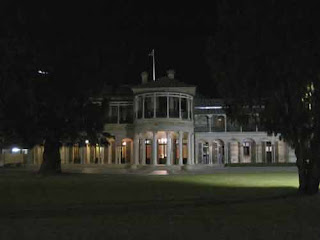 We went deeper into the gardens.  Some people rushed past us.  On the edge of the garden was an old building.  This is Old Government House.  It was built in 1862 and was Queensland's first public building.  We went a little further and could hear music.  Then we were at the gates of the Riverstage.  This was the end of the line for us and we would wonder no more.  The tables selling merchandise told us that British act Florence & the Machine were playing a concert that night.  Mystery solved.  We do enjoy the band's music and would have loved to stay for a show, but we had another busy day planned tomorrow and no tickets.  Instead we fought our way back against the flow of Florence fans and past Jo-Jo's one last time