On The Set of Jeopardy! 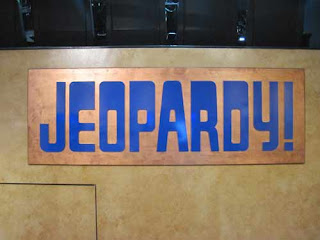 As part of our Sony Pictures Studio tour we were going to visit either the set of Wheel of Fortune or the set of Jeopardy!  The Sony Pictures Studio Tour is a walking tour of the studio grounds.  Today's set visit was Jeopardy!  Contestants are given answers and then must phrase their response in the form of a question.  So if the answer was "A Merv Griffin created game show that has been around since 1964".  The question would be "What is Jeopardy!?" 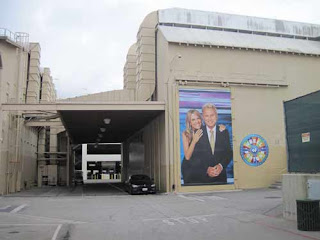 The two game show sound stages are located right beside each other on the lot so we walked past the Wheel of Fortune stage to get to Stage 10 for Jeopardy! 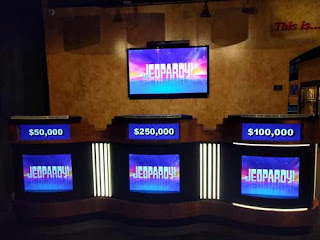 Once inside we were face to face with the Jeopardy! contestants row.  Everyone in our group took turns pretending that they had what it takes to answer Jeopardy! questions. 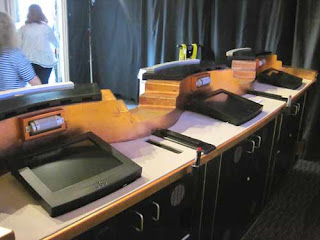 As we stepped behind the panel we could see the tablets they use to write their final answers.   There are also lights at each position to let the contestants know who buzzed in first. 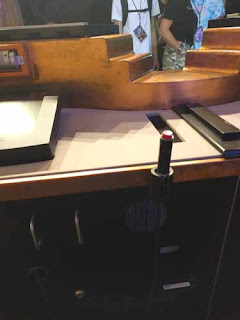 The photo above is of one of the buzzers in its holder. 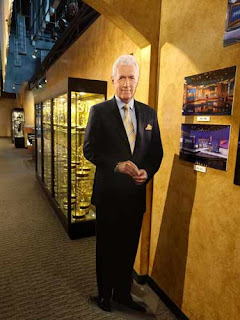 Alex Trebek has been the host of Jeopardy! since 1984.  He has had some health issues recently but is fighting to keep going and he has the support of a legion of fans. 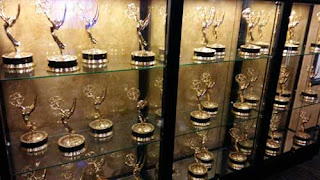 Jeopardy! has won 33 Daytime Emmys over the years.  There was a cabinet displaying the hardware. 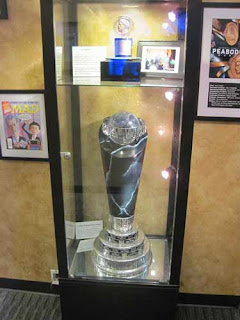 There were other awards on display such as the Jeopardy! college championship trophy. 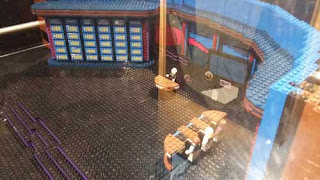 In 1932 this Danish company was formed making interlocking bricks for children.  What is Lego?  There was a Jeopardy! set made out of Lego. 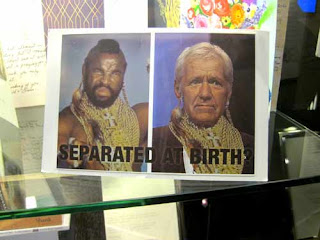 There was a photo of two Mr. Ts.  There was the Mr. T we know from The A-Team and the other Mr. T as in Trebek.  Both men were sporting lots of gold chains. 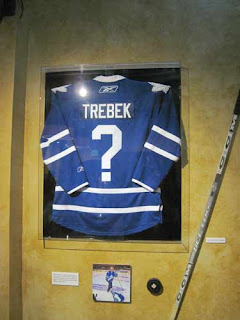 There was a Toronto Maple Leaf Trebek jersey on display.  Alex is an avid sports fan and was born in Canada.  He wore this jersey during a video clue shoot. 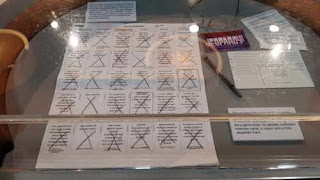 If you have ever watched the show and wondered what Alex is writing down during the show, we now know.  He has a chart of the board and he crosses out the answer once a contestant has given him the correct question. 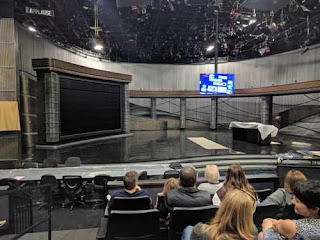 Finally we had a chance to sit in the audience in front of the set.  The front row is for a group of judges who have to decide if a question was given correctly or if something needs changing during the show.  The big game board was up on the stage, but the set was dark as there was no taping that day.  The answer is "We did!"  The question is "Who had a good time going behind the scenes on the set of Jeopardy!?"