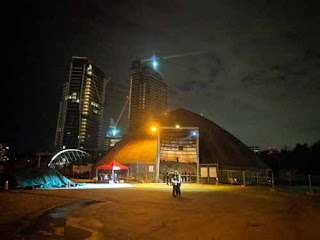 Salt both preserves and corrodes at the same time.  The city puts salt on the roads to melt ice, but it also does damage to boots and the roads themselves.  You are more likely to drown in salt water because the salt causes dehydration.  Nuit Blanche comes to Toronto once a year and one of the projects for 2019 was called Detritus by artist Jonathan Schipper.  Detritus means small particles broken away from a mass, much like the salt filling a City of Toronto storage dome. 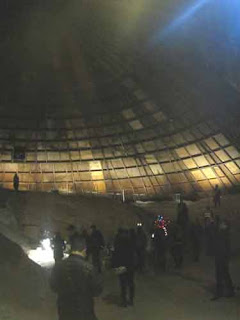 One of the great things about Nuit Blanche is that you often get to explore places you would never be allowed on other evenings.  Toronto stores its salt for winter inside gigantic domes.  For Detritus we were allowed to venture in and it felt like we had entered another world. 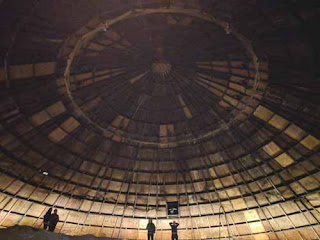 Looking up at the dome in the middle of the night, it felt like a spacecraft was coming down on top of us. 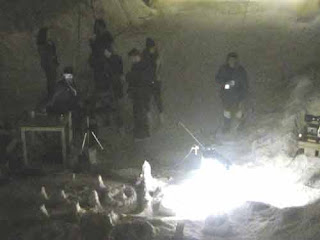 The artist had a laptop computer set up at a little table and was using a 3D program to control equipment that was slowly building things out of layers of salt.  The creations would start to deteriorate as the night wore on. 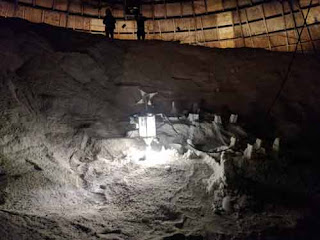 Most of the salty creations looked like a castle was slowly being built on a salt covered hillside. 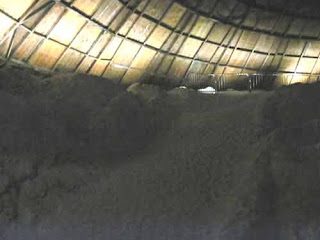 A pathway leading upwards had been packed down into the huge mound of salt.  We double checked what shoes we were wearing and headed up.  We half expected we might slip away into the salt as if we had stepped into quicksand. 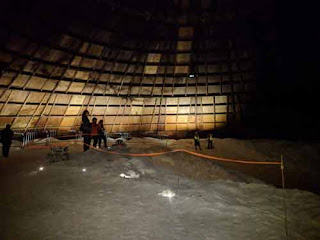 Some other people had already gone before us so we ventured to the top. 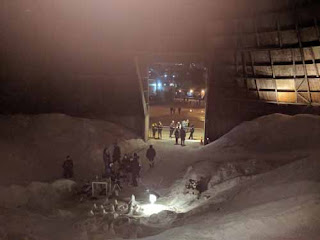 We made it up to the top and realized that we could start to taste the salt in the air.  We looked down as the artist continued to work below us.  We wondered how he could spend 12 hours inside this dome.  Some caution tape kept us back from the edge where we might cause a salty landslide that would destroy his creations.  It was time for us to move on to the next Nuit Blanche exhibit.  Goodbye salt! See you this winter on an icy road somewhere in the city.
Map of Our World