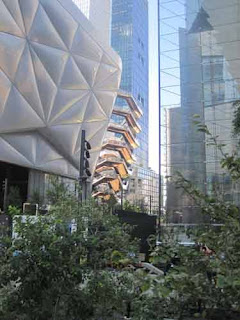 The High Line in New York is a repurposed elevated railway that passes through the west side of Manhattan.  At the northern end of the High Line is Hudson Yards.  Hudson Yards has grown to include a large shopping center, apartments and a concert event venue.  In the middle of it all stands the Vessel. 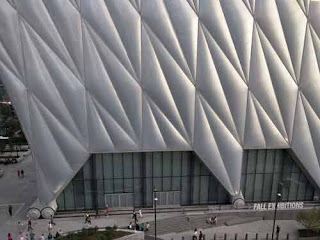 Before we reached the Vessel we had to walk past The Shed.  The Shed is a huge metallic looking building on wheels so that the amount of covered space can increase in size.  When we walked by, someone was rehearsing a song which to us sounded like "Bye, Bye Macaron" repeated over and over.  We found out later that the event was for World Central Kitchen so maybe those were indeed the lyrics. 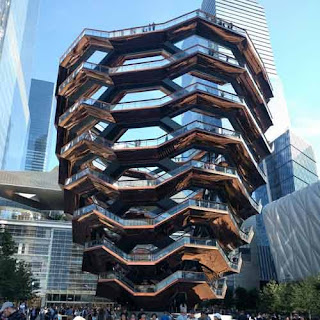 The Vessel really is something to see.  It is a hollow open structure that stands almost 16 stories tall.  It is made up of a series of steps and landings and one elevator.  There are 154 staircases and 80 landings inside the structure.  It looks like a giant vase sitting in the middle of the square. 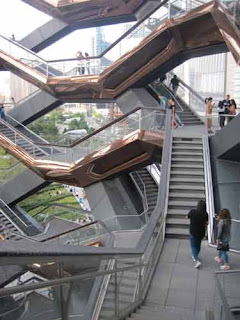 Climbing the Vessel is free but requires a reservation as only a limited number of visitors are allowed inside at any given time.  The first day we arrived and were told to visit one of the kiosks surrounding the structure.  From there you can use a QR code or be sent a text to get a link for reserving a time slot.  Unfortunately, all of the times were later than our other afternoon plans would allow.  The next day we returned and tried again.  We booked a time for later in the afternoon and went off to explore New York. 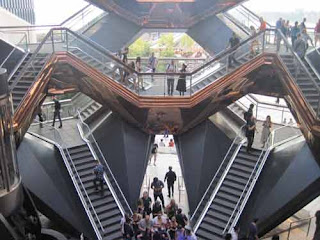 We returned within our designated entry window and were allowed into the Vessel. 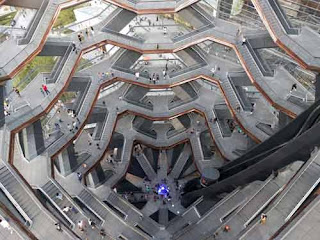 At the bottom of the Vessel was a glowing purple light where people were placing their phones to get a perfectly round image with their faces and the surrounding buildings. 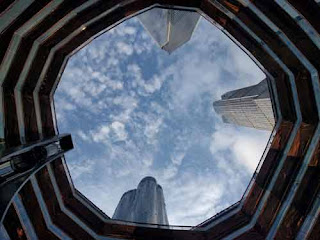 The photo would look something like this photo above except with the view ruined by goofy faces. 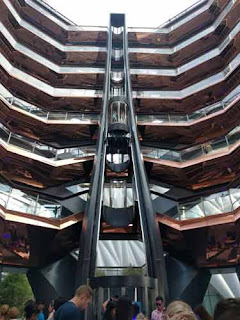 We started to climb the stairs.  There are no seats or benches anywhere so be prepared to climb up and down without a break. There is one elevator if you wish to wait for it. 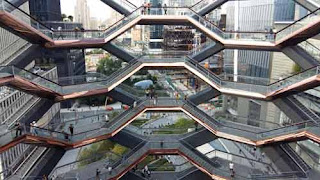 The stairs go up in multiple directions so you kind of move around the sculpture as you climb up.  If you wanted to stay on one level but move to the opposite side you would go up one staircase then across a small platform and then down again.  You would repeat this until you got where you were going. 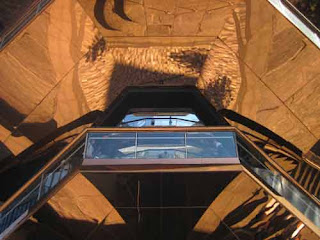 We moved around the structure as we worked our way up to the top.  The staircases full of people made for interesting photos from any angle.  The whole structure had a metallic bronze exterior to it which reflects.  We felt like we were in some futuristic space station.  We expect it may not be too long before someone films a movie inside this structure.  If you can, we recommend you visit The Vessel and take the stairs.