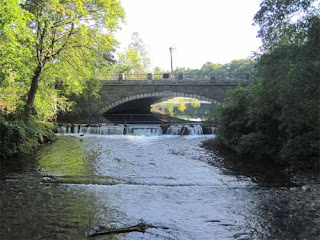 Dufferin Islands is a secluded area tucked away from the roar of Niagara Falls.  It is a series of waterways and islands located south of The Falls as you travel along the Niagara Parkway.  It is a great spot to escape from the flashing lights and crowds of the more touristy areas of Niagara. 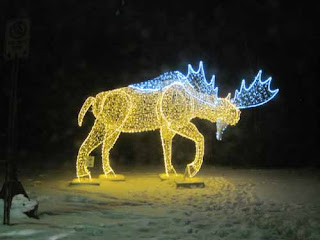 In the winter time,  the Niagara Parkway is filled with magical light displays.  The lights continue into Dufferin Islands and along the road that wraps through the islands.  Dufferin Islands is also the point where you can leave a donation to show your appreciation for all the work that goes into creating this show each year. 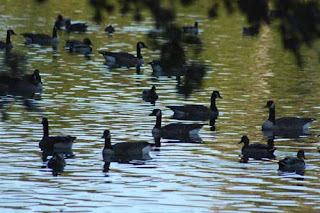 If you are looking to do some bird watching then Dufferin Islands is the place for you.  No matter what the season, the water is teeming with various geese and ducks. 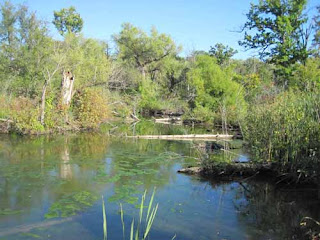 The area is the perfect habitat to sustain a variety of wildlife.  You can take an enjoyable stroll through the island pathways connected by various bridges. 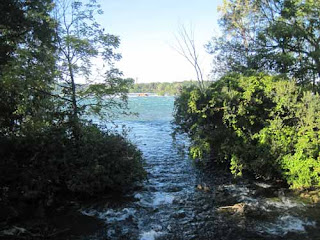 If you follow the water eventually you will find yourself headed towards the Niagara River where the upper rapids rush towards the falls. 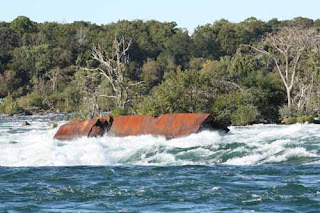 If you look out into the Niagara River, almost directly from Dufferin Islands, you can see what looks like a rusty boat stuck in the rapids.  This is a scow which is used in dredging operations.  Back in 1918 two men were trapped on this scow when it came loose from the tugboat that was pulling it further up river.  A day later they were finally rescued using a canvas sling suspended from pulleys.  The men escaped without harm, but the scow has remained here for over 100 years. 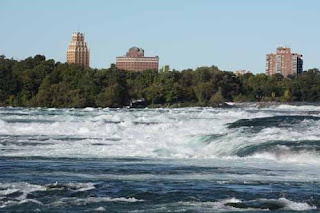 You can see how powerful the water of the Niagara River is even before it reaches the brink of the Horseshoe Falls. 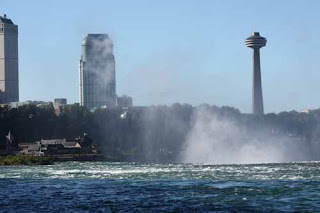 From this angle you can also look past the edge of the Horseshoe Falls and see where the mist rises as the water plummets over the edge.  In the photo above is Table Rock on the far left.  Table Rock is  right at the top edge of the falls and is the best spot to watch the water as it starts its descent.  The Skylon tower can also be seen on the right hand side. Once you have had enough of the rush of the falls you can walk back to Dufferin Islands and try to spot some of the light displays that remain set up year round. 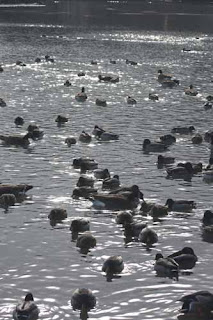 While the islands are normally full of the usual waterfowl, once in a while there are other birds in amongst the Canada geese, mallards and seagulls.  It may just be a challenge to spot them. Visitors come from far and wide to see Niagara Falls and this duck is no exception.  We had heard of a rare visitor to the islands.  It still took us a while to finally find him despite the fact he had been right in front of us the whole time. 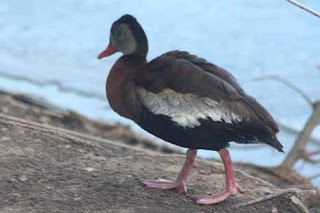 This rare visitor is a black-bellied whistling duck.  They normally live in South and Central America only coming as far north as southern Texas in order to breed.  This duck had travelled even further north to find itself up in southern Ontario, Canada. 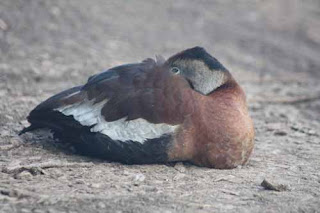 This duck had been reported as visiting the islands in the summer.  When we visited in January the duck was still there despite the weather being about -20 C.  We imagine it was dreaming of warmer climates as it tucked its head beneath its wings.  We also know many human visitors rethink their clothing choices as they visit Niagara Falls during a Canadian winter. 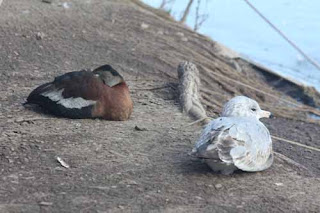 At least as the duck climbed up onto the bank it was not alone.  A seagull walked over to join it.  A bit later a female mallard also came over to be near this special visitor. It reminded us of Niagara Falls and the Dufferin Islands.  A place where people from all over can come together and marvel at the beauty and power of nature. 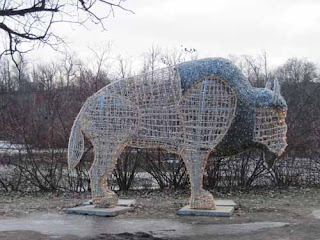