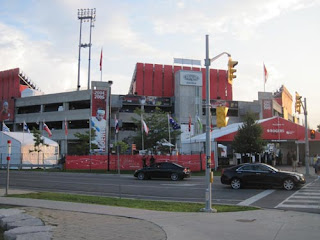 The Canadian Open tennis tournament takes place every year in both Toronto and Montreal.  It has been in place since 1881 and is currently referred to as the Rogers Cup.  Each year the event rotates between the two cities.  So on even numbered years the men will play in Toronto and the women play in Montreal.  The next year the men head to Montreal and the women come to Toronto.  We have been lucky enough to attend the event several times, but we still have never seen the women play. 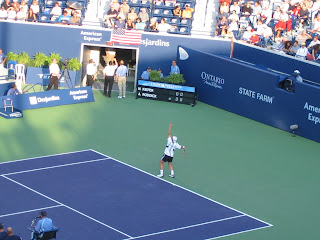 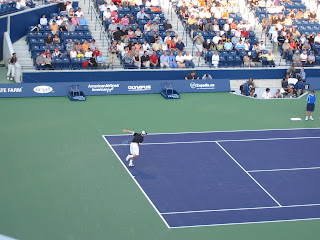 Back in 2004 we saw Andy Roddick defeat Germany’s Nicolas Kiefer. 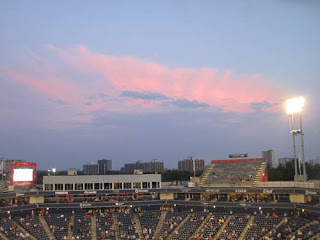 In 2010, after an evening of long rain delays, we saw Canada's Peter Polansky win against Jurgen Melzer.  We also witnessed the doubles match featuring Canadians Vasek Pospisil and rising star Milos Raonic.  They were playing against the number one and number two ranked players at the time. They successfully defeated Rafael Nadal and Novak Djokovic out on the court that night. 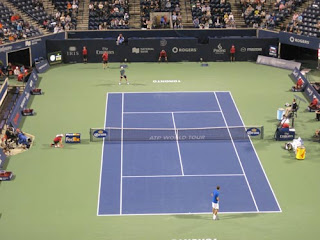 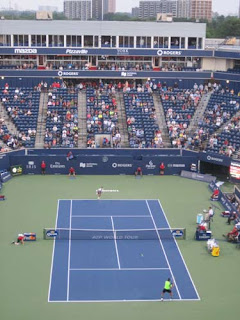 In 2014 we watched matches between Grigor Dimitrov and Kevin Anderson as well as Britain's Andy Murray and  Jo-Wilfried Tsonga.  Tsonga won his match, but he was wearing a very bright shirt which we thought was a little too close to tennis ball colour to be allowed. 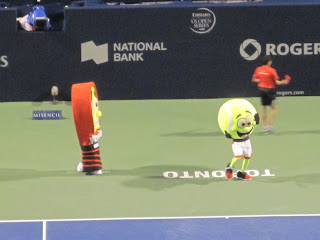 There were two mascots for the games:  The Racquet and The Ball.  They danced around a bit between the matches and then temporarily obstructed the view for some fans during the match. 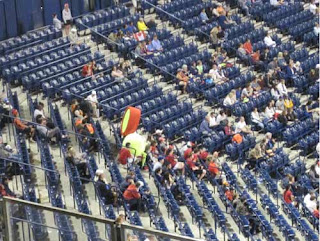 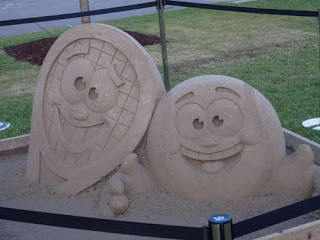 The Rogers Cup event also includes stations with food, contests and giveaways.  There was also plenty of opportunity to show off your tennis skills. 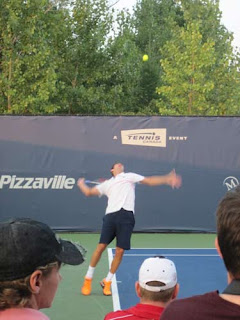 Aside from the main stadium there are tennis courts with smaller viewing areas where players can practice and other qualifying matches are held.  The Rogers Cup is always a fun event where we were lucky enough to see some world class tennis. 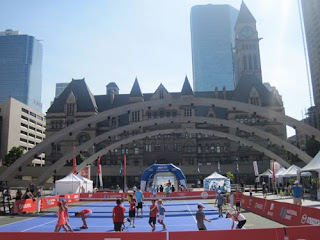 This year Nathan Phillips Square in Toronto had a tennis court set up to promote the tournament where the public could come and play.  There were also some events set up and entertainment like The Fire Guy and his flaming tennis racquet below. 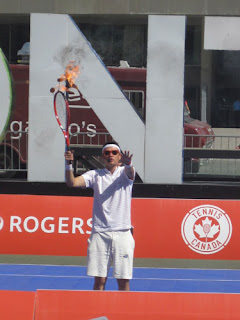 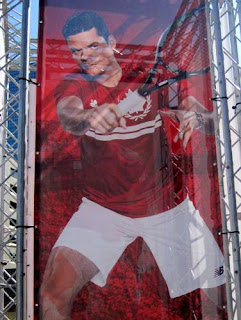 Speaking of smoking serves, Milos Raonic has one of the fastest in tennis today.  At a previous Rogers Cup he hit a serve which was clocked at about 249 kilometres per hour. We were lucky enough to see that serve in action back in 2010.  This year we are hoping that Milos Raonic will play his way to becoming a men's singles champion. 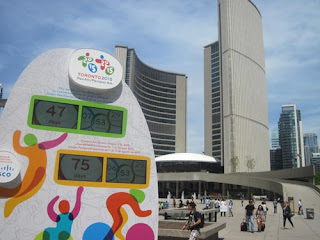 The Pan Am Games are coming to Toronto.  Everywhere you look you see the signs.  Buses and subways are covered over in ads promoting the games.  There is a giant countdown clock sitting in Nathan Phillips Square which is counting down to the very second that the games begin.  Across the street from Nathan Phillips Square, The Sheraton Centre has a huge banner hanging down the side proclaiming "The games are coming". 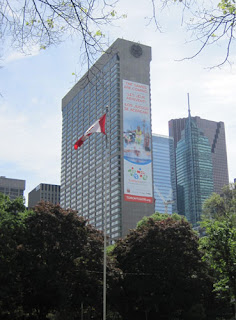 We were even in Niagara Falls, Ontario and noticed this floral display. 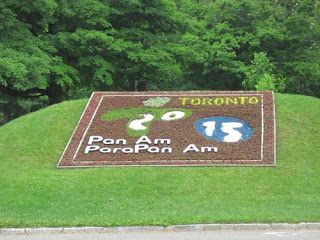 There are also lots of strange signs appearing around the city.  For example, we spotted this building which was labelled UDAC and was flying the Pan Am Games flag out front.  We discovered that UDAC stands for Uniform Distribution and Accreditation Centre and that this is where all of the volunteers go to obtain their uniforms. 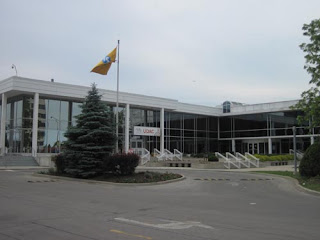 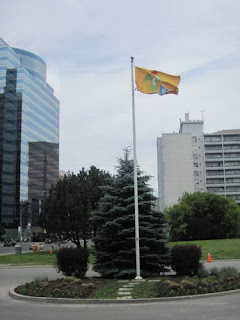 Back in Nathan Phillips Square (or should we say NPS) the area has become a main location for enjoying the games. 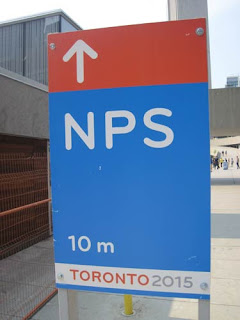 Just outside the square in front of Old City Hall, we spotted PACHI on top of a bus shelter.  PACHI the porcupine is the official mascot of the games.  He has 41 coloured quills on his back and each one represents a participating country.  The games are open to North American, South American, and Caribbean countries. The Pan Am Games are held every four years and are the next biggest summer sporting event behind the Olympics. 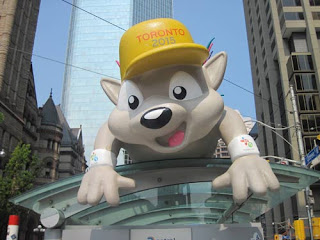 As we entered the square we could see the scaffolding getting ready for Panamania.  Panamania is a series of free concerts being held around Toronto for the duration of the games.  There are also plans to broadcast some of the sporting events live on giant screens. 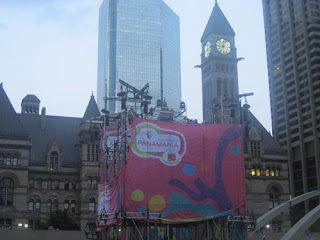 On the west side of the square is a temporary Pan Am Games Superstore where you can get all your souvenirs from the games.  This includes Pan Am T-shirts, hats, buttons, PACHI dolls or merchandise to show your support for a particular country.  We received some free PACHI stickers just for walking inside to take a look. 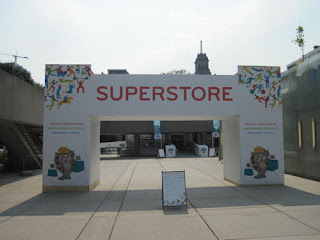 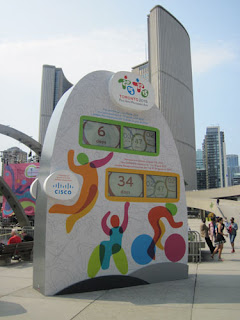 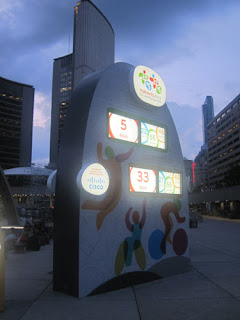