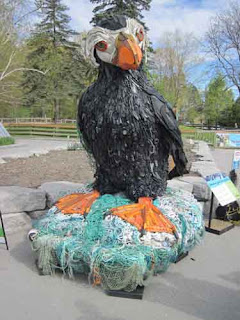 Each year thousands of pounds of plastic wash ashore on one Oregon beach.  A group of volunteers have been cleaning this debris from the beach.  This plastic has been made into artwork that reminds us that we need to stop our plastic consumption.  We visited the Toronto Zoo to see the giant animal ambassadors created by Washed Ashore.  The exhibit runs until November 2019. 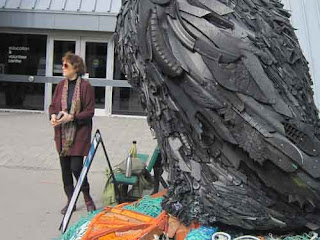 On the day we visited, Angela Haseltine Pozzi was there to talk about the organization.  She founded Washed Ashore in 2010 and is one of the main artists.  Since 2010 she has worked with volunteers to put in countless hours, collected over 40,000 pounds of plastic from the ocean and turned it into over 70 works of art.  There are eleven sculptures on display at the zoo.  Angela is standing beside Sebastian James the puffin. 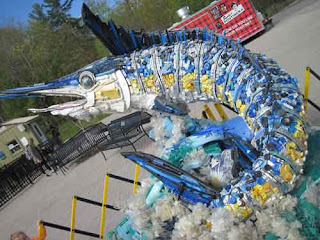 This sculpture by the zoo entrance is Flash the marlin.  Marlin are one of the fastest swimming fish in the ocean and travel many miles through the water.  They need the water to be clean and free of plastic that gets in their way. 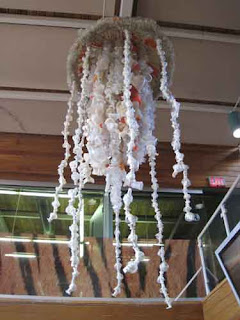 Sebastian James the puffin stands outside of the zoo's main gift shop.  Just inside the doors to the gift shops hangs a jellyfish made out of water bottles. 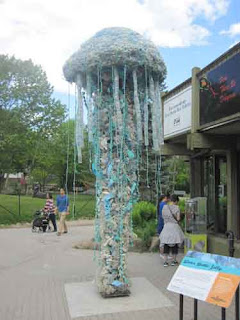 Outside of the Australasia pavilion is another jellyfish.  This jellyfish is also made from plastic water bottles.  We should try to drink from reusable containers and at home drink Brita filtered water from glasses.  The large packs of bottled water are a huge plastic waste, not to mention breaking your back by lugging them home.  Sea turtles like to eat jellyfish and sadly cannot tell the difference between floating plastic and a swimming jelly.  They end up filling their bellies with plastic instead of food. 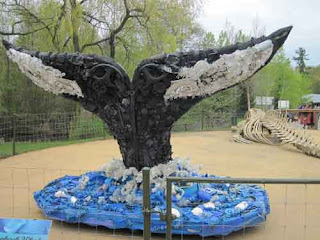 Just around the bend from the Australasia jellyfish is Grace the humpback whale.  Humans almost hunted humpback whales to extinction but today they can be found in all of the world's oceans. 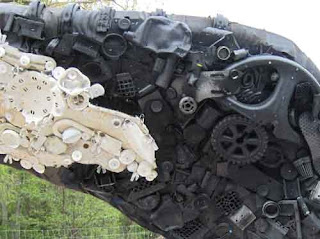 A closer look at Grace shows some of the plastic from toys, umbrellas and other items.  Sadly, the real humpbacks are forced to swim through this garbage every day. 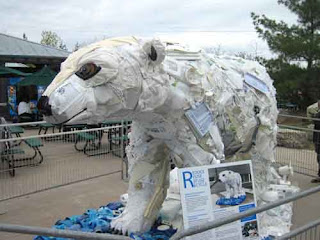 Poly the polar bear was made with the help of staff from the Toronto Zoo.  Poly's name comes from polyethylene, polystyrene and other names for plastic.  Poly is supporting the idea that we all try to reduce, reuse, recycle and refuse when dealing with plastics.  The best option is to refuse single use plastics. 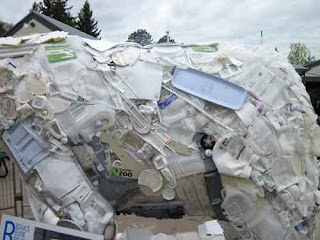 Poly is also made from plastic trays, containers and more garbage which came from the Rouge Valley surrounding the zoo. 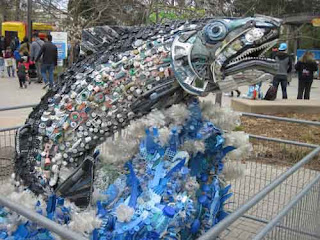 Nora the salmon is found near the Kid's Zoo.  Salmon travel up streams to mate and spawn.  The new salmon swim back to the ocean.  Unfortunately, millions of pounds of plastic polution also head downstream into the ocean each year. 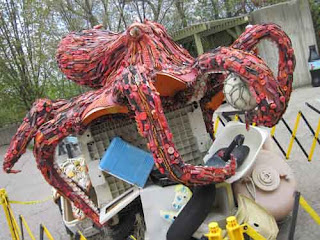 Octavia the octopus was sitting outside the Americas pavilion.  One of her arms was around the neck of a plastic Canada goose, but it should be trying to shake some sense into people who don't realize the consequences of their actions. 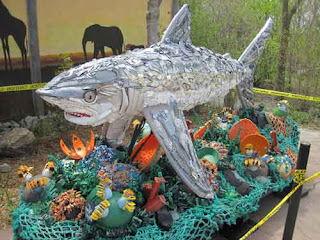 In the African savannah you can find Sylvia the silvertip shark.  Sharks eat other small fish who eat plastic and this means the sharks end up eating the plastic too. 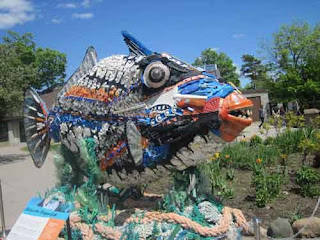 Rufus the triggerfish is near the Indian rhino house.  He is made up of children's beach toys, flip flops and even parts of chairs. 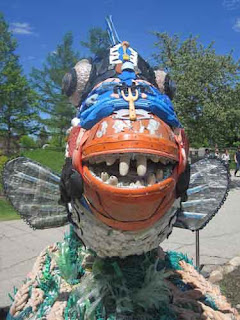 Triggerfish have sharp teeth and strong jaws that let them eat urchins and mollusks.  Plastic has been found with their bite marks, which means they are also eating this harmful human product. 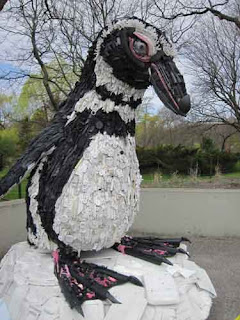 Oil pollution is the main threat to penguin populations.  Next to the black-footed penguin exhibit is Gertrude the penguin. 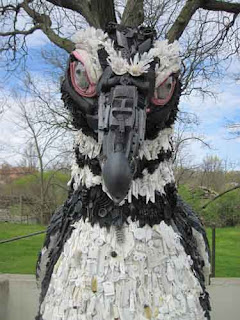 Gertrude looked down on us as if to say "You can do better!".  We all need to think about how we can help the animals.  Washed Ashore vows to keep on spreading their message as long as there is debris floating up on their beach.  They dream that they will one day run out of supplies for their art. 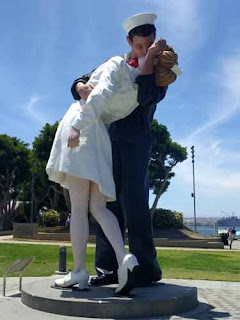 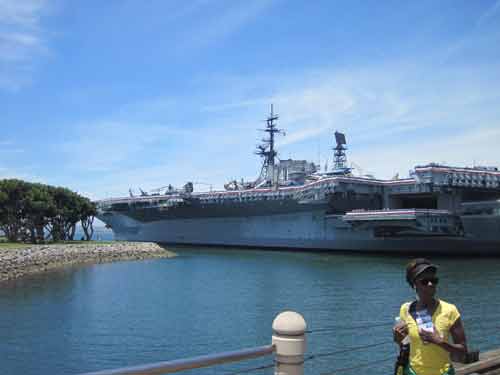 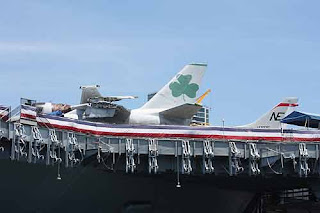 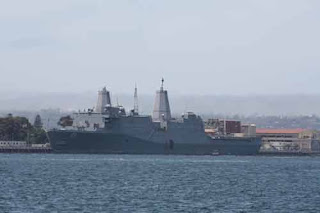 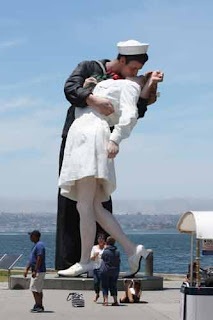 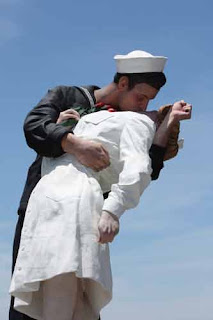 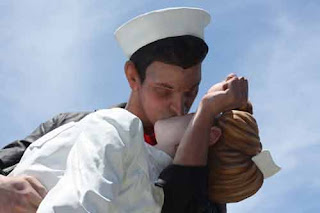 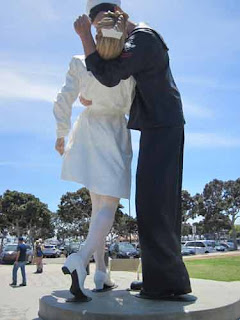 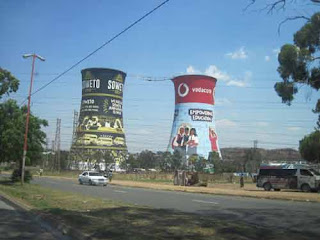 Two towers stand tall above anything else in the Soweto area of South Africa.  The 33 storey tall Orlando Towers are the last remaining structures of a coal fired power station.  The power station was built in 1935 and closed in 1998. 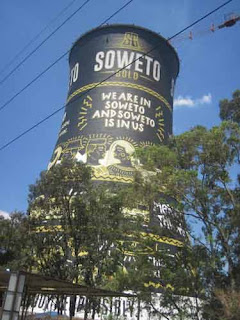 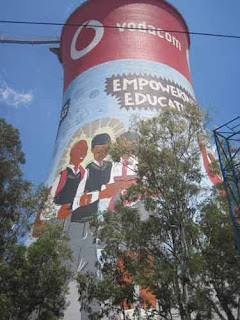 These days the towers are now completely painted with murals.   These murals have changed through the years but when we visited one was sponsored by local brewing company Soweto Gold and the other by telecom company Vodacom.  One tower states "We are in Soweto and Soweto is in us".  The other is for empowering education. 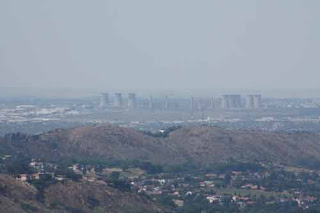 Other cooling towers that we saw as we travelled stood out against the skyline, but they were just plain looking. 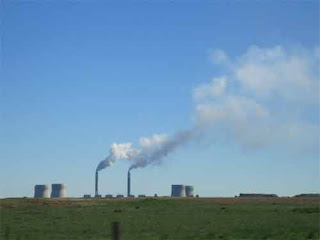 Some of these power plants were still in operation. 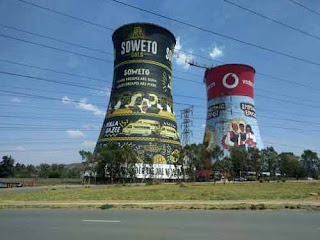 The towers are also famous for being the world's first bungee jump between two cooling towers.  Brave souls can jump from a little bridge that spans the two towers.  Between the artwork and the adventure it is safe to say that these are the most exciting cooling towers in all of South Africa, perhaps the world.
Map of Our World