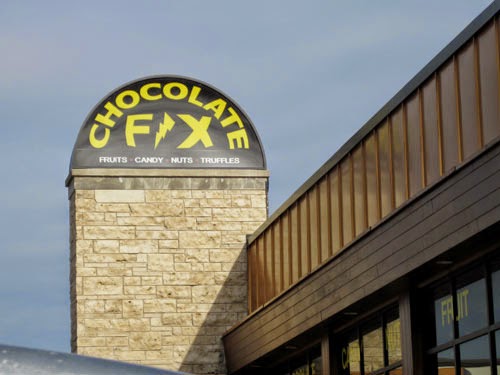 While we were visiting Niagara-on-the-Lake, we decided we could use a little chocolate to go with our wine.  Chocolate F/X offers tours of their factory to see the chocolate making process in action.  During the tour we were shown a cocoa pod which looks kind of like a football.  Inside rattling around you could hear the cocoa beans.  Our tour guide told us that the dark chocolate comes from the beans and white chocolate comes from the oils.
On the other side of a big window was the factory.  A worker was there wearing ear protection, a hair net and a beard net.  We guess technically he was wearing two hair nets.  The guide told us that whatever is being covered in chocolate is put into one of the giant metal drums and then chocolate is repeatedly coated over it.  Sometimes it takes the whole day to get just the right thickness of coating.  Once the product is ready it is taken out of the drum and the whole drum is cleaned by hand to get ready for the next batch.  There were some hair dryers which they use to help melt the chocolate off the walls during cleaning.
We were told that when the product emerges it is usually bumpy from bouncing around in the drum.  They then cover it in corn syrup to make it smooth and round like the public expects.  We say no need for the syrup.  Chocolate is chocolate.  Bumpy would be fine with us. 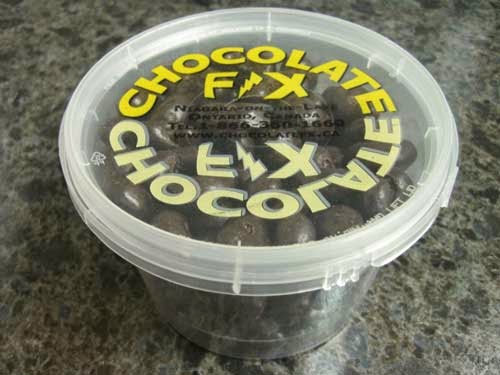 In the hallway where the tour takes place there were two pictures.  The bottom picture was of a messy child covered in chocolate.  This picture also appears on some of the packaging so we assume it is someone associated with the business.  The other picture was of a monkey in a thorn bush so concerned with cleanliness that he was using one of the thorns to pick his teeth.  We purchased a few tubs of chocolate and using a voucher from our hotel we were also treated to a chocolate dipped strawberry after the tour.  We managed to keep the chocolate off our hands and faces and get it into our mouths where it belongs.