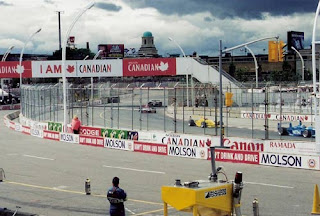 Once again engines will roar down by the lake!  The Honda Indy 2016 will take over the Exhibition Place grounds from July 15 to 17.  Back in 2003 when we attended the event it was still sponsored by Molson "Don't drink and drive" Brewery. 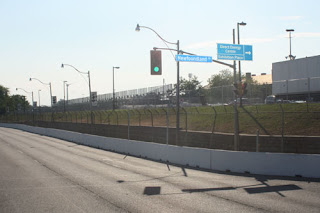 The barriers and grandstands have already been put into place well before event weekend.  We took the photo above near Lakeshore Blvd. and Newfoundland Drive.  Exhibition Place has a street named after each of Canada's provinces and territories except for one.  There is no street representing the Northwest Territories.  Perhaps Northwest Street was deemed too confusing for drivers?  When the racing weekend finally arrives if you are on any street near the Exhibition grounds you will hear it. 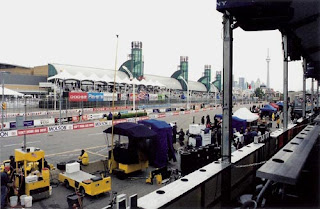 We were lucky enough to have seats right behind the pit lane.  This gave us a front row seat to watch the pit crews in action.  They perform a well choreographed routine when their driver pulls in.  Tires are removed and changed and both the car and driver get some much needed refueling.  Every second counts until the driver is back out on the race track. 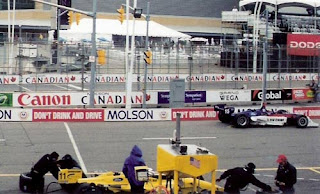 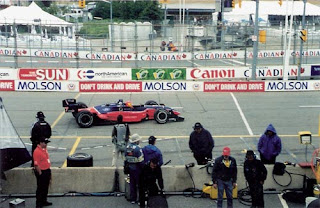 The cars raced past us at average speeds of around 100 miles per hour.  We took lots of photos and we had to time it just right in order to catch a vehicle in our shot.  You could hear the noise of a vehicle as it changed gears and came around the bend and then roared ahead as it entered the straightaway. 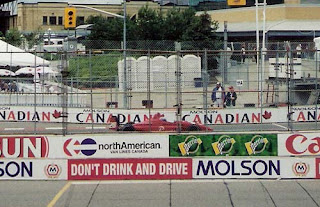 The only time it was easier to film the Indy cars was when there was a caution on the track and the pace car was released to lead the vehicles.  The Indy cars are actually Champ Cars that get their name from the most famous race, the Indianapolis 500. 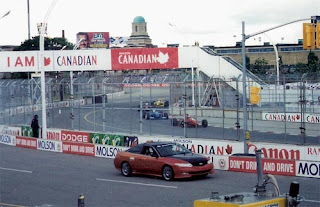 The 2003 race was won by Paul Tracy from Scarborough, Ontario, Canada. 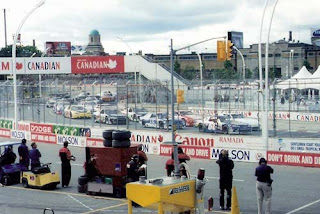 Over the course of the day we also witnessed a CASCAR stock car race.  CASCAR stands for the Canadian Association for Stock Car Auto Racing.  Their pit crews must roll out the equipment and set up on the pavement in front of the Indy car pit lane.  That race was followed by a Formula 1600 race.  Eventually the race day had to come to an end and the engines fell silent. 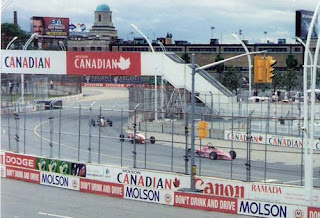 You can drive through the Exhibition grounds yourself while the barriers are still in place and pretend you are on your victory lap.  Keep in mind that while race car drivers are paid to push their cars to the limit, the rest of us will have to pay if we don't obey the traffic laws.