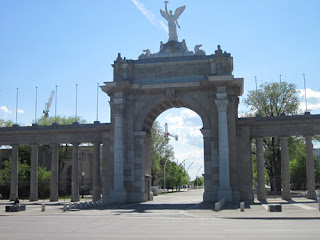 The Exhibition or C.N.E. has been a part of summer in Toronto for almost 120 years.  The eastern entrance to the Canadian National Exhibition has become an instantly recognizable symbol of the annual fair.  It is known to many people as the Princess Gates, but that is due to confusion when hearing its true name of the Princes' Gates. 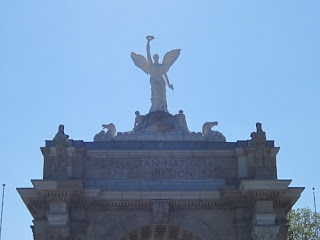 The inscription on the front of the gates reads Canadian National Exhibition 1897 to 1927.  It was during the C.N.E. in 1927 that the gates were officially opened by Prince Edward and Prince George.  The gates were named as belonging to the two princes. 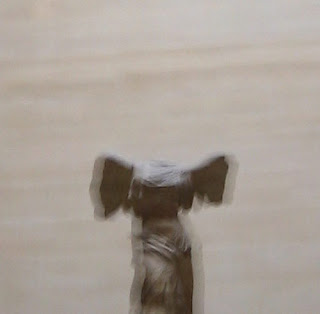 Another reason for the Princess confusion is due to the winged woman who stands atop the gates.  She is meant to be a copy of the Winged Victory of Samothrace which can be found in the Louvre in Paris.  We visited her headless, armless body during our trip to Paris and took this wonderfully blurry photo (above). 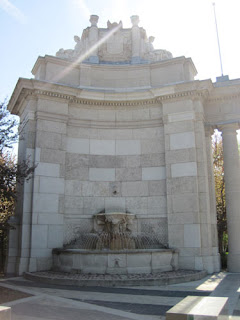 At each end of the gates is a fountain.  That would be one for each Prince. 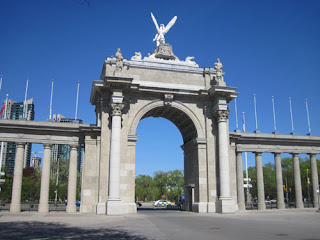 Above is a photo from inside the gates with Victory looking away towards the rest of Toronto.  Below is a paper version of the gates which was on display one year during The Exhibition. 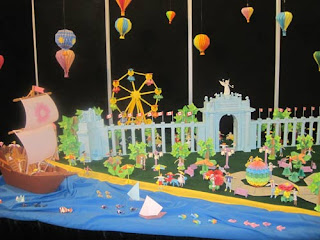 The C.N.E. runs for about two weeks at the end of August and ends on Labour Day which is the first Monday in September. 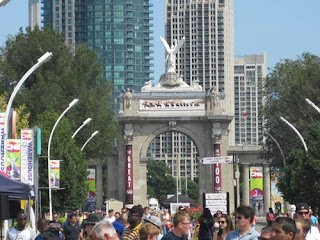 During the Canadian National Exhibition the area behind the Princes' Gates is filled with pedestrians, midway rides and strange food combinations.  During the rest of the year, you are free to walk or even drive through the gates and head down Princes' Blvd.  That's Prince's Boulevard, not Princess.