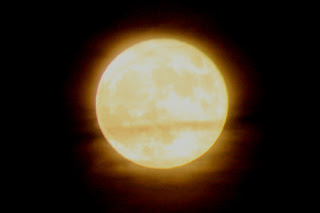 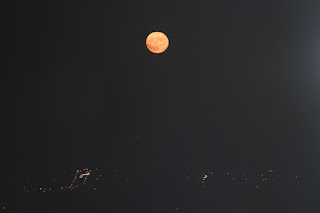 On Monday, November 14th, 2016 there was a super moon.  On the evening of the 14th we waited for darkness to fall and looked out the window.  At first there was nothing.  Then we started to see a glow behind the clouds and finally the moon revealed itself.  We grabbed our tripod and headed out into the streets to get a better look.  We headed for the closest, darkest place, which just happened to be a nearby hydro field. 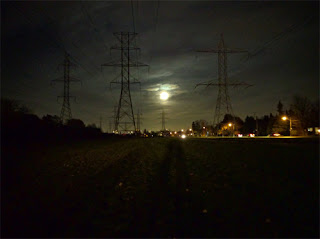 The moon appeared blurry again behind some cloud cover, but we patiently waited it out.  We moved our tripod off the pathway and tried to get set up for the perfect photo between the hydro lines. The clouds started to move away again and the bright glowing orb revealed itself once more.  The perfect shot was right in front of us.

A dog had spotted us in the darkness and wanted to let everyone know.  We are aware that the moon has an effect on the tides and there is talk of it affecting the mood of people.  We don't know if this dog was just excited to see us or if he was extra, super moon excited.    His owner apologized for the shock and they continued off into the night. 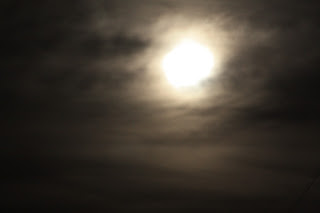 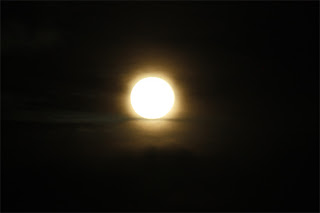 Now we focused our attention back to the moon.  After several unsuccessful shots, we did determine that we need some lessons on how to use our camera.  We took pictures using various settings and hoped for the best.  The next day we compared our pictures against other photos of the moon that we had taken through the years.  We were happy to discover that compared to those blurry, misshapen blobs these were the best ones yet.  Super! 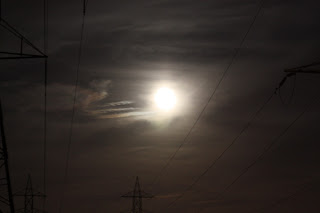 Post # 145
Posted by On Vacation at 12:30:00 am
Email ThisBlogThis!Share to TwitterShare to FacebookShare to Pinterest
Labels: Canada, Natural Beauty, Ontario, Toronto
Location: Toronto, ON, Canada