Thanks to a 5 hour delay we missed our connecting flight to Maui.  This meant spending the night in Vancouver and more time in the Vancouver airport than we would have liked.  If you are going to be stuck in an airport, Vancouver's is rated one of the best.  It is especially known for its artwork.  As we wandered through the airport towards our hotel shuttle, we were sad that we would not fall asleep to the sound of Pacific Ocean waves hitting the Maui shore.  The airport tried to cheer us up as we came across three carved sculptures (above).  Left to right they are "The Blind Halibut Fisherman", "Raven Stealing The Beaver Lake" and "Raven With a Broken Beak". 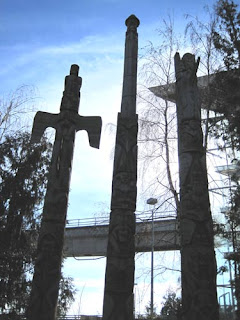 After spending the night near the airport, we took our hotel shuttle again and were dropped off near the departure gates.  The first thing we noticed was 3 totem poles towering over us.  We dropped off our luggage and checked in for our flight. 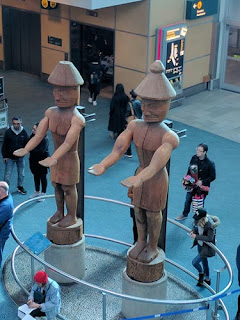 As we headed towards our departure gate we encountered the Clayoquot Welcome Figures. These carved figures are often placed on the beach in front of a village to welcome guests.  Today they were welcoming us. 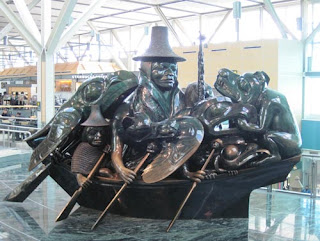 "The Spirit of The Haida Gwaii: The Jade Canoe" is the most famous piece in the collection.  It has been on display at the Vancouver Airport since 1996 and used to be printed on the back of the Canadian twenty dollar bill from 2004 to 2012.  The canoe is overflowing with characters from Haida mythology. 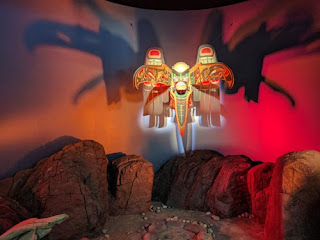 Once we had made our way through customs and entered the gate area, all we had to do was wait.  A red lit sculpture caught our eye.  It was a transformation mask that would be worn by ceremonial dancers.  When it is closed it looks like the head of a raven. When it is pulled open it reveals the fearsome face inside.  It is kind of like us when we heard the news about our connecting flight yesterday.  "We are sorry there are no other flights headed to Maui this evening".  Bak! Mask open! Fearsome face revealed. 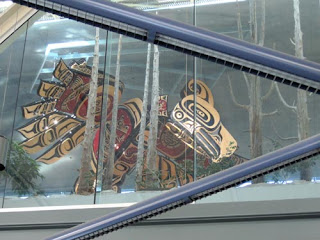 While we waited for our flight, we could see other passengers arrive through the Pacific Passage.  A large bird called a Thunderbird hovered above them as they wandered underneath, disorientated and wondering if they would ever be reunited with their luggage. 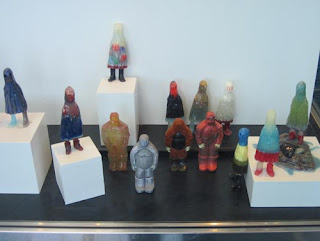 Other smaller exhibits could be found around the airport such as the figurines above.  The majority of them looked like trick-or-treaters wearing bed sheet ghost costumes. 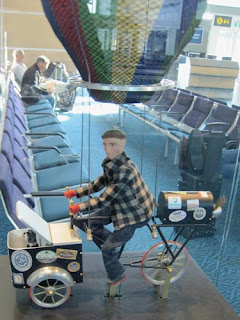 This final exhibit required you to place the palm of your hand against a special spot.  When you did, the little man started to peddle his bicycle and every so often a dog popped up out of the front basket.
We did eventually make it to Maui only one day late.  It wasn't how we planned our vacation, but thanks in part to the Vancouver Airport it wasn't that bad.