The Blue Whale at the ROM

Did you know the blue whale is the largest animal on earth?  It is and during August 2017 the Royal Ontario Museum is running a blue whale exhibit.  Back in 2014 there were nine blue whales that became trapped in ice and died.  Two of these whales washed up on the shores of Newfoundland.  Scientists quickly jumped at the rare opportunity to closely examine these mammals.  The exhibit at the ROM is a direct result of this work. 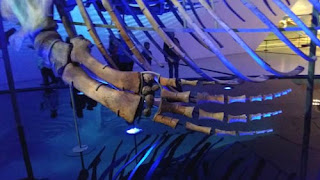 A team of scientists had the difficult and smelly job of taking the whale apart in order to preserve the 80 foot long skeleton.  The exhibit included a watch from one of the scientists that will never smell clean again.  After 2 years the bones were finally ready to be on display in Toronto. 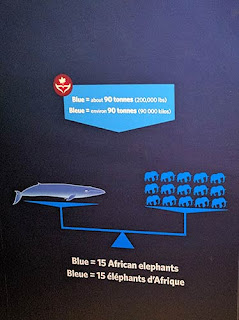 Nothing about a blue whale is small.  It weighs 90,000 kg which is the same as 15 elephants.  Elephants are the heaviest land mammal. 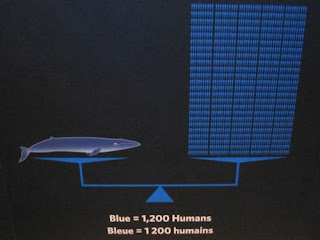 In terms of humans it would take 1200 to equal the weight of the blue whale.  That was quite a few more than the amount of people crowding the exhibit hall with us. 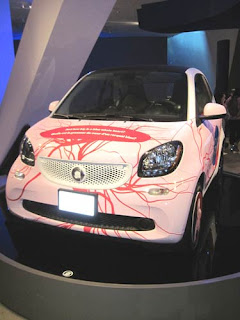 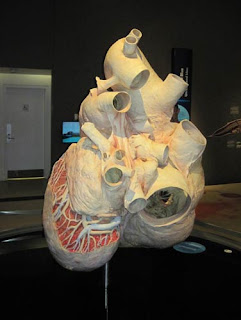 The heart of the whale had been plastinated and was on display.  It was almost the same size as the car parked across from it.  This is the first and only blue whale heart to ever be preserved.  A human heart usually beats somewhere between 60 to 100 bpm.  A blue whale heart beats at a rate of 10 to 30 bpm even when the whale is active. 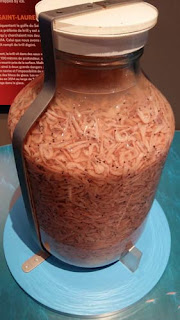 Whales eat a small crustacean called krill and can eat up to 40 million krill per day.  Krill eat plankton.  Plankton eats some of the nutrients found in whale feces.  Plankton can also perform photosynthesis which removes carbon dioxide from the air.   This cycle makes the planet better for all of us. 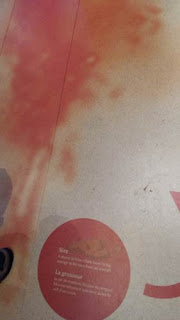 Blue whale feces, like the orange stain above is large enough to be seen from an aircraft. 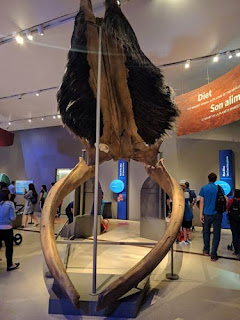 Blue whales eat krill by using the baleen in their mouths.  They do not have teeth.   A blue whale takes a giant mouthful of water.  It then pushes the water out through the baleen.  Krill is trapped inside its mouth as it can not pass through the baleen filters.  Dinner is served. 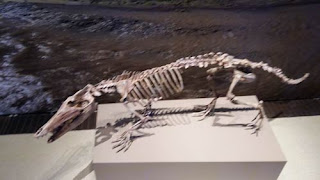 The first whale is believed to be derived from Pakicetus (above).  The fossil above shows the Pakicetus and eventually it would evolve into the whales that we see swimming in the oceans of today. 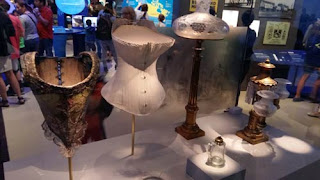 People used to hunt whales to make whale bone products like those pictured above.  More needs to be done to protect these endangered animals.  The blue whale at the ROM is here to help educate and amaze us.  Scientists are working hard to make sure that we do not see the last blue whale in our lifetime.  We hope to see our very first blue whale when we visit the Saguenay River in Quebec later this year.

This location is near Museum subway. Visit other Toronto TTC stations.