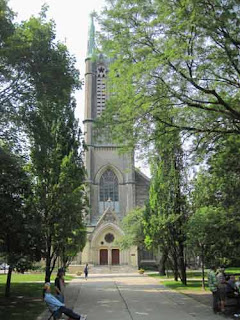 When William Murdoch and Dr. Julia Ogden finally got married, we were there. Well not really, since they are from the fictional television show Murdoch Mysteries that takes place in the early 1900s. What we did do was visit the place where the wedding episode (season 8 episode 4) was filmed. That's about as good as we can get. 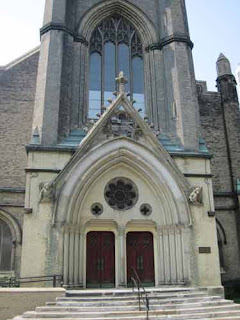 Murdoch and Julia were married at the Metropolitan United Church in Toronto.  We visited the church during Doors Open Toronto 2018.  It is located at the corner of Queen Street East and Church Street. 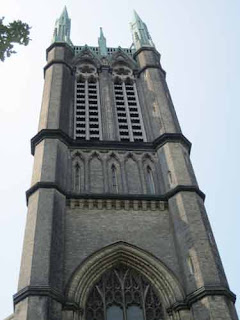 According to a plaque outside the church it is designed in a High Victorian Gothic style.  The cornerstone was laid in 1870 and the church was dedicated in 1872. The plaque also lists other important dates for the church including a fire in 1928 which required the church to be rebuilt. Most of the walls, tower, stained glass and narthex are original. A narthex is a long narrow enclosed porch usually along the west entrance of a church, but you already knew that. 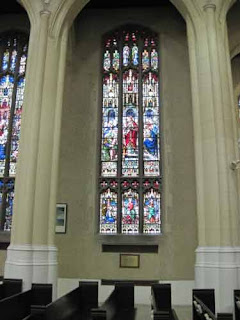 According to one fan's calculations, Murdoch and Dr Ogden married in May of 1902.  That was well before the fire.  Let's take a look at some of the scenes from the episode. 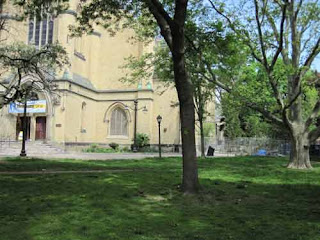 There is a reception tent set up just beside this thin pathway on the east side of the church (photo above).  Mrs. Brackenreid is trying to get everything to run smoothly. 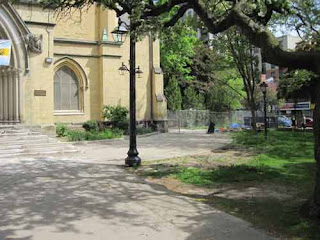 When Dr. Ogden arrives in her horse drawn carriage, she comes around this little curved brick path.   Murdoch is quickly ushered in through the front doors of the church so he does not get an early glimpse of his bride on their wedding day. 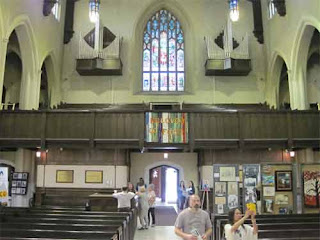 When Julia does finally enter the church she proceeds down the aisle. Inspector Brackenreid is the one who gives her away. 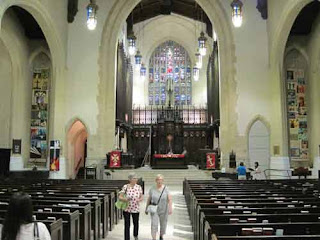 She heads down the aisle towards Murdoch who is waiting up at the altar. 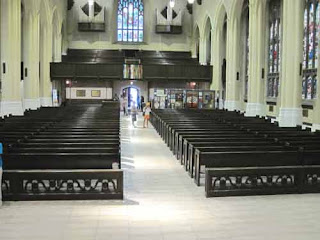 The church is filled with their guests. 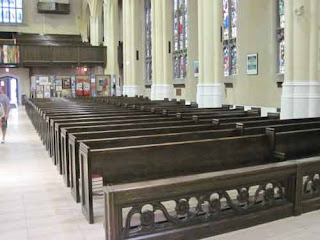 The Brackenreids are up front on the right. 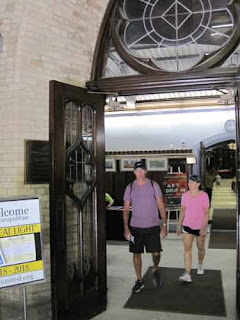 Despite wanting to leave to try and solve a case, William and Julia do finally get married and head through these glass doors.  The couple above obviously is not from the early 1900s.  William and Julia were also dressed at their best. 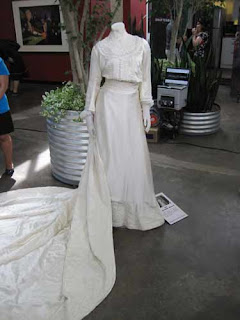 During Doors Open we also got a glimpse of the actual gown that Julia wore at her wedding. 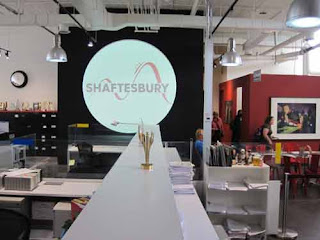 Shaftesbury is the company that produces Murdoch Mysteries.  At their offices they had Julia's gown on display along with other costumes and props from the show. 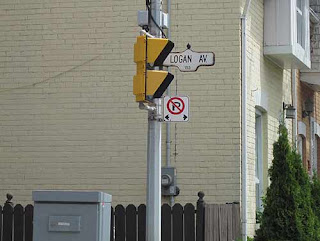 Shaftesbury's offices are located on Logan Avenue.  We found it amusing that another show they produced, The Listener, has a main character called Toby Logan.  "Hmm, I like the name Toby, but he needs a good last name."  "I'm going to go outside for a smoke."  "I've got it!  Logan!  It just came to me." 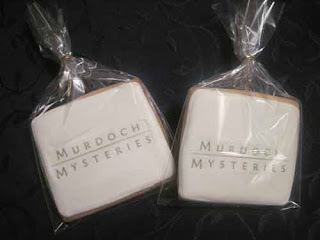 During the Murdoch Experience 2014 we even signed a guest book for the happy couple and were given some special Murdoch Mysteries cookies.  This was before the episode aired. Now we have also been inside the church.  Congratulations again to Julia and William on your marriage.  We wish you many more seasons together. Thank you for sharing your wedding day with us.
Map of Our World