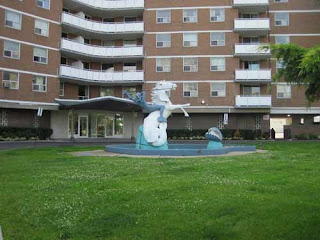 We were taking a walk on Islington Avenue headed towards the many painted murals that can be found along Dundas Street West.  Not very far north of Islington subway station there was a fountain outside of an apartment building that caught our eye. 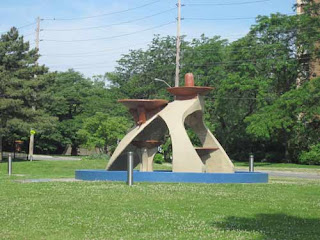 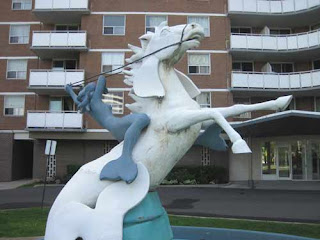 As we drew closer we realized this was not a regular horse but a seahorse.  It looked like a regular horse rearing up on its hind legs, except it didn't have hind legs.  Instead it had a tail like a fish. We have chosen to call this a "merhorse".   In Greek mythology, Poseidon was pulled across the water on his chariot by a team of hippocampi (seahorses).  Poseidon is known as the god of the sea.  He is also known for creating the horse.  So if he wants to spend his day out on the water with half fish, half horses pulling him around, who could stop him? 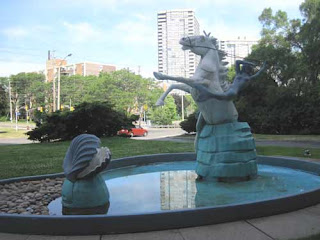 The sculpture sits outside of some rental apartments on Cordova Avenue.  From the opposite side it appears that the merhorse has no hind legs or tail.  We couldn't find any real history about this sculpture so we are inventing our own.  To us it looked as if the horse probably did have legs and then something happened to the sculpture.  Maybe it was damaged?  We do not know.  Maybe it came from part of another larger sculpture?  In order to help support the sculpture it was decided to put some blue rocks.  Now with the legs missing a tail was added.  If you look at the picture of the tail above it does look to be made from different material and is much whiter than the rest of the horse. Sorry, the merhorse. 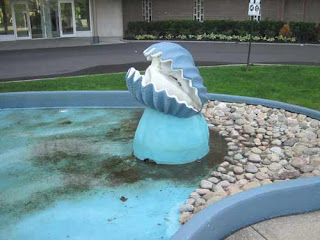 Now who is the natural nemesis of this mighty water stallion?  Why of course it is the giant clam.  A real giant clam lives off of algae and opens its mouth when there is sunlight so the algae inside it can photosynthesize.  When there is no sun, it closes its mouth again.  It does not spend its day chomping on various sea creatures.  This still doesn't mean you should go sticking your hand inside a giant clam any time soon. 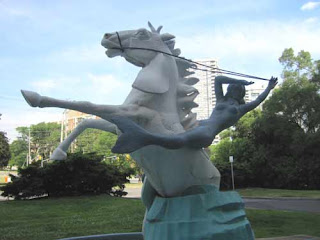 The woman riding the merhorse is not your average woman either.  She is a mermaid.  Closer inspection reveals that she is not your average little mermaid.  She has two legs with flippers instead of just a tail.  Some research shows that this makes her a siren or two-tailed mermaid.  This would definitely make it easier to ride a horse instead of always going side saddle.  A two legged mermaid is also not as unusual as you might think.  Now where have we seen one before.... 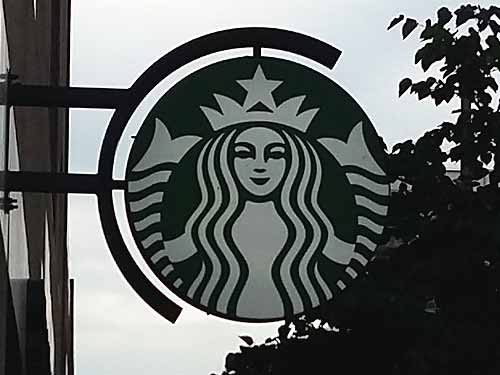 Only everywhere!  The Starbucks logo features a two legged mermaid.  You can see her green legs up on each side of her head.  Earlier versions of the logo even used to show her full body.  Melusine is one character from folklore who is half woman, half fish and who had her husband swear an oath that he would never watch her bathe.  This way he does not realize she is part fish.
This sculpture is a very interesting piece of art that brings up a lot of questions both about its creation and what it is depicting.  Yes, there is a Starbucks at Bloor & Islington so grab a coffee and then spend some time trying to figure it all out.

This location is near Islington subway. Visit other Toronto TTC stations.