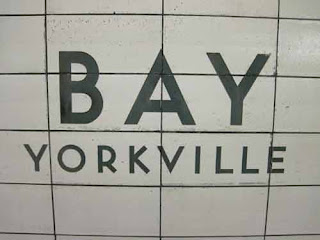 The Toronto Transit Commission runs the subway system in Toronto.  Bay Station is one of the stations along Bloor Street.  Bay Station also has a hidden lower station beneath it which was only used briefly in 1966.  It has become known as Lower Bay and has not seen much action as far as commuters since it was closed.  What it has seen is an increase in movie stars. 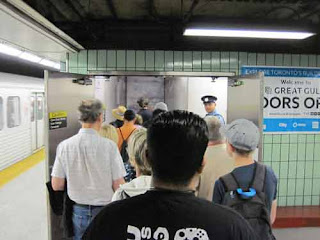 We finally visited Lower Bay during Doors Open Toronto 2018 when the public was allowed inside.  You enter the station from the platform of Bay Station. 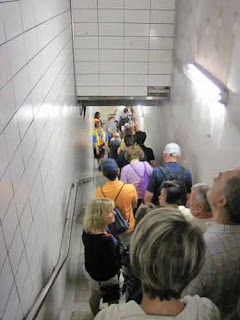 Then you head down a long stairwell to this hidden filming location.  Over a series of posts we will describe some of the movie scenes filmed on the TTC.  We hunted down these movies and actually watched them.  The TTC had posters from some of the movies displayed on the platform.  Also thanks goes out to Transmania Ontario for this video, Transit Toronto for this list, and Reel Toronto for these posts.  We have chosen not to get too detailed on the plot or to express our opinion of the movies. A lot of them despite featuring well known actors are not well known movies for a reason.  You will just have to decide if you want to watch them for yourselves.

Okay, let's see what Hollywood has been doing in Toronto's sub-subway. 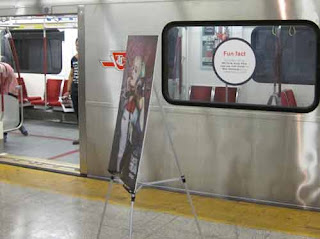 Suicide Squad is the highest grossing movie ever filmed in Lower Bay Station.  The movie is part of the DC comics universe and is about a woman who becomes possesed by a witch known as Enchantress.  Enchantress frees her brother who possesses a man.   He goes out onto the Lower Bay platform and takes over several other people.  They all fall onto the tracks and using the third rail for strength he crashes through a subway train.  We couldn't get onto the tracks during Doors Open as two subway trains were parked there for safety reasons. 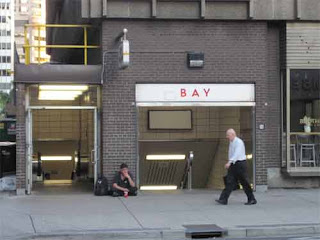 The Suicide Squad is assembled from a group of imprisoned criminals to defeat the Enchantress.  Later in the movie, the Suicide Squad wait outside Toronto's Bay Station.  They replaced the exisiting BAY sign with a different Bay St. sign for the movie. 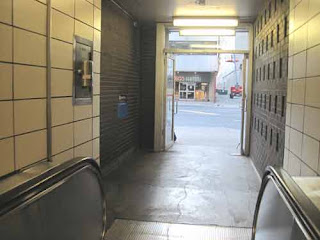 Deadshot (Will Smith) leans against the tiled wall on the right while Harley Quinn (Margot Robbie) sits on the escalator rail on the left.  Special forces colonel Rick Flag, Killer Croc, El Diablo, Captain Boomerang and Katana are all there as well. 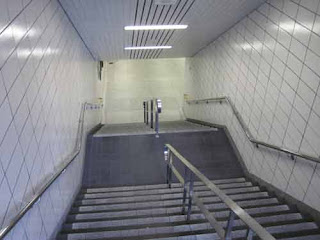 Killer Croc swims into a flooded lower portion of the station and the rest of the crew walk the Lower Bay
platform which is covered in remains and black residue from the Enchantress's brother's attack.  It seems they used Lower Bay to pretend it was Upper Bay for the movie. 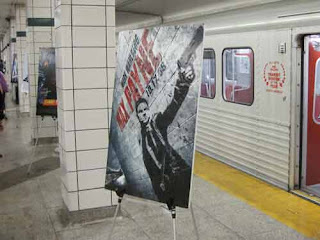 Max Payne is a movie based on a video game.  Mark Wahlberg is a cop with a dark past obsessed with finding out who killed his wife and child. 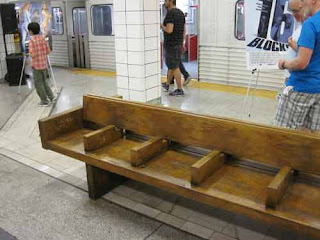 He walks along the platform and three twitchy junkies sit on a wooden bench.  They notice his nice shiny watch.  When he enters the men's room they confront him for his watch. He tells them to come and get it.  The washroom gets destroyed. One junkie runs into the tunnel where he is attacked by flying shadows. Mark keeps his watch. 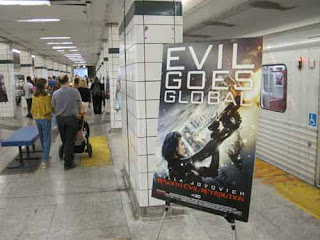 You can usually tell a movie is filmed in Lower Bay by its distinctive white pillars with a blue green stripe near the top.   Almost all of the movies we watched did nothing to hide them.  Resident Evil : Retribution is a zombie movie based on a video game and stars Milla Jovovich.  Milla walks along a subway platform with her daughter.  This time Lower Bay station is made up to look like a Russian subway station with large yellow and red pillars.  They encounter Michelle Rodriguez there and Milla gives Michelle a gun to defend herself from the zombie hoardes.  Milla leaves to rescue the rest of her team and after a car chase they all end up back on the subway platform.  They escape by going down into the subway tunnel.  When they climb down from the platform onto the tracks you can see the distinctive Lower Bay pillars.  You can also see the fancy Russian pillars behind them further along the platform. They only dressed part of the station for the movie and figured we wouldn't notice. 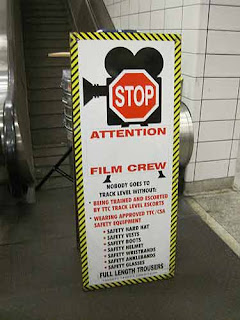 Since Lower Bay is an unused station it also much safer to film there than at a live station.  You can cut all the power when your franchise star (from six Resident Evil movies) gets near the third rail.  Not to mention the film crew.  The photo above shows a list of required equipment for all the crew. 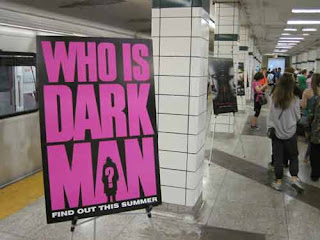 Another movie that filmed somewhere on the TTC was Darkman II.  We started to realize that the posters on display were not all movies filmed at Lower Bay, but somewhere on the TTC system.  We also realized that the Darkman poster they had on display was for the original movie and not the sequel.  The first movie was directed by Sam Rami, filmed in Los Angeles and starred Liam Neeson as Darkman.  The sequel was directed by Bradford May, filmed in Toronto and starred Arnold Vosloo as Darkman.  Liam Neeson has a very particular set of skills so you just can't go and replace him.  Anyway, the only short scene from Darkman II that was filmed on the TTC is when Darkman drives his home-made train car through the tunnels. 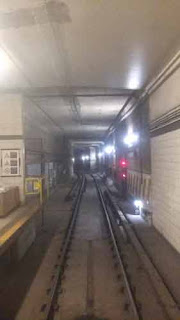 During Doors Open we were able to go into the front subway car and take some photos of the subway tunnels.  Many actors have run into one of the four tunnels at Lower Bay and maybe even the non Liam Neeson Darkman rode his special train car through here too. 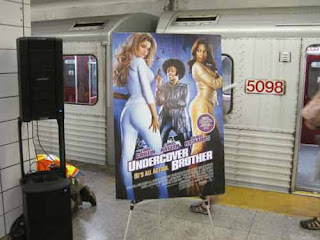 There was a poster of Undercover Brother in Lower Bay.  We could not determine where or if this movie ever filmed on the TTC.  Maybe some deleted scenes?  This seems like a good spot to end this blog post as we are going to go and watch Undercover Brother one more time.  We will revisit Lower Bay Station again in another post.

This location is near Bay subway. Visit other Toronto TTC stations.