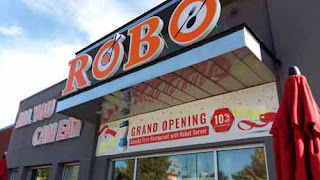 A new sushi place has arrived in Toronto and offers something a little different.  Robots are nothing new, but we are not yet used to them serving us our food.  Robo Sushi still has human workers, but we went there to see the robotic staff and of course to eat all that we could eat. 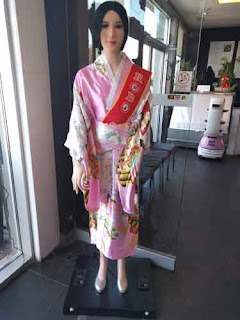 As we entered the restaurant we were greeted by a talking mannequin. 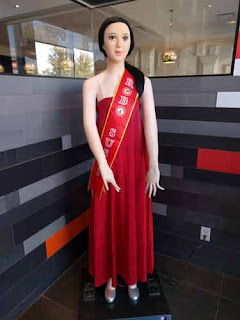 There was another mannequin standing behind us, but despite being plugged in she didn't have anything to say.  We headed through the next set of doors and into the restaurant. 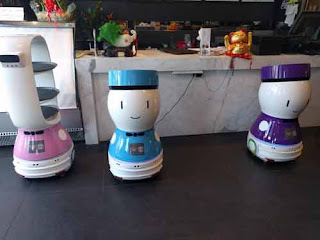 Three robots waited for us.  Two of them had cute, smiling bellhop heads and one had a head full of trays.  They stood at attention waiting to serve us. 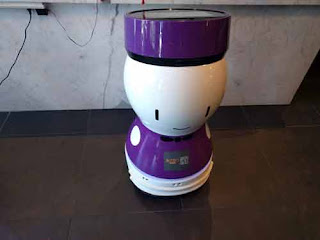 The human being at the counter greeted us and typed something into the tablet on the top of the purple robot's head.  The little guy rolled away and we followed closely behind.  On a screen on top of his head was a video of a person following a robot.  We felt we were doing quite well.


Our host turned a corner and then stopped at a booth.  He said something but we couldn't hear him over the restaurant noise.  We sat down and then our host turned and rolled off again. 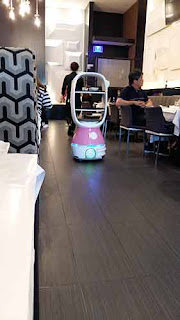 We have visited Robo Sushi twice since it opened.  The first time the robots seemed less sensitive to something in their way.  We witnessed a host and trayhead collision and a few near misses between robot and human staff.  One trayhead robot even went straight into a customer's chair. 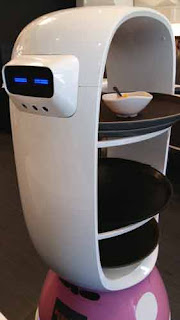 On our second visit we noticed that the human staff often had to push a host or trayhead robot until it felt nothing was blocking its path.  Once the robot was satisfied it would roll away again.  Eventually the programming will be just right.

When a trayhead robot arrived with your food it would turn and face the table with its blinking eyes.  You could start to offload the food yourself, but usually a human staff member would come to assist. 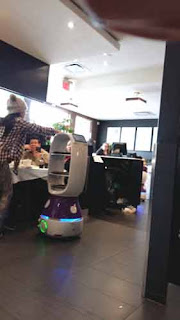 When you wanted the trayhead robot to leave again you were supposed to tap it on the head.  This worked sometimes because we were probably doing it incorrectly.  We think you have to just place your hand on top of a little hand symbol on the robot's head. 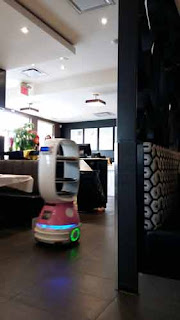 To order your food you use a tablet placed at your table and submit your request from there.  Soon it won't be long until a trayhead arrives loaded with your carefully selected items. 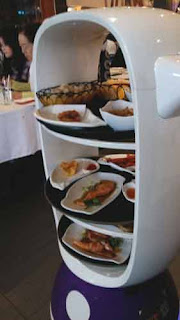 We tend to order quite a lot on our first round so when our robot arrived it was fully loaded.  Soon afterwards our table was filled with tiny trays and dishes. 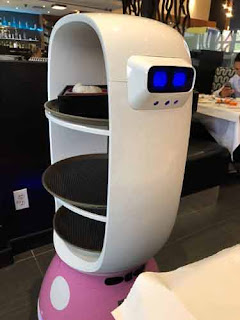 You could also place a small order and a trayhead would come to drop that off as well.  When it comes to All You Can Eat you need to pace yourself.  At least the robots never gave us a disapproving look based on our food choices or quantities.  They just give the same look all the time. 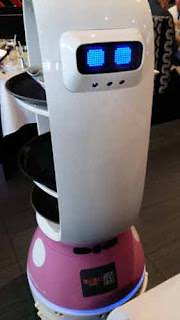 We enjoyed our food at Robo Sushi and the robots made our meal even more fun.  As we rolled ourselves out of the restaurant we waved good-bye to our robot hosts.  They smiled back at us.
Map of Our World