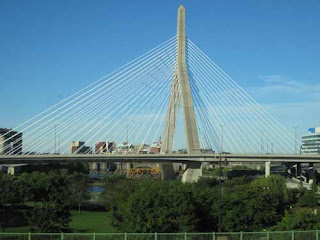 The Big Dig was an ambitious project in Boston.  It took the elevated roadways that ran through the city and moved them underground.  It cost billions of dollars and ran well over budget.  Construction started in 1991 and finally finished about 10 years later than anticipated in 2007.  Still, it was an example of long term thinking that changed the face of Boston forever.  We think for the better. 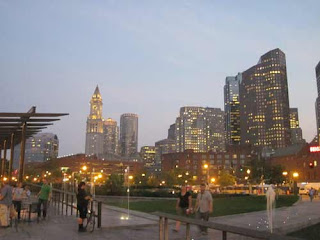 As part of the project,  the Leonard P. Zakim Bunker Hill Memorial Bridge was built over the Charles River and the Rose Kennedy Greenway (above) was built where the old highway once stood.  Both projects were named after prominent figures from Boston.  Leonard Zakim was a civil rights activist and Rose Kennedy was the mother of president John F Kennedy along with 8 other Kennedy children. 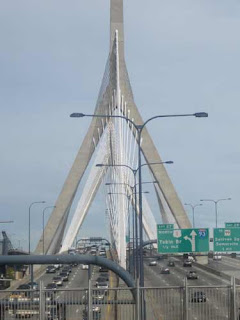 The Zakim Bridge has become a recognizable Boston landmark.  It was the widest cable stayed bridge in the world at one point.  In the movie Zookeeper, Kevin James climbs the bridge on the back of his gorilla friend Bernie.  They are trying to find the taxi Rosario Dawson is taking to the airport and stop her.  Thanks to the Zakim Bridge and the Big Dig getting to the airport in Boston is easier than ever. 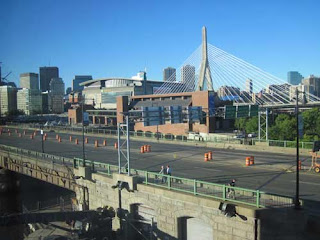 We have stayed at the Marriot Residence Inn in Charlestown on more than one occasion and had a view of the Zakim Bridge from our room.  The closest bridge is North Washington Street Bridge and the Zakim Bridge is behind it.


We often took a shortcut through the Charles River locks to get from our hotel to the subway.  It was also more fun, especially when a boat was passing through. 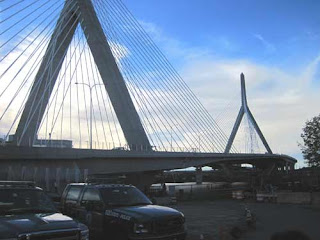 You can also get a nice close-up view of the bridge by day. 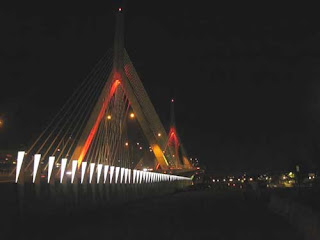 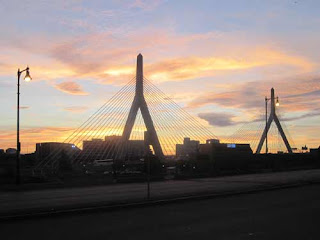 When the sun sets the upside down Ys that hold the cable and support the bridge stand out against the sky.  The Zakim Bridge and parkland created by the Big Dig make walking around Boston a pleasant experience.  You almost forget that underneath your feet hundreds of cars are rushing through tunnels trying to get across the city.
Map of Our World