The Polar Bear & The Frog 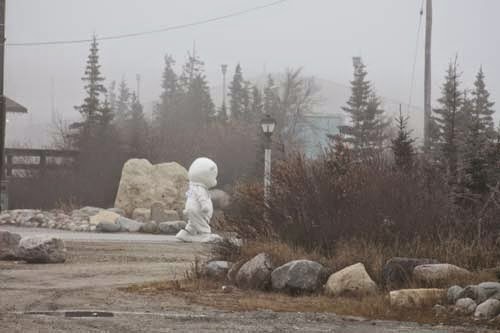 Churchill, Manitoba is the polar bear capital of the world.  This means that occasionally you may see one walk right down the main street and you should always be on alert.  While we were in Churchill we didn't encounter any bears in town, we did however have this very unusual experience.
We had just exited the Parks Canada Visitor Centre when we spotted something big and white walking down the street.  It was someone dressed up in a polar bear costume.  We wondered where could they be going?  We hurried up to the main street to see what was going on.  As we turned the corner what should be headed our way but a frog driving an ATV.  Of course. The frog waved to the polar bear. 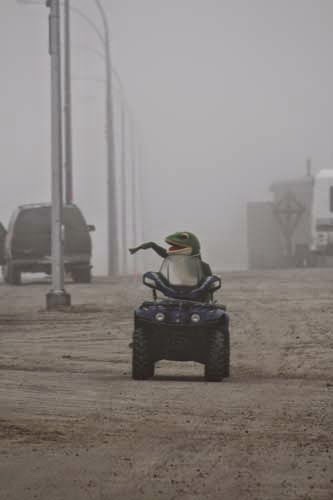 And the polar bear waved back  We got the impression that they knew each other. 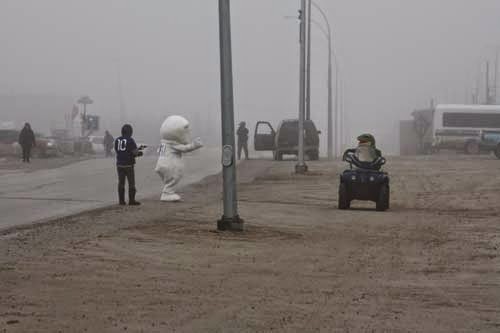 The bear continued up the road and as he walked along he waved at everyone he saw.  When we recounted this story to one of our tour guides, they were quick to point out that it is against the law to impersonate a polar bear in Churchill.  Even if it is a cute, big headed one that walks upright.  As we mentioned before the real bears often end up in the middle of town.   You run the risk of being tranquilized and hauled off to Polar Bear Jail.  Our guide was unaware of any penalty for impersonating a frog. 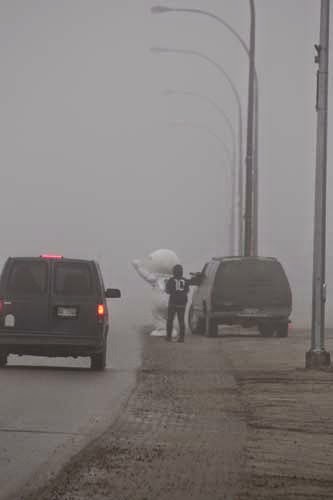 By the time we caught up to the action the bear had headed into Gypsy's Bakery & Restaurant.  The frog had parked his ATV and joined the bear inside.  As we walked up to the restaurant we noticed the camera crew that had been filming the entire event.  We also noticed the Japanese flags on their vehicles.  We are not sure how they obtained their vehicles, but we do know that there are no roads to Churchill.  Anything that arrives in town comes either by train or by plane, so vehicles are usually hard to come by. 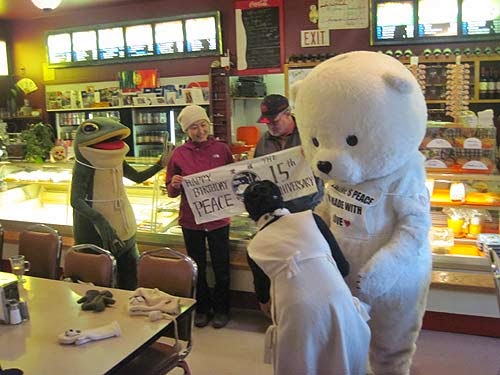 When we finally entered the restaurant,  the polar bear and the frog were with another woman who had grabbed a few people and they were holding a sign that said "Happy Birthday Peace The 15th Anniversary".  As the woman tried to explain that she wanted everyone to sing Happy Birthday, more people crowded into the doorway of the restaurant.  As everyone was just standing around, the restaurant owner asked if we would either come in or go out.  We chose out, and made our way back out onto the street.
Seeing a polar bear in Churchill is a common sight indeed, but this bear lead us on an unusual journey that may never be explained.

The Polar Bear & The Frog
Post # 42
Posted by On Vacation at 12:30:00 am
Email ThisBlogThis!Share to TwitterShare to FacebookShare to Pinterest
Labels: Canada, Churchill, Manitoba, Performances
Location: Churchill, MB, Canada