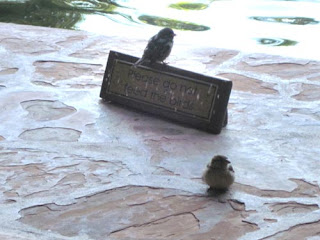 You need to always be on the lookout and whatever you do, do not go back to the buffet and leave your plate unattended.  Think that an extra slice of toast would go well with your bacon and eggs?  Think again!  By the time you return, there might be nothing left on your plate.  If there is anything left it has already been worked over by tiny beaks and feet.  This is a list of birds to keep an eye out for.  Our experience was at the Hyatt Regency Maui, but you should be cautious anywhere on this Hawaiian island. 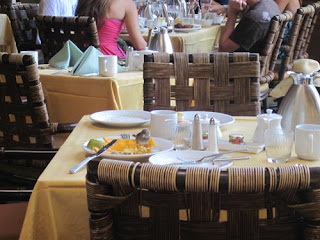 Sparrows are the most abundant and never miss a chance to share in the buffet.  As soon as someone gets up from their seat, sparrows descend onto their plate and start picking through the leftovers.  At the bottom of this post are 2 videos of sparrows caught in the act. 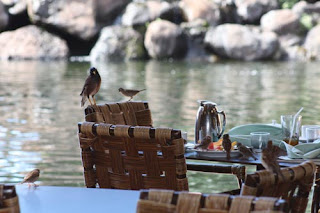 Myna birds fight their way through all the sparrows to get at your plate.  One of these birds can clear your plate faster than a whole team of sparrows.  In the video at the bottom of this post you can see a myna easily steal the majority of a plate of eggs. 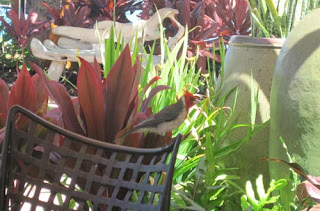 This is the prettiest and politest of the breakfast thieves.  They were not as bold as the sparrows and myna and we only spotted them near the tables outside. 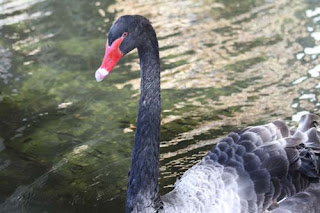 The name of the breakfast area was called Swan Court. The swans kept watch in the water just a few steps away from some of the tables.  There wasn't much preventing them from coming over to join you for breakfast. 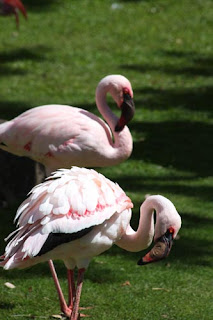 On the lawn just behind Swan Court is where the flamingos spend their day.  Flamingos tend to prefer things like shrimp, which makes them more fond of the dinner menu than the breakfast one.  Be careful as you don't want to be the first to discover that they also love hash browns. 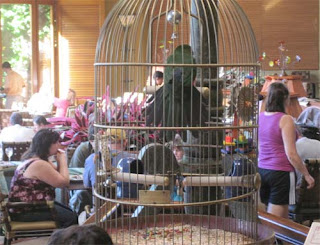 This parrot was standing guard at the entrance to the buffet.  Unfortunately, he was in a cage so he couldn't just go over and make himself a plate.  The closest he came to tasting breakfast was nipping at the sticky fingers that children stuck into his cage. 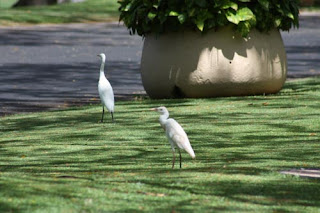 These egrets were always walking about on the front grounds of the hotel.  They were brought to Hawaii because of their habit of following cattle around and eating all of the bugs around them.  We were not bothered by any bugs while eating our breakfast.  Did this mean that some egrets were nearby possibly eyeing one of our nice desserts? 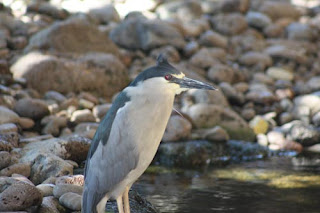 This heron stood very still by the waters edge during our meal.  This is how they hunt for food.  When an unsuspecting fish swims by they strike.  We wondered what might happen if we floated out a plate of buttered toast and jam? 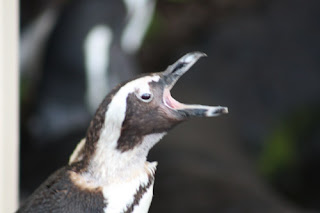 The hotel has many birds in it's lobby, one of which is the African Penguin.  While the penguins have a regularly scheduled feeding time, you never know when one might feel like enjoying an early morning snack.  The penguins tend to follow each other around so if one escaped and headed to the buffet you can bet that one or two more would be right behind it.

10) Nene
The Nene is the official Hawaiian Goose.  It is a cousin of the Canadian Goose.  While it is not impossible that a Nene might steal your breakfast, they are a very rare bird.  One of us spotted a Nene briefly as our tour bus hurtled down the side of Haleakala.  We wish one day to have a closer encounter with one of these birds.  So next time we are in Maui this is an open invitation to all the Nene.  Feel free to try and steal our breakfast!

Below are 2 videos of sparrows enjoying blueberry muffins and a Myna flying away with a mouthful of egg.