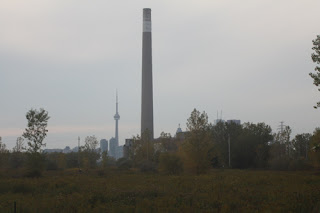 From several places around Toronto you can spot a rather large structure.  No, this is not the city's famous CN Tower.  Just in front of the Leslie Spit, the R. L. Hearn Generating Station sits relatively unobstructed.  At 705 feet tall, it's chimney is the 3rd tallest in Canada   That is over 64 stories high.  It still has a long way to go to beat the Inco Superstack in Sudbury, Ontario which is over 1200 feet and is the second tallest chimney in the world.  In case you were wondering a power station in Kazakhstan has the world's tallest chimney at just under 1400 feet. 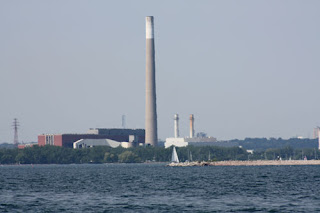 The R. L. Hearn Generating Station was built to meet Toronto's power needs.  It was named after Toronto engineer Richard Lankaster Hearn.  The building was originally a coal powered station and eventually became a natural gas powered station up until it was finally closed in 1983.  The huge chimney was built in the early 70s to try and reduce the smog output.  Since its closure the location is occasionally used as a venue for events such as Luminato in June 2014 and 2015.  Right next door, the much smaller Portlands Energy Centre (building with 2 small chimneys above) currently helps generate some of the power needed to keep Toronto going. 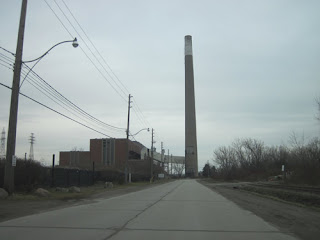 While the chimney has made its way into many of our photographs, we decided it was time to give the building a closer look.  So we took a drive down to Toronto's Portlands.  This area is also home to Cherry Beach, the Leslie Spit, Polson Pier and Pinewood Toronto Studios. 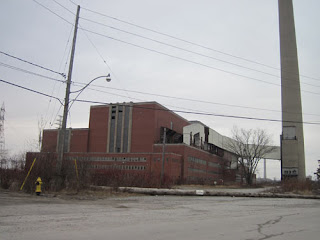 In 1983 the movie Strange Brew was released.  The Hearn Generating Station was used as the Elsinore Brewery exterior in that film.  Since the station also shut down in 1983, this would have saved them from countless Bob & Doug McKenzie fans showing up and claiming to have found a mouse in their beer.