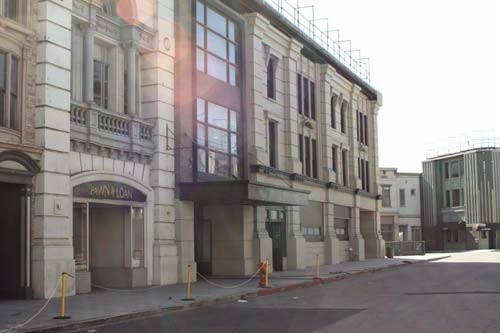 In Gremlins 2 there are all sorts of gremlins loose in a science lab.  The poor Futtermans, who surprisingly survived the first movie, are in New York visiting Billy & Kate.  Once again they find themselves in a situation with one of the creatures.  As a result of one gremlin becoming mixed with a bat and some genetic sunblock it flies out into the city.  The Futtermans are standing in front of  the Cathedral of Saint Eva Marie when it swoops down from the sky.  The joke here is that Eva Marie Saint is an Academy Award winning actress for her work in On The Waterfront. 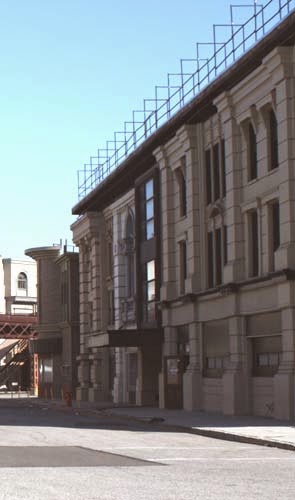 This scene was filmed on New York Street at Warner Brothers Studios.  The gremlin flies down and attacks Mr. Futterman in front of A Taste Of Greece restaurant.  This was located just to the right of the awning in the photo above.  He struggles with the gremlin as they move down the sidewalk past two big store windows.  He finally manages to get the better of the gremlin and dunks him into some freshly poured concrete.  This happens at the end of the block in front of the entrance to the building below and just behind the pillar on the left.  The gremlin gets covered in concrete but still manages to fly up and land back on the church before the concrete finally hardens and he becomes a permanent gargoyle.  Concrete?  Reviewing our gremlin rules we know that you never want to get them wet or they will multiply.  We also know that concrete is a mixture of water and cement.  This scene could have ended quite differently. 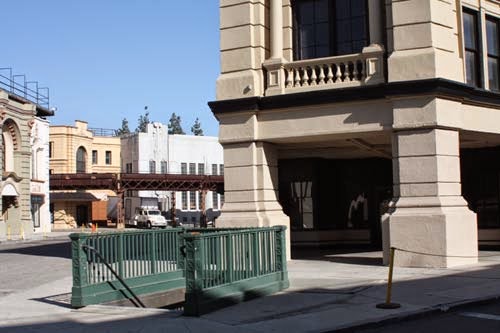 The front of this building may already be familiar to fans of Lois & Clark: The New Adventures of Superman.  It served as the Daily Planet newspaper building, but in the picture above it is missing it's giant metal globe.  The stars of the show were a pre-Desperate Housewives Teri Hatcher as Lois and Dean Cain as Superman.