Back To The Future Day 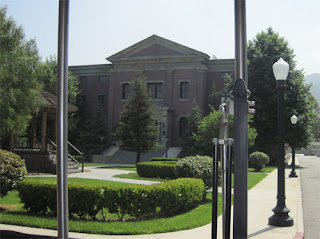 When Marty McFly went into the future he chose the date of October 21st 2015.  He arrived in a world of hoverboards and flying cars as part of the imagined future of Back To The Future II.  By the time you are reading this post that date may have already arrived.  The future is here!  When we visited Universal Studios some 27 years after the first movie, part of our plan was to go back to where Back To The Future was filmed.
Courthouse Square on the Universal Studios back lot is where most of the action takes place.  To visit this area you need to take the studio's popular tram tour.  As we walked through the park heading to our tour we noticed Doc Brown's Chicken which has nothing to do with the movies except that it uses the character of Dr. Emmett Brown. 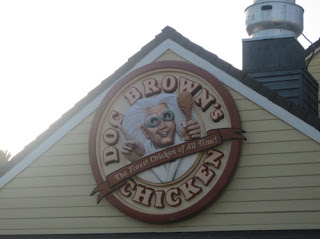 What we really wanted to see was the square from the first movie of the trilogy.  In the movie, Marty McFly (Michael J. Fox) time travels from 1985 back to the year 1955.  The square is changed to reflect the town of Hill Valley in both of those years.  In the sequel, Back To The Future II, he goes forward 30 years to the year 2015 and the town has changed again. Unfortunately, Universal has also undergone some changes and many of the buildings are not the same as they were during filming in the 1980s.  Some were changed on purpose and others were lost during a fire in 2008.  Anyways, on with the tour! 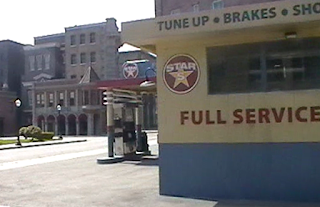 As the tram rounded the first corner and entered the square there was a gas station on our right.  We remember the Texaco gas station from the movie, but this is not it.  If it is the same gas station it is no longer where it used to be. This gas station is actually standing where Lou's Cafe was in 1955 and where the gymnastics studio was in 1985.  It was inside Lou's Cafe where Marty encounters his father George for the first time.  In the sequel when Marty goes to the year 2015 it has become a cafe again.  It has become a retro cafe called Cafe 80's.  Across the courtyard in the picture above you can see a little pointed rooftop.  This was a movie theatre and in 2015 it was playing Jaws 19. 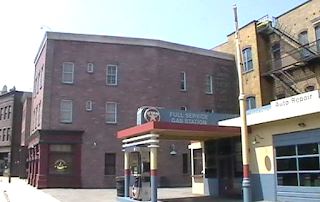 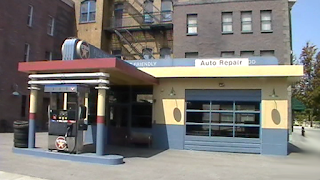 Since we were busy filming the gas station we missed out on getting a picture of one of the most important streets. Once we realized the courthouse was behind us we turned around, but it was too late.  The street on the left side of the courthouse is where Marty speeds down trying to reach 88 miles per hour at the exact moment a bolt of lightning hits the town clock tower.  You can see a tiny bit of the street where he enters the square on the right hand side of the picture above.  You can also see a tiny bit of the buildings and street on the left hand side of the picture below.  This part of the street would be where Doc had hung wires across hoping to harness the lightning's power.  Sadly, the end of this street was lost in the 2008 studio fire.  That means there is no longer another movie theatre down there for Marty to crash into after returning to the present, or for a theatre full of gremlins to enjoy a showing of Snow White. 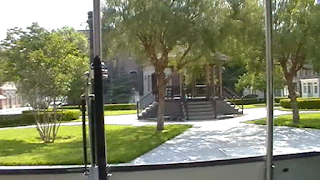 At the top of this post is a picture of the courthouse as it looked when we visited.  It is not looking quite the same as it was in the Back To The Future movies and the clock was missing.  Still it was nice to go back in time and visit a place where one of our favourite movies was created.  We wish we could go back in time and get a better picture of the DeLorean DMC-12  below. Who knows? Maybe tomorrow someone will invent a time machine or hoverboards or flying cars, or maybe they are still 30 years away in an unknown future. 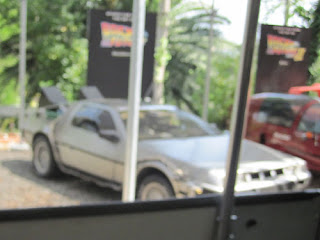