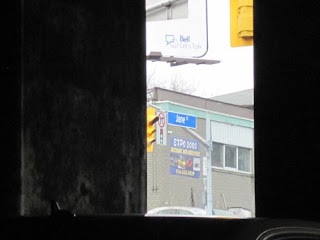 
The girl works at the store sweet Jane St. Clair.

The girl in the Barenaked Ladies song Jane was named after an intersection in Toronto.  The song was co-written by Barenaked Lady Steven Page and British musician Stephen Duffy.  Stephen Duffy is best know for his mid 80s hit Kiss Me which he recorded as Stephen 'Tin Tin' Duffy.  Supposedly, Stephen spotted Jane Street and St. Clair Avenue on a map and remarked that it must be a beautiful intersection. 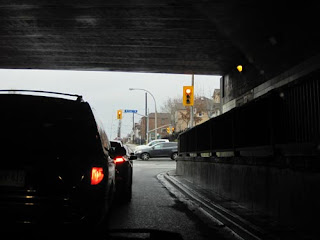 As we were driving around Toronto we realized that our path was going to take us to this very spot.  We turned onto Jane Street and headed north.  We headed into the tunnel that goes under the railway tracks and then the intersection opened up in front of us.  We snapped a few photos through the window of the car and turned right onto St. Clair Avenue West.   There was nothing particularly special about this area.  There was an interesting home on the north-east corner that looked a bit like a castle.  We imagine this is where Jane would live if she really existed. 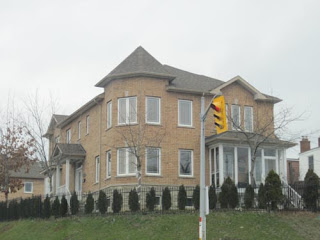 In reality Jane Street was named after Jane Barr. Her husband was a real estate developer in the area and named the street after his wife.  He also named some other streets after his children.  Nearby Annette Street is possibly one of these.  St. Clair Avenue gets its name from a misspelling of Augustine St. Clare.  He is a character from the novel Uncle Tom's Cabin. 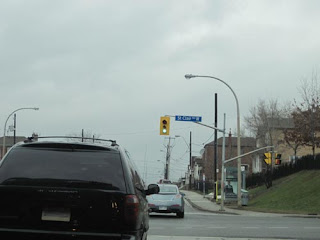 Barenaked Ladies fans may want to visit this intersection just for fun and see the location that inspired one of their best known songs.  If we can make one suggestion about visiting, it is the same as the album title that the song Jane is from... Maybe You Should Drive.