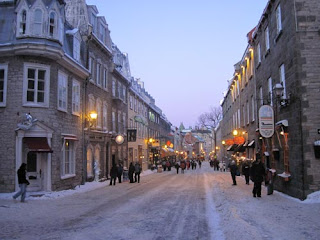 Quebec City in the winter is cold.  We arrived at the end of January and we were thinking it must have been somewhere in the -40 C range.  We could be wrong, but it is normal for Quebec City to have low temperatures at this time of year.  Temperatures lower than -20 C are not unusual.  Add some wind chill to that and there you go.  To give you an idea of how cold it was as soon as you went outside your eyelashes would freeze together from the moisture from your eyes.  If you had a bit of a runny nose as soon as you took that first breath your nostrils would freeze solid and you would have to resort to mouth breathing.  This was best done through several layers of a carefully wrapped scarf.  We were ready for the weather and had on thermal long underwear, thick clothing, thick socks and minimal exposed skin.  We braced ourselves as we stepped out of the doors of Chateau Frontenac and headed into the frozen city. 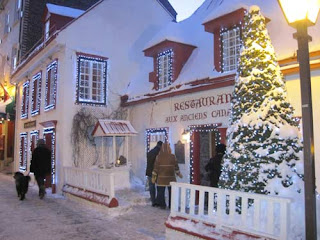 We were headed to Quebec's Winter Carnival and our route took us down one of the oldest streets in Quebec City.  Rue Saint Louis has been around since the 1600s.  It stands to reason that one of the oldest streets would have the oldest house in Quebec City.  Maison Jacquet was built in about 1676 and is still standing to this day.  The restaurant Aux Anciens Canadiens moved into this building almost 300 years later in 1966. 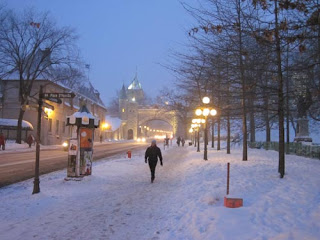 As you head further west you leave the rows of shops and restaurants behind and head towards what looks like a castle.  This is the Porte Saint Louis and is one of the city gates.  It is part of a wall that surrounds the city and attaches to the military fort La Citadelle de Quebec.  We headed under the pedestrian archway and continued our journey beyond the city walls. 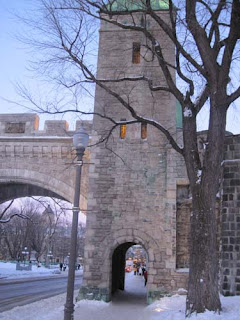 If it was possible, it seemed even colder at this point. We had almost reached our destination.  A bust of Gandhi braved the elements just outside of Bonhomme's Castle. 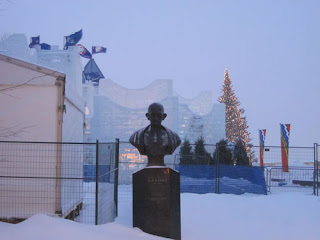 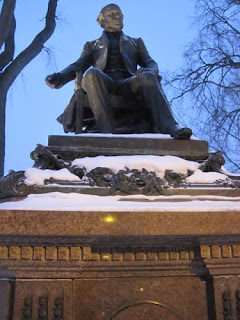 A short distance from Gandhi was a monument to François-Xavier Garneau.  He was a French Canadian poet and civil servant who wrote the history book, Histoire du Canada.  Just a little further past Francois and we had reached the Plains of Abraham where Carnaval was set up.  A horse drawn carriage went by close to the Quebec Parliament building. 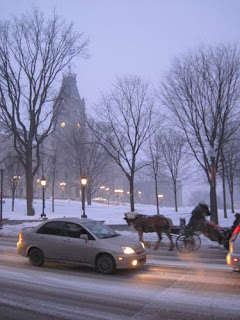 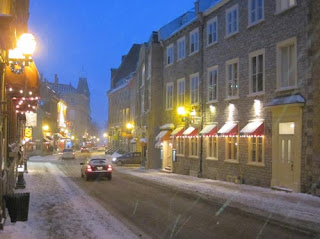 After enjoying ourselves at Carnaval it was time to make the return trip to our hotel.  On the way back it was darker and some snow began to fall.  We stopped and enjoyed a much needed hot meal at the restaurant Aux Anciens Canadiens we had passed earlier.  We enjoyed both the decor and our dinner.  Some french onion soup at the beginning of the meal was the perfect thing to start the defrosting process.  When we stepped outside again, the street lights seemed to glow a little brighter and the snow twinkled in the light.  Despite the bitter cold we walked along Rue Saint Louis towards Chateau Frontenac feeling warm inside. 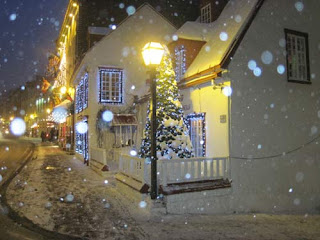 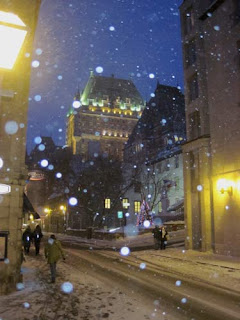