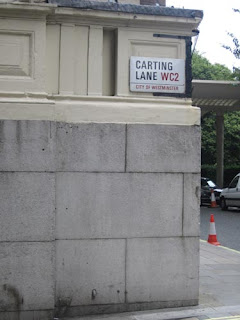 Carting Lane is just a small street, but it is an area of important firsts and lasts in London's history.  On the north end it can only be accessed by pedestrians via a stairway.  On the east stands the Savoy Theatre which opened in 1881 and is also the first public building in the world to be lit throughout with electricity.  The theatre also became famous for presenting the operas of Gilbert & Sullivan.  The opera Patience was the first to appear at the Savoy, but perhaps the best known is The Pirates of Penzance. 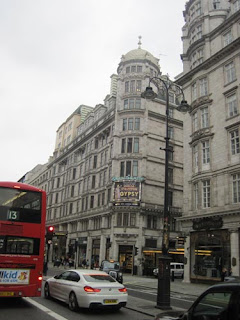 As you head south towards the Thames you will see a single lamp standing on the west side of the lane.  A small plaque next to the lamp lets us know that this is the last remaining sewer gas destructor lamp in the City of Westminster.  The City of Westminster includes a large part of central London.  Both the Queen's residence at Buckingham Palace, along with Big Ben and parliament can be found in Westminster.  More obviously this is also where the famous Westminster Abbey can be found. 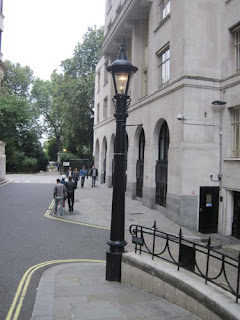 This cast iron lamp was installed as part of the Victoria Embankment sewer system which opened in 1870.  It is this lamp that gives Carting Lane its oh so clever nickname.  One can only imagine what London smelled like at the end of the 1800s and this lamp was doing its part to help reduce that smell.   The lantern is designed to take the biogas that emits from the sewer system and burn it off.  We visited in the mid-afternoon and as you can see the lamp burns 24 hours a day.  We were also pleased to report that this lane did not smell any different than any of the others we had walked through earlier that day. 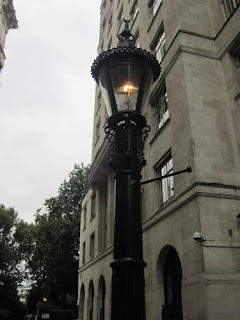