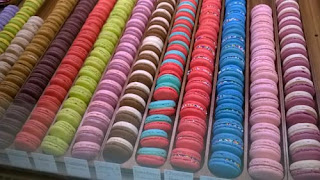 We arrived at the corner of King & Spadina just before the tour departure time.  There were a few other people milling about.  A couple of  minutes later a girl revealed herself to be our tour guide and off we went.  We were going on a chocolate walking tour of Toronto and we were ready to sample some of the best that each location had to offer. 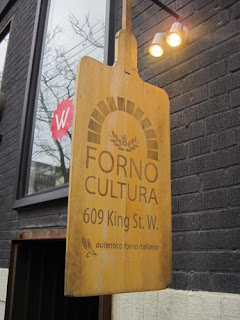 Forno Cultura
Address:  609 King Street West, Toronto, ON
Website: fornocultura.com
Our first stop was to sample some chocolate olive cake.  There was a contrast between the sweet chocolate and the olive that was quite pleasing.  The bakery also had racks of fresh bread as well as pizza that looked like something to try on a return visit.  Right now it was all about the chocolate. 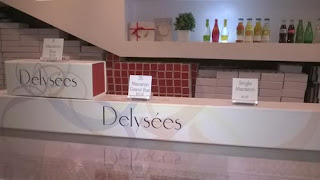 Delysèes
Address:  780 King St W, Toronto, ON
Website: delysees.com
Delysees was the location that appealed to us the most with rows of colourful macarons and other carefully decorated desserts.  We were allowed to choose which macarons to taste from the display.  We also tried a small cheese and egg croissant sandwich that called out to us.  We left Delysees and headed further west and then turned up to Queen Street for our next location. 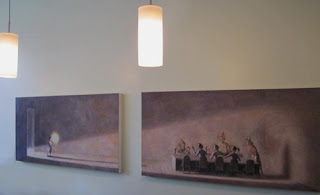 Dufflet
Address:  787 Queen St W, Toronto, ON
Website: www.dufflet.com
At Dufflet we were given some brownies to eat.  We were familiar with Dufflet as their cakes can be found in many Toronto grocery stores.  The Queen Street West store has been here since 1982.  After finishing the brownies we were starting to feel full. 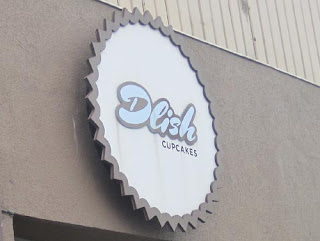 Dlish
Address:  833 Queen St W, Toronto, ON
Website: www.dlishcupcakes.com
We had passed Dlish on our way to Dufflet so now we doubled back.  We were offered to either have a cupcake now or to have it packed for later.  These were rather large cupcakes so we had a marshmallow cupcake and a salted caramel cupcake put into a little carrying case to take with us. 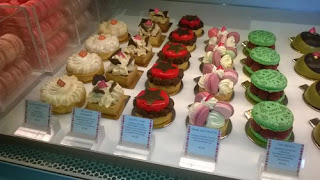 Nadege Patisserie
Address:  780 Queen Street West, Toronto, ON
Website: www.nadege-patisserie.com
The last stop was Nadege.  This shop is owned by a fourth generation pastry chef, Nadege Nourian.  Here we were treated to a small dark chocolate.  They seemed to know they were the last stop on the tour and they didn't want anyone exploding on them.  They also had some beautifully crafted desserts in their display case.  It seems there is some competition between Nadege and Delysees as to who has the best macarons.  We plan to return and do some blind taste testing to determine which is our favourite. 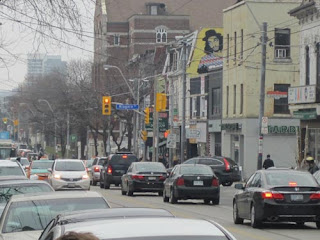 As we walked along our tour guide had quizzed us on how much chocolate it takes to kill a person.   This lead to questions such as "Is it being dropped on top of them?"  The tour guide clarified.  It turns out that a person would have to eat about 22 lbs of chocolate in one sitting for it to kill them.  While we did have quite a bit of chocolate on the tour, we were nowhere close to that limit.  After the tour we even took a chance and found a quiet place to sit and polish off those Dlish cupcakes.