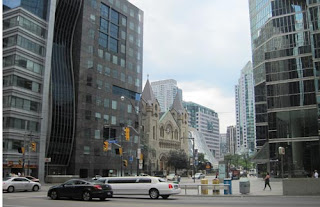 Johnny 5 was attacked beside St Andrew's Church in Toronto.  "Who's Johnny?" you might ask.  Number 5 is a military robot who was hit by lightning and went against his programming and started to make his own decisions and develop his own personality.  He is always on a quest for more input.  Number 5 is the much loved star of the movie Short Circuit and its sequel Short Circuit 2.  At the end of the first movie he decided he should be called Johnny 5.
You might also ask "What about St, Andrew's?"  St. Andrew's Church has been on this Toronto corner since 1876.  According to their website, there used to be Government House on the corner across from the church.  A college on the other corner and finally a tavern on the last corner.  These four corners were known as Legislation, Education, Damnation and Salvation.  Currently, St. Andrews is right across the street from the popular Roy Thomson Hall.
In Short Circuit 2, Johnny is attacked by Oscar and two other thugs.  Oscar is played by Jack Weston who some may recognize as one of the men harassing Audrey Hepburn in the movie Wait Until Dark.  First you pick on legendary actress Audrey Hepburn and then over 20 years later you attack one of the greatest on-screen robots of all time?  Shame!  We have walked past this crime scene many times, but this time we stopped to take a few pictures. 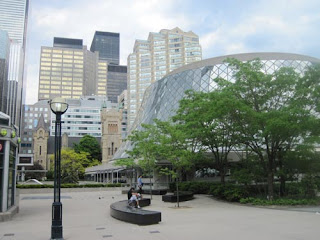 The scene starts with Johnny 5 passing Roy Thomson Hall headed towards the church.  You can see the church in the left of the picture above.  Some kids are flying model airplanes in what used to be an empty lot. 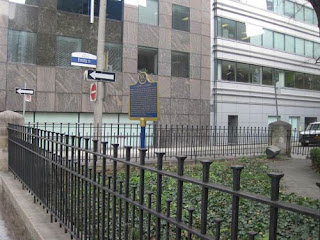 He is pursued past St. Andrew's and turns onto Emily Street.  When the thugs chasing him enter the street he has disappeared. 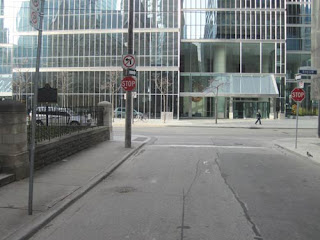 Oscar comes around the corner and Johnny 5 drops out of the tree below and grabs him.  One thing we noticed about this area is that some of the fencing and one of the pillars has been removed from in front of the tree in order to allow direct access to the church's side entrance. 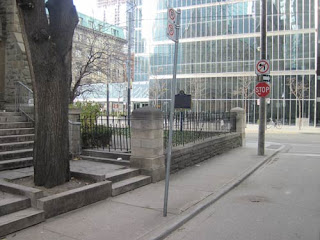 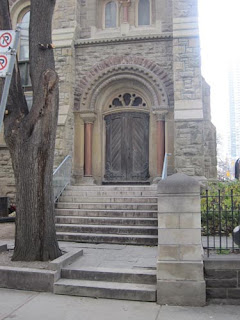 Despite Johnny 5's massive intake of input he has yet to master pig latin.  Oscar says "Etgay ehindbay imhay" and Johnny does not understand.  The thugs pretend to run away, but sneak around behind Number 5 and he is attacked with an axe and a crowbar.  Oscar encourages the thugs to finish Johnny off. 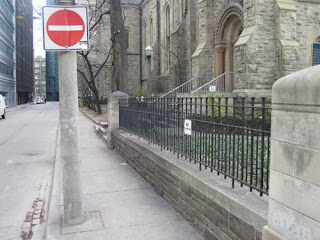 Johnny manages to send out a signal and commandeer some of the nearby radio controlled airplanes.   A plane rounds the corner at Wellington Street, does a quick loop at King Street West and gives one of the thugs a reason to prefer standing for a few days.  Despite the violent attack, Johnny 5 is still alive.  He only has a short time to total memory failure so he pulls himself up using the fence, collects his pieces and heads south on Emily Street. 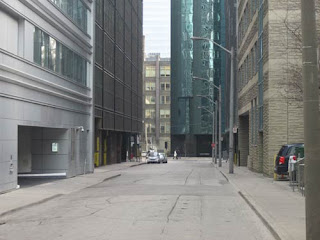 Johnny steals a DieHard car battery from a vehicle parked behind the church and this gives him some energy to carry on.  He is still in critical danger until he breaks into a Radio Shack store and finally gets repaired properly.  Thank goodness Johnny 5 is alive.  After all the events that took place, we think that everyone, including Johnny 5, should find out what time they hear confessions at St. Andrew's.