Christmas Windows At The Bay 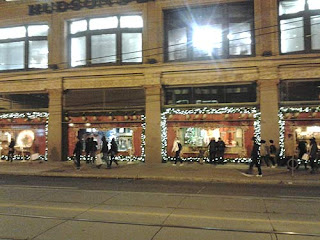 The building at the corner of Yonge Street & Queen Street West has been there since 1896.  It was a Simpsons department store up until more recently when it became a Hudson's Bay store.  The Hudson's Bay Company has been in business since 1670, so between the building and the tenants there is a lot of history here.  A long standing tradition is the Christmas windows.  Simpsons used to decorate its front windows each year and now The Bay has continued the tradition.  As the holidays approach, everyone would gather in front of the windows on Queen Street to admire the displays inside.  Usually the windows are decorated in November and stay up until the end of the year.  Due to its popularity, The Bay has had the same windows for a number of years with animated figures showing everyone preparing for Christmas. 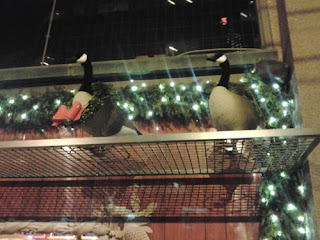 One thing we noticed this year was some Canada geese sitting outside above the windows.  Some of them were wearing ribbons or wreaths.  We don't recall them being there in previous visits.  Below are a few highlights from the windows. 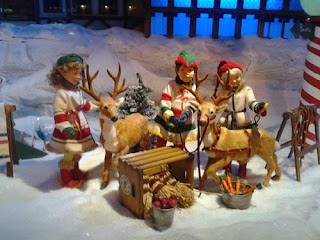 Elves feed and prepare the reindeer for Santa's big flight.  The Bay has been selling point blankets for centuries.  The multistripe point coats worn by these elves have also had a long history.  They are traditional First Nation designs and products. Through the years, the green, red , yellow and blue stripes on a white coat or blanket have become a trademark of the Hudson's Bay Company. 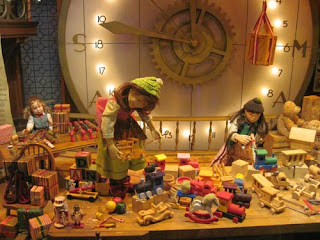 A big Christmas countdown clock counts down to Christmas Eve as the elves are busy preparing gifts and Santa Claus checks his list. Twice. 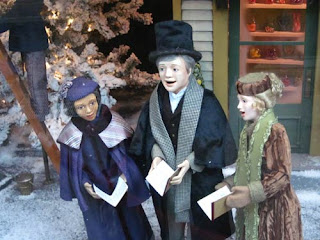 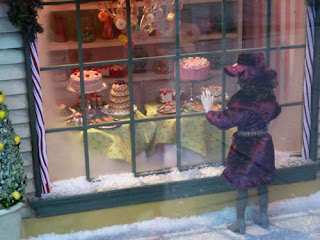 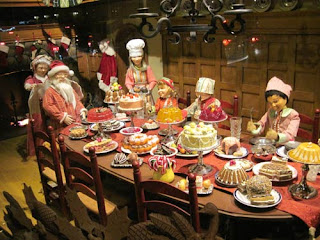 The last window shows Santa enjoying a feast after he has finished delivering toys to girls and boys all around the world.  Some of the elves bang their knives and forks on the table as they are eager to start eating.  Make sure you view the windows from east to west to get the story in the correct order.  If you came from Nathan Phillips Square and this is the first window you are seeing then keep heading further along.  There are only about five windows in the whole display.
Downtown Toronto always does a great job of decorating for Christmas and the windows at The Bay are a big part of that.  It is always nice to take a break and watch the windows from the street before cramming back into the Eaton Centre with all the other Christmas shoppers.

Christmas Windows At The Bay
Post # 86
Posted by On Vacation at 12:30:00 am
Email ThisBlogThis!Share to TwitterShare to FacebookShare to Pinterest
Labels: Canada, Christmas, Ontario, Performances, Queen(TTC), Structures, Toronto
Location: The Bay Queen Street, Toronto, ON, Canada