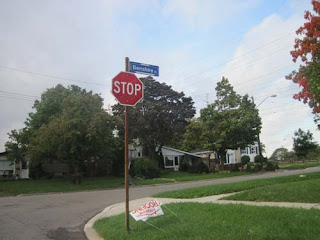 There is an area of Scarborough, Ontario that is known as Bendale.  Inside that area is a group of streets that all start with "Ben".  In fact there are 15 streets that start with "Ben".  These streets are tucked in between McCowan Road on the west, Bellamy Road on the east and Lawrence Avenue to the south. This area has become affectionately known as The Ben Jungle.  We decided one day that we would explore the deepest, darkest corners of this so called jungle. 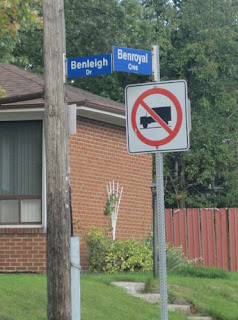 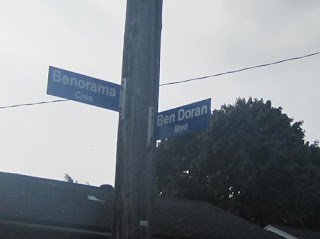 We turned onto Benorama Crescent and then found ourselves on Ben Doran Boulevard.  Benorama sounds like it was named by Rob Schneider's Photo Copy Guy character from Saturday Night Live.  Ben!  Benny! Benorama! Makin' copies! 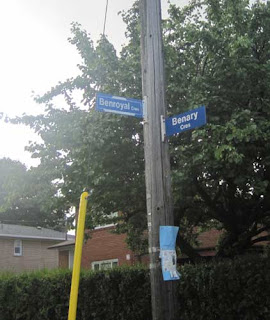 Next we were on Benary Crescent.  We think that this street name should be pronounced like canary.  There was a lost dog poster on a pole as we came across Benroyal Crescent again and we started to wonder if we were headed in circles.  We hoped there would be no missing posters put up for us in the near future. 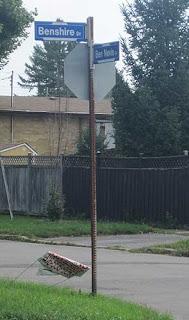 We turned onto a street called Benshire Drive.  A shire, according to The Lord of the Rings books, is a place where Hobbits live in Middle-earth.  Next we passed Ben Nevis Drive and wondered why some "Ben" streets were written as two words while others were mashed into one.  Looking online afterwards we determined that Ben Nevis is the highest mountain in the British Isles and is located in Scotland.  Also located in Scotland is the Ben Doran Guest House.  It would be very interesting if someone who grew up in Scarborough started a Bed & Breakfast in Edinburgh, Scotland and named it after their old street. 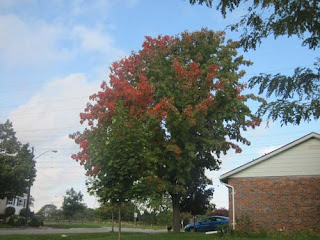 There was one tree that was changing colour for the fall.  We continued on along Benshire which then took us through the hydro field. 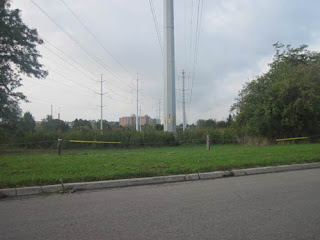 We have determined that this is one of the roads where the Barenaked Ladies filmed their Lovers in a Dangerous Time video. 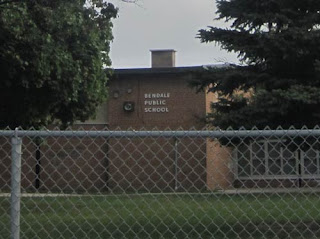 We reached Bendale Public School and saw our first non "Ben" street name.  Across from the school was a road called Bellchasse Street. While the street did start with "B", we knew we had gone too far north. There is also a North Bendale Public School, but it is not located in the jungle.  We turned around and drove until once again we were surrounded by "Bens". 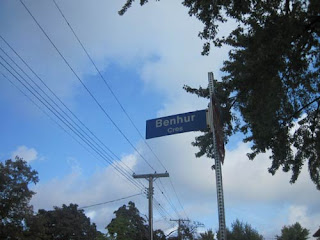 The next street we encountered was Benhur Crescent.  Ben-Hur was a famous film starring Charleton Heston and known for its climactic chariot race scene.  Again, we are not sure why it appears as one word in the Ben Jungle. 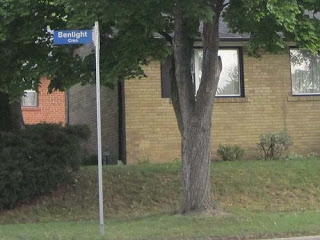 At Benlight Crescent we turned around again and headed in a southern direction until we hit Ben Alder Drive. 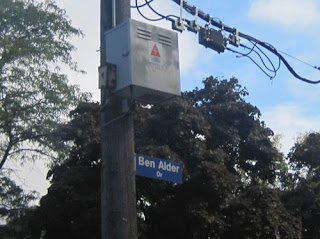 Ben Alder is another mountain range in Scotland.  Some of these names are starting to make sense. 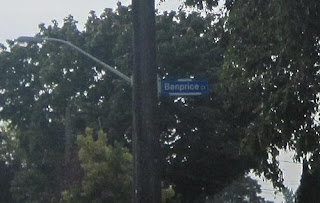 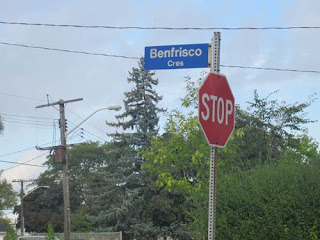 We drove further south through the jungle and passed Benprice Court and Benfrisco Crescent. 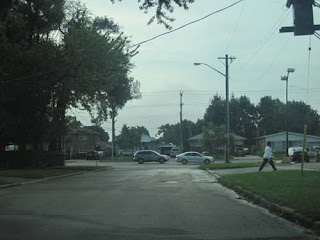 And then we saw it.  A way to escape the jungle.  We had made it! 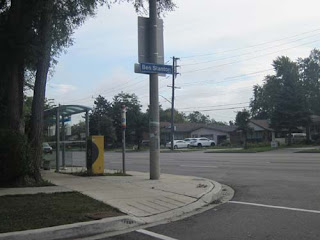 We had arrived at the corner of  Ben Stanton Boulevard and Lawrence Avenue East.  Who knows how long we had ben gone? We checked our map and realized we had only visited 13 streets.  We had no choice but to head back into the jungle once more as somehow we had missed two small courts. 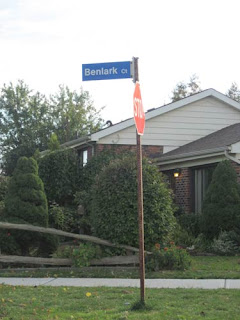 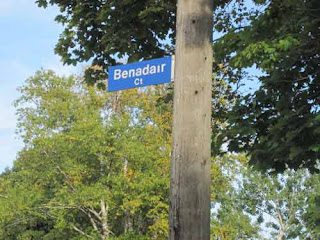 After one more drive along Benleigh Drive we located Benadair Court and Benlark Court.  Now our mission was finally complete.  We had quite an adventure in the Ben Jungle.  You won't realize how much fun it can be until you have ben for yourself. 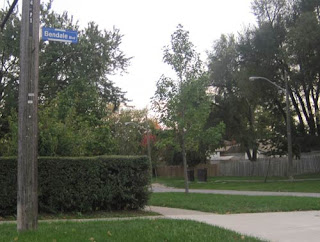 There is one more street which is related but for some reason not connected to the rest of the jungle.  South of  Lawrence Avenue and Danforth Road,  Seminole Avenue becomes Bendale Boulevard if you follow Seminole eastward..

Also for those of you that prefer a travel guide before venturing into the jungle, here it is.  The fastest way to travel through the Ben Jungle without missing a single "Ben".

Enter the jungle from Benleigh Dr. at McCowan Road.  Drive past Benroyal Cres. Turn left onto Benorama Cres.  Look right before you turn or you will miss Benadair Ct. Turn left onto Ben Doran Blvd. then right onto Benary Cres.  Make a right turn on Benshire Dr. then go left on Benleigh Dr. Continue past Ben Nevis Dr. and at the intersection of Benlight Cres. and Benlark Ct. turn left.  Turn around in the court and then turn right at Benleigh Dr.  Head past Benhur Cres. and turn at Ben Alder Dr.  Turn right at Ben Stanton Blvd.  You will drive past Benprice Ct. and Benfrisco Cres. before finally escaping the jungle at Lawrence Ave. East.

The Ben Jungle
Post # 140
Posted by On Vacation at 12:30:00 am
Email ThisBlogThis!Share to TwitterShare to FacebookShare to Pinterest
Labels: Canada, Ontario, Structures, Toronto
Location: Benleigh Dr, Scarborough, ON, Canada