A Night In The Ice Hotel (Hotel de Glace) 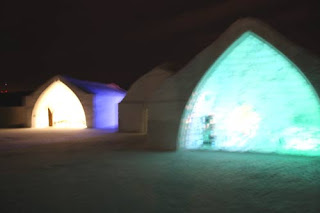 The Hotel de Glace or The Ice Hotel is located just north of Quebec City.  It is built out of snow and ice each December and tourists come to admire the beautifully carved rooms.  We blogged about these in a previous post.  Guests can start spending the night in January.  We spent a night in early February 2010. 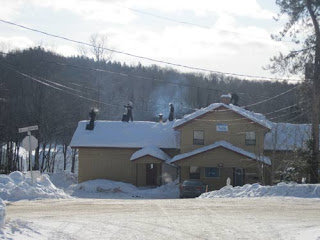 Quebec gets a lot of snow and gets very cold.  There was so much snow that a team of shovellers had to go to work clearing the roof of a nearby lodge.  As far as the cold, outside of the hotel it often drops below -25 Celcius.  Inside the hotel it is around -5 Celcius.  To spend a night here is a bit of a challenge. 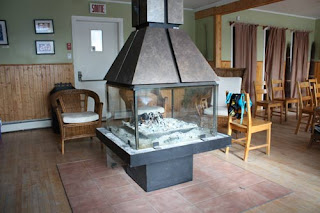 Just in case you need some real warming up, there is a lodge next to the Ice Hotel.  It is a regular structure with normal temperatures inside.  This is where we had lockers to keep our luggage, clothes  and toiletries  We also had trouble sleeping and visited this area a few times during the night. 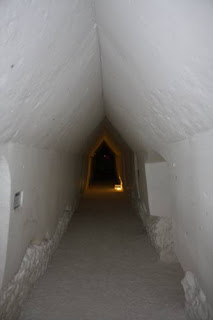 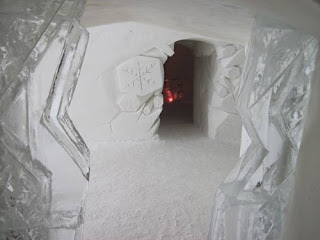 Our room was not one of the fancy rooms with carved sculptures inside, but a simple space for us to sleep.   The room was located down one of the long snowy hallways that got even harder to navigate in the middle of the night. 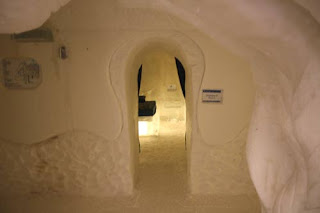 The doorway is just a curtain which is part of the reason you keep your belongings in the lodge.   The bed is made from ice and wood and then covered with a fur. 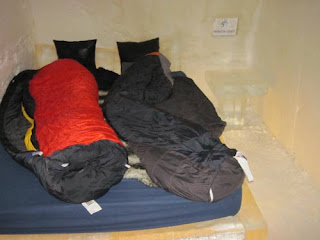 Aside from wearing thermal undergarments we were also given our special sleeping bags.  They were designed to keep you warm in extreme temperatures.  They had a double layer and a zipper inside so you could zip yourself up like you were in a cocoon.  They would cover over part of your face and then there was a hood to pull over your head to reduce skin exposure.  The only issue for one of us was that the biggest bag they had was still a little too short.  Any sort of kicking or stretching while you were sleeping and it would pull tight on the hood and you would wake up in a panic.  Fortunately you could unzip quickly to finish the stretch, but it made for a long night. 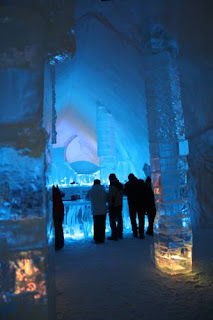 The best part about spending the night in the Hotel de Glace was that once the busloads of tourists left we had the place pretty much to ourselves.  We headed to the Ice Bar. 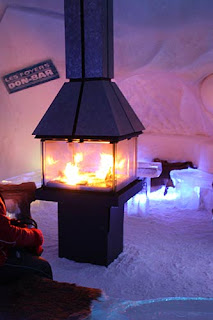 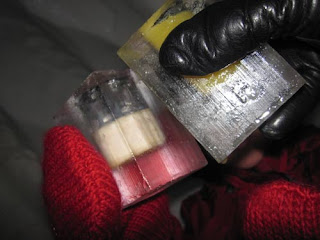 At the bar you could get a drink inside a glass made of ice.  We enjoyed a few of these and when we were done the bartender just threw them behind the bar.  The ice was specially formed so it would not stick to your face.  It did melt a bit as you sipped your beverage while dancing to the DJ.  The glasses also did some neat tricks when we slid them across the tables made of... what else but ice. 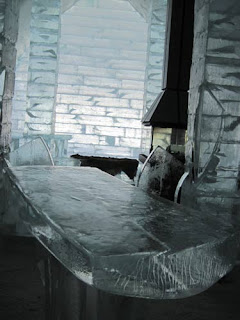 Eventually even the bar had to close.  We went and did some more night time exploring. 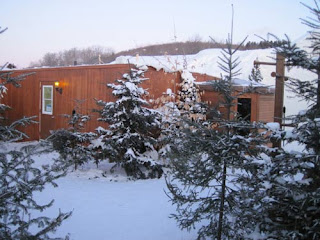 In a small open section there were washrooms and change rooms located in a small building.   We made a few visits here in the night due to the combination of the cold and the time spent at the bar earlier. 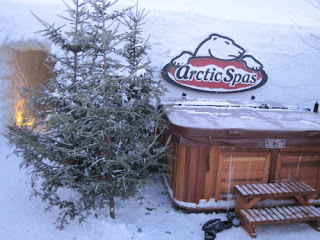 If you were really brave you could run to one of the hot tubs and sit out under the stars.  We didn't see anyone brave enough to go for a dip that evening. 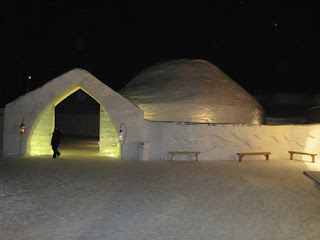 Aside from a few drunken people that mumbled something at us, the only other person around in the middle of the night was a security guard near the main gate. 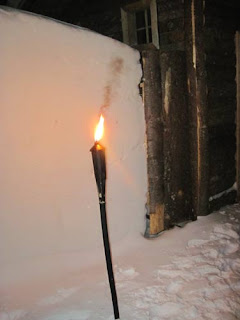 There were torches allowing us to find our way back into the hallways that would lead us to our room once more. 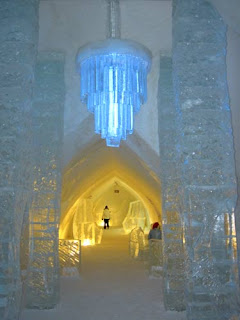 Eventually morning arrived and we packed up our gear and left our fantasy castle of ice.  We had a once in a lifetime experience and some great stories to tell.  The Ice Hotel is beautiful, but we were planning to get a better night's sleep at the Chateau Frontenac that evening.