Please Look After This Bear 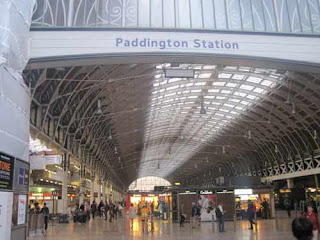 Michael Bond wrote A Bear Called Paddington in 1958.  In the book a bear was found at Paddington Station in London, England.  The bear was from Peru and loved marmalade.  He was very polite and wore a big hat and carried a suitcase.  He was found by the Brown family with a sign that said "Please look after this bear."  They decided to do just that. 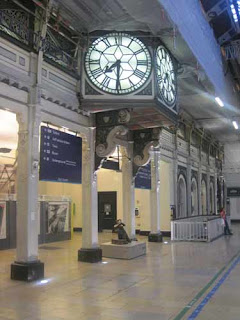 When we visited England in 2015 we also found a bear at Paddington Station.  He was bronze and wore a big hat and was seated on a suitcase.  He also had a sign that said "Please look after this bear." 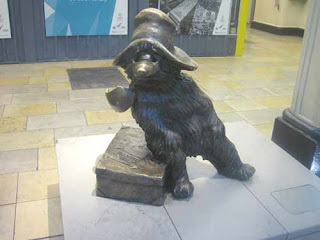 Paddington bear was named after the station where he was found.  He has appeared in many of Michael Bond's books through the years.  Paddington is much loved in England and around the world.  In 2000 this statue was placed at Paddington in his honour. 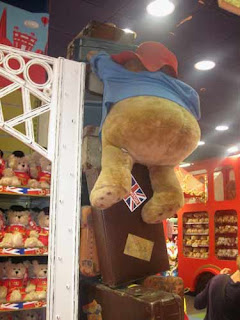 Paddington dolls are also very popular.  Paddington bear is known to innocently get into mischief.  The doll above was getting into some mischief in Hamley's toy store on Regent Street.  Hamley's is the oldest toy store in the world.

In 2014 a Paddington movie was made.  Paddington had already had a stop-motion television series that was popular in the 70's.  The new movie featured a computer generated bear.

To promote the film various Paddingtons were placed around London on what was called The Pawprint Trail.  This Paddington above is sort of a blue velvet looking one. 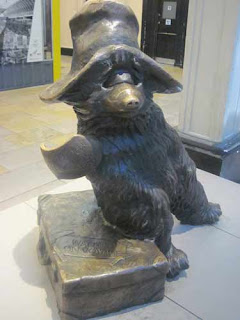 Paddington is such a sweet character and will be thought of fondly for many years to come.  We suggest if you ever find yourself at Paddington Station please look out for this bear. Thank you.