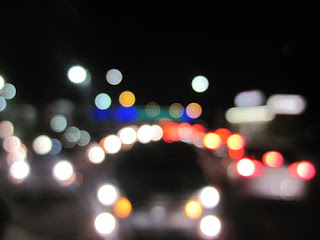 For twenty years the Holiday Train has travelled across Canada.  This year was no exception.  The train goes across the country to collect food and money for local food banks.  This year we went to catch the train to holiday cheer. 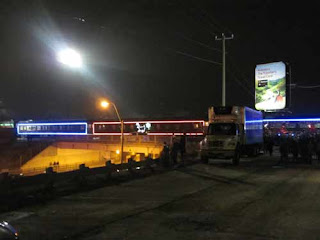 In Toronto the train stopped at Lambston Yard.  It blasted its horn as it crossed a bridge and entered the stockyards. 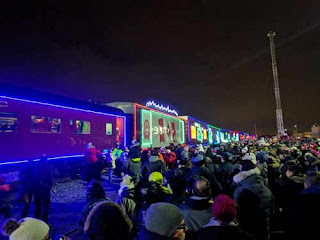 A large crowd had gathered to welcome its arrival.  The decorated train cars slowed to a stop. 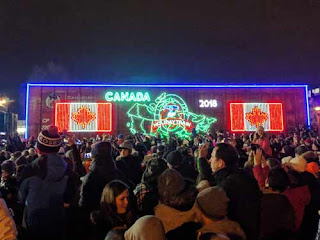 ​There are two trains in Canada.  One train leaves Montreal and travels down into the US and then makes its way back into Canada to stop in Weyburn, Saskatchewan. 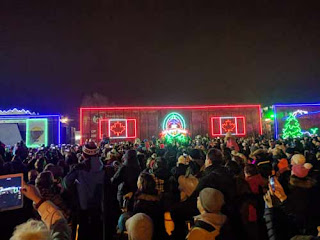 The other train leaves Montreal and travels west through Ontario, Manitoba, Saskatchewan and Alberta before arriving in Port Coquitlam, British Columbia . 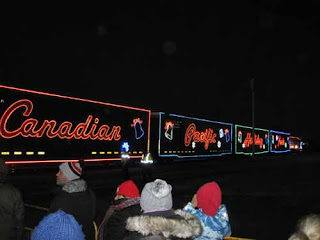 The train we saw in Toronto would finish its journey in BC about 20 days later.  Until then its flashing lights would shine across the country as it travels province to province. 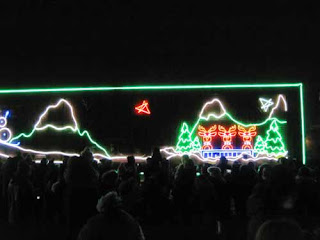 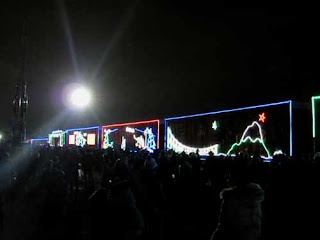 The train cars were all decorated in holiday lights with animated scenes depicting, reindeer, mountains and winter fun. 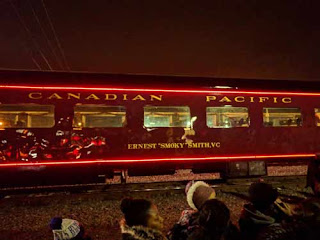 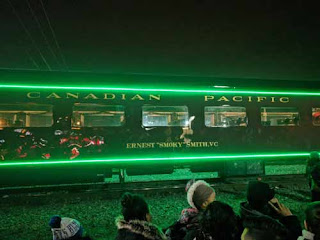 Ernest "Smoky" Smith was the last living Canadian recipient of the Victoria Cross.  The Victoria Cross is given for bravery in battle.  When Ernest died at the age of 91 a train car was named in his honour.  When the Holiday Train came to town his car was flashing green and red light. 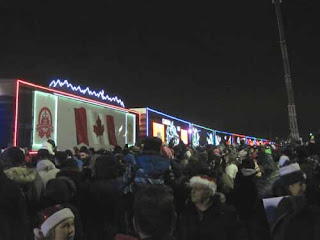 One train car had a large tarp with the Canadian flag on it.  As the crowd took photos of the colourful train, the tarp suddenly rolled up. 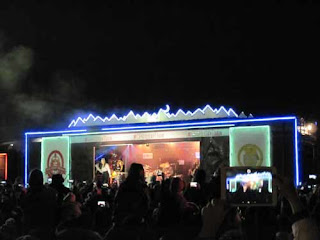 Inside was Canadian country music star Terri Clark ready to entertain the crowd with her songs as well as some Christmas classics.  Terri is from Medicine Hat., Alberta and a member of the Canadian Country Music Hall of Fame.  She would be performing at stops all across the country. 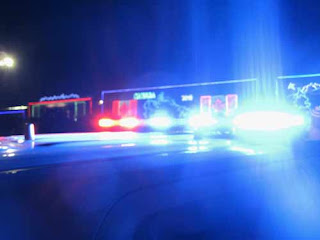 Even the police cars that were there for crowd control were lighting up the night. Their very bright red and blue lights flashed from the roof of their vehicles. 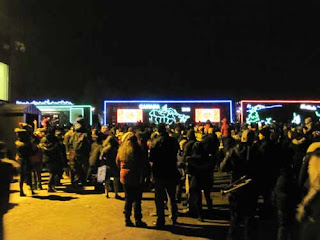 The Holiday Train was a nice start to the Holiday Season.  As we write this blog, it is still on track collecting food donations and spreading holiday cheer across the nation.
Map of Our World