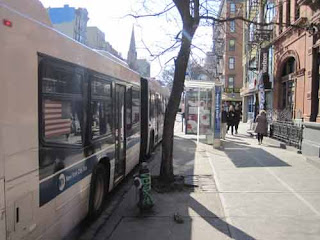 Daft Punk caught the world's attention with their single Da Funk back in 1996.  It was a purely instrumental song with a driving beat and funky synthesizers.  The music video directed by Spike Jonze brought even more attention.  The video was a short film called Big City Nights. In the video, Da Funk played in the background behind the dialogue. 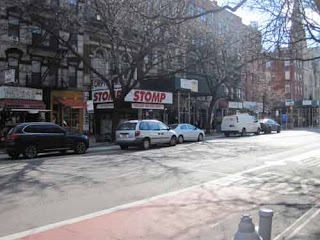 We were watching the music video for Da Funk and after the dog missed his bus (more on the video's plot later) we noticed something.   Down the street we could see a sign for the musical percussion peformance group STOMP.  In New York, STOMP has been performing at the Orpheum Theatre since 1994.  They are still going strong after more than 10,000 performances. 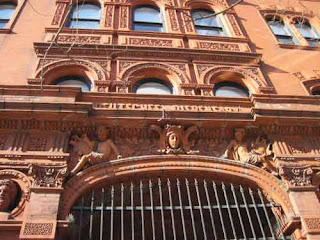 We did some research and found that a large part of the music video was filmed in New York's East Village on 2nd Avenue near the Ottendorfer Library.  The building was built in 1883 and one part is the library and another part is the Deutsches Dispensary (pictured above).  The building does not make an appearance in the video but its bus stop does as do some of the surrounding buildings.

The video follows Charles the dog as he hobbles through the street on crutches.  All the while his boom box with a broken volume knob is blasting Da Funk.  Charles is not a real dog but an actor in a costume.  Daft Punk also like to hide behind costumes and usually appear in public dressed as robots.  Charles tries to take a survey, buys a two dollar book called Big City Nights and eventually runs into an old neighbour. Charles the dog runs into Beatrice inside a variety store and they walk out into the street.  Beatrice invites Charles to "come with" for dinner downtown.  Charles agrees.  They wait for a bus outside of the East Village Meat Market.  The gold door on the left looks about the same but the white door (pictured above) used to also be gold back in the 90s. 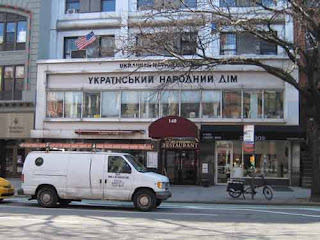 We know this is the right place as across the road is a restaurant.  You can see the words Ukranian Restaurant reflected in the window behind Charles. 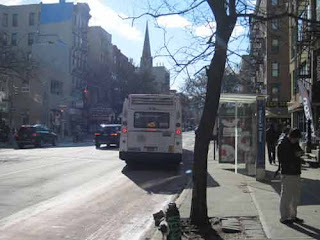 A bus pulls up and Beatrice gets on.  Charles wants to follow her but sees a sign stating "No Radios. No Smoking. No Spitting".  Now he must choose between his music and a girl.   The bus closes its doors and drives away.  Charles hobbles down the street alone.