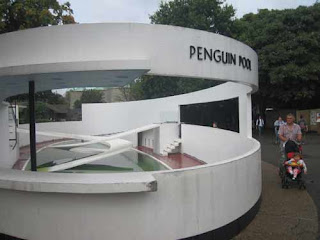 In 1934, London Zoo opened its famous spiral-ramped Penguin Pool.  The pool was designed by Berthold Lubetkin who worked for an architectural firm called Tecton.  It is one of the first uses of reinforced concrete and is a grade I listed structure in England.  A grade I listing is reserved for buildings of exceptional interest.

The movie About a Boy was released in 2002.  In the movie there is a small scene where Will (Hugh Grant) and Marcus (Nicholas Hoult) visit the zoo.  As they have their discussion they walk past the Penguin Pool.  There are still penguins in the enclosure as they did not leave until 2004. 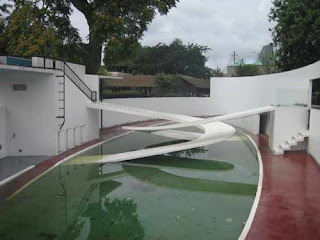 We saw a few reasons for the penguins moving out of the pool.  One said that they were contracting bumblefoot due to walking on concrete.  Bumblefoot is a bacterial infection on the feet of birds.  Some people say there was originally rubber over the concrete and it should be put back.  We also read they were moved to a duck pond during some repairs and seemed to really enjoy their new location.  Another lesser believed theory was based on the popularity of the About A Boy movie and the inclusion of the pool in the film.  It was said that the pool attracted too many Hugh Grant fans and the penguins requested to move to a new location where people came just to see them.  Who knows?  At any rate you can now visit the London Zoo and see the old exhibit which sits empty.  You can also see the colony of penguins who are happily living in a new area of the zoo called Penguin Beach.